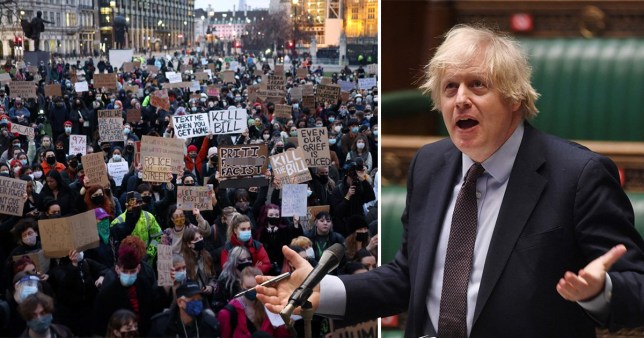 A controversial bill that would give police more powers to crack down on protests has cleared its first hurdle in the Commons, paving the way for it to become law.

The Police, Crime, Sentencing and Courts Bill passed its second reading on Tuesday night by 359-263 – a majority of 96 – and was overwhelmingly backed by Tory MPs.

Under the proposed plans, the legislation would make non-violent protests that cause ‘serious annoyance’ or are judged to be too noisy, punishable with a fine or up to 10 years in jail.

It also proposes to increase the maximum penalty for criminal damage of a memorial from three months to 10 years.

Labour had tabled an amendment to block the Bill from receiving a second reading but their defeat means it will now move onto the next Parliamentary stage and is a step closer to becoming law.

Opposition MPs had backed some sections of the legislation such as tougher sentences for serious crimes including child murder and sex offences – but warned it ‘rushes’ changes to protest laws and ‘fails’ to better protect women.

Hundreds yesterday marched through central London in protest of the Bill and violence against women in the wake of Sarah Everard’s death. 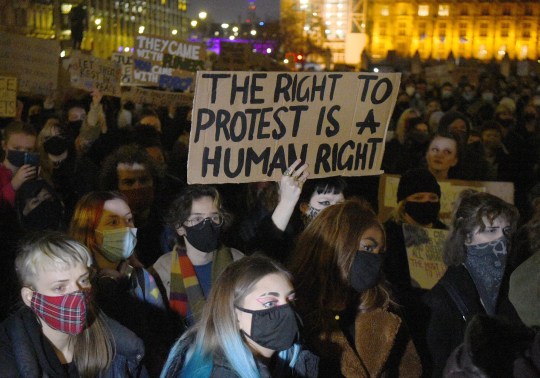 Hundreds marched through central London on Monday in protest of the Bill (Picture: PA)

The outcry against the Met Police’s handling of a vigil held in memory of the 33-year-old on Saturday has sparked a fresh focus on the Bill.

MPs warned during a fierce debate in the Commons that the ‘draconian’ plans would ‘make a dictator blush’ and showed the Government’s ‘descent into authoritarianism’.

She told MPs: ‘I attended the Black Lives Matter demonstrations in Nottingham East and the protest and vigils at Scotland Yard and Parliament on Sunday and yesterday. We took to the streets because people are angry, we’re hurting, we’re sick of male violence.

‘We are sick of male violence whether it is at the hands of the state, our partners, our family members or strangers. And we march because some people don’t survive male violence.’