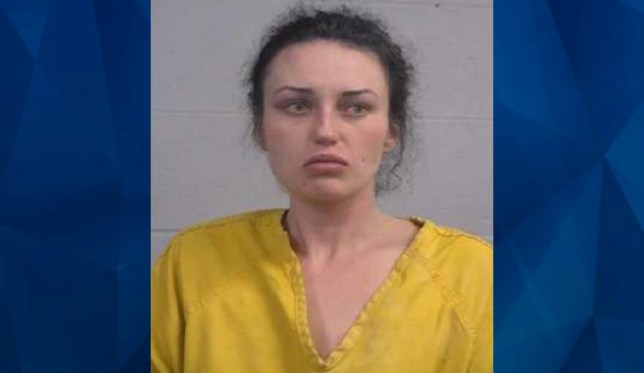 Kaitlyn Higgins allegedly tried to cut her son’s tongue, shot him and put his body in the trunk of her vehicle (Picture: Louisville Metro Police Department)

A mother allegedly tried to cut her 10-year-old son’s tongue out then proceeded to shoot him and leave his body in the trunk of her car. Kaitlyn Higgins, 28, was arrested early Wednesday after police found her son dead with a gunshot wound.

The Louisville Metro Police Department received a call about Higgins with a gun and a dead boy wrapped in a blanket, WLKY reported on Wednesday.

Officers who responded to the 1200 block of Algonquin Parkway in the Taylor-Berry neighborhood of Louisville, Kentucky, on Tuesday and found Higgins on the porch with what appeared to be blood on the front steps of the home.

Cops conducted a search of the area and were led to open the trunk of a vehicle that Higgins claimed was hers, revealing a deceased boy with a gunshot wound.

Higgins admitted that she made an effort to cut the boy’s tongue and shoot him and put him in the trunk, officers said. The boy’s identity has not been released.

The mother is charged with murder-domestic violence as well as tampering with physical evidence. Her bond was set at $250,000 and her arraignment is scheduled for Thursday.

Higgins also has a two-year-old child who is under the care of her relatives, according to the police department.

Chris and Jim Banks, who live across the street from the home, were devastated to hear of the crime in what they feel is a safe neighborhood.

‘Oh, my goodness’, Chris told the Louisville Courier Journal on Wednesday. ‘That just breaks my heart’.