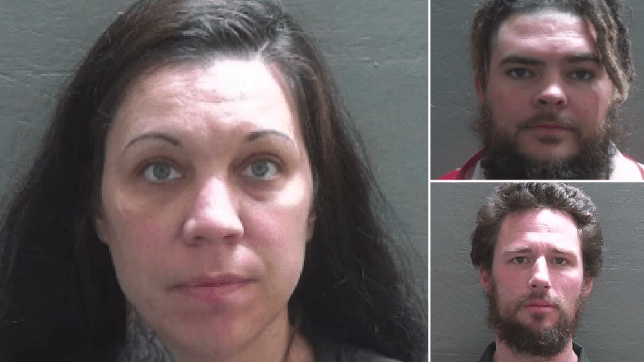 A mother took one of her friends on an outing to murder her daughter’s boyfriend, police say. Dawn Sluder, 38, allegedly brought Jonathan Hobbs, 28, with her to help shoot Danny Blackmon, 35, dead in Cantonment, Florida, on Monday. Hobbs allegedly fired the fatal shots after ignoring Sluder’s daughter’s shouts of ‘No!’

Two days before the shooting, Sluder took to Facebook to claim Blackmon had abducted her daughter. She wrote: ‘This is my oldest baby Crystal Hassell she is 19 and missing. We are all looking for her! A man named Danny Ray Blackmon has Tookin her agenst her will .

Sluder allegedly arrived at Blackmon’s home several hours before his murder, and barricaded herself inside. Her daughter called Escambia County Sheriff’s Office, but Sluder had left by the time deputies arrived, so they left too, it is claimed.

She is then said to have waited in her car with Hobbs for Blackmon, culminating in a confrontation that ended with Blackmon being shot dead.

After the shooting, Sluder allegedly reversed her GMC SUV into her daughter’s truck.

She is then said to have beaten and struck her daughter, and tried dragging the stricken woman away as she performed CPR on her boyfriend.

She left the scene, and was arrested shortly afterwards. Hobbs turned himself into investigators, WKRG reported.

Investigators have not explained the reason for the animosity between Sluder and Blackmon, who had multiple previous arrests.