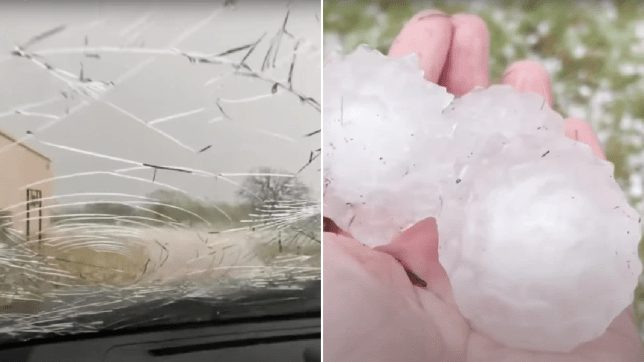 Hail that was so big and mighty that it was deemed ‘gorilla’-like pounded parts of Texas, smashing windshields and denting other property. The extreme weather event was witnessed and recorded by various Texans who were both in awe and likely later in anguish over the amount of destruction on Monday evening.

Storm chaser Reed Timmer, who coined the term ‘gorilla’ hail, recorded a more than six-minute-long video from inside a car of the storm just west of Llano. Baseball-sized hail could be heard pummeling the vehicle nonstop and the windshield sustained major cracks all over. The massive hail actually broke a back window.

‘Whoa we got glass inside the vehicle now’, someone could be heard saying at one point. ‘It’s coming in hot out of the northeast’.

When the hail let up, Timmer got out of the car and showed the roof of the vehicle, which was notably dented.

The so-called supercell thunderstorm was one of a few storms that produced hail up to the size of grapefruit, according to the National Oceanic and Atmospheric Administration (NOAA).

‘The hail was not only remarkable for its size, but also for the fact that it reportedly accumulated up to three inches on the ground in Llano, Texas’, NOAA stated on Tuesday.

Multiple spectators showed just how big the hailstones were by holding them in the palms of their hands or next to rulers. Some of the pellets were far larger than golf balls and littered backyards and fields for as far as the eye could see.

The National Weather Service said it received dozens of reports on Monday of the gigantic hail from the thunderstorms that hit the north and central parts of Texas. Last week, east Texas also experienced large hailstones and high winds that brought down trees and power lines.