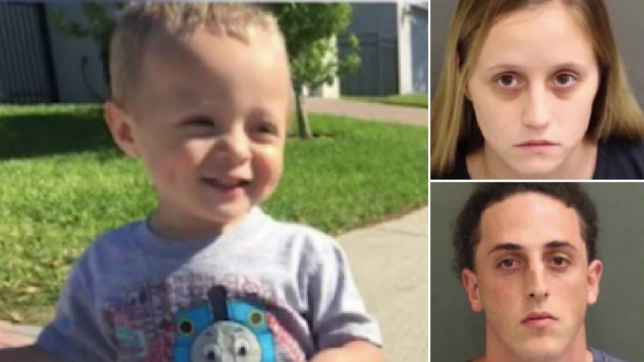 A mother has admitted her involvement in the violent death of her toddler son, who was punched so hard his intestines burst. Victoria Toth, 26, pleaded guilty to aggravated child neglect on Wednesday over the July 2018 killing of her son Jayce at the home she shared with her boyfriend in Orlando, Florida.

Jayce died because of an infection caused by his burst intestine. That wound is said to have been inflicted by a ‘sucker-punch’ style assault. Investigators said Jayce was tortured to death, and also arrested Toth’s boyfriend Johnathan Pursglove, 27, over the killing. He will attend a plea deal on March 3.

After being beaten, Jayce was allegedly left to suffer without any medical treatment for days. Toth called 911 after finding Jayce unresponsive at home. Paramedics who attended the scene found him covered in bruises, and vomiting up his own bile.

The two year-old died after being taken to hospital. Doctors said that Jayce could have survived his injuries, had he been treated sooner. Toth later told investigators that Pursglove cared for her son while she was at work.

Detectives have not said who they suspect of beating Jayce to death, but noted Pursglove’s history of domestic violence.

He is said to have inflicted violent ‘discipline’ on Jayce, and beaten Toth if she tried to intervene when Pursglove went too far.

The Orlando Sentinel reported that Toth had originally faced a charge of aggravated manslaughter over her son’s death.

Her father Steven Toth refuted claims she had been behind Jayce’s killing, insisting that the toddler meant ‘everything’ to his mother.

She faces up to 15 years behind bars for the crime. Pursglove still faces the aggravated manslaughter charge. The former couple are being held behind bars ahead of their next court appearances.