party fell far short in its attempt to win control in a fiercely contested state election, one in which its aggressive efforts to get out the vote have been criticized as worsening the country’s surge in Covid-19 infections.

Official results coming in early Monday showed Mr. Modi’s Bharatiya Janata Party was poised to win as many as 77 seats in the West Bengal state legislature—a sharp pickup from its previous showings but well short of a majority of the 292 seats being contested.

The state’s governing Trinamool Congress party was on track to win as many as 213 seats. The party is led by

a powerful regional politician who has at times been an outspoken critic of Mr. Modi. 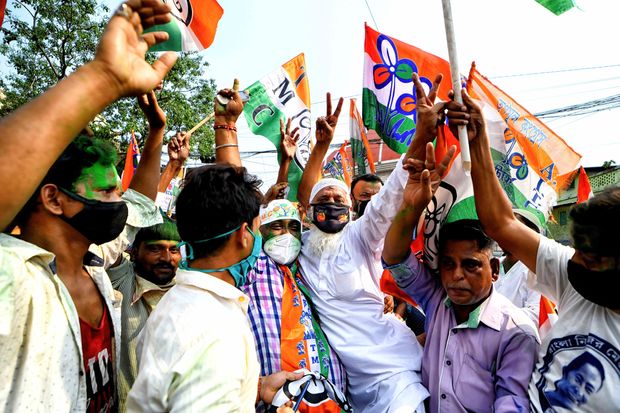 
Mr. Modi and other politicians drew criticism for holding campaign rallies attended by tens of thousands as a Covid-19 wave accelerated.

On Saturday, new cases in India topped 400,000 a day, a global record, amid a surge that has overwhelmed the healthcare system in hard-hit cities like New Delhi and spread to other states across the country. Hospitals have been turning patients away and running out of oxygen and Covid-19 medications, leaving sick people to care for their even sicker family members.

Much of the voting took place before the rise in cases turned into a full-blown crisis. But the way the campaign was conducted has been at the center of an angry debate over what fueled the current coronavirus wave.

Mr. Modi has been criticized for holding large rallies in April, even as new daily case numbers were exceeding 200,000 and climbing. Other parties also held large rallies, often with people crowding close together. In some cases, parties brought workers and supporters from other states to join the campaign in West Bengal.

New daily cases in West Bengal topped 17,000 late last week. When the election dates were first announced on Feb. 26, the state reported 216 new daily cases. Health experts say the rallies could have been one of the factors leading to the surge. 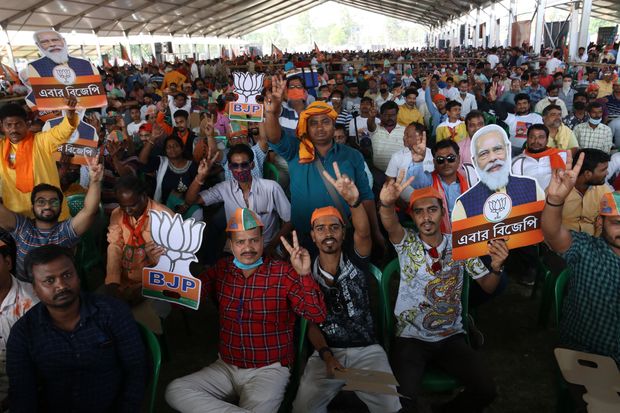 A BJP rally drew a large crowd of party supporters in Howrah on April 6.

The BJP canceled the final rallies of the campaign, national party spokesman Gopal Krishna Agarwal said previously, adding that no one had anticipated the magnitude of the Covid-19 surge. He said Mr. Modi and other members of the BJP followed all the safety protocols in place at the time.

West Bengal is one of the last remaining Hindu-majority states that isn’t controlled by Mr. Modi’s BJP. The state’s chief minister for the last 10 years, 66-year-old Ms. Banerjee of the Trinamool Congress, has resisted many policies of the central government led by Mr. Modi and his party, including a law that eases the path to citizenship for all immigrants except Muslims from India’s Muslim-majority neighbors.

West Bengal holds special significance in Indian history, culture and politics. The movement for the Indian subcontinent’s independence from British rule took root and gathered momentum in Bengal, an area that includes the state of West Bengal and what is now Bangladesh. Some of modern India’s most influential national icons—from Nobel Prize-winning poet Rabindranath Tagore to Hindu spiritual leader Vivekananda—were from Bengal.

The significance of West Bengal to Indian national discourse is captured in a sentence that leaders, including Mr. Modi, have often used: “What Bengal thinks today, India thinks tomorrow.”