A lamb left submerged in mud during last week’s heatwave was rescued ‘just in time’.

The young animal was stuck for days until being spotted by a passing dog walker on August 7.

It was then pulled to safety by a brave team from the RSPCA who had been joined by firefighters for the rescue.

The lamb had become stuck in a water course near Middlesbrough that had become a quagmire of mud due to the heatwave.

RSPCA inspector Steph Baines was called to Brass Castle Lane, Marton, by the dog walker who spotted the sheep stuck beneath an overhanging tree.

The poor animal ‘had sunk so far he was breathing bubbles in the mud’.

‘Even though he was a lamb, he was still quite big and he was stuck fast’, said Ms Baines.

‘I tried applying the hook of the pole around his neck, but because of the angle I was reaching out it was too tight and I realised he would have been hurt.

The poor lamb had been completely stuck in the thick mud (Picture: PA)

‘We needed to find another way to get to him.’

She then called the Cleveland Fire and Rescue Service for help, who mobilised a specialist underwater rescue team.

Two fire officers used a raft to travel across the mud, enabling one to ‘get the sling underneath the lamb’s neck’ and pull him safely on board.

Ms Baines added: ‘As soon as we got him to dry land I got him into the kennel. He didn’t put up much of a fight, the poor thing, as he was shattered.’ 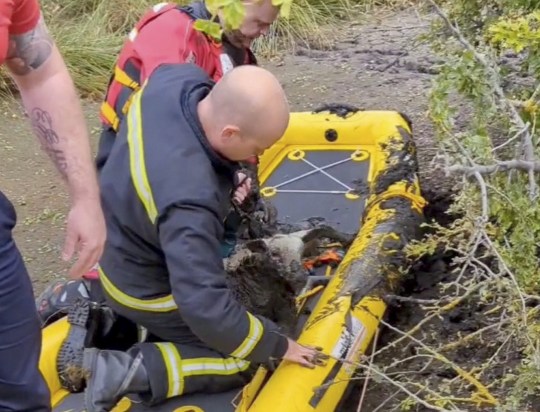 It was rescued by the RSPCA and Cleveland Fire and Rescue Service (Picture: North News & Pictures)

The lamb was then checked over by a vet before being safely returned to his flock.

He was said to be ‘exhausted and filthy’ but ‘otherwise okay’ following the traumatic experience.

Ms Baines added: ‘We tried hosing him down, although we didn’t want to get him too wet, so he’ll certainly stand out when he’s back with the flock.

‘But there was no doubt he was happy to be out. 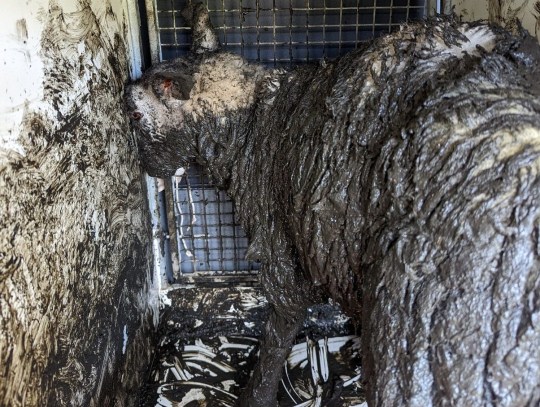 The weary lamb has been described as ‘exhausted’ but ‘otherwise okay’ (Picture: PA)

‘To be honest we got to him just in time as it was going dark.

‘I was having to hold my pole under his chin to keep his head above the water.’

It was the second time in the same week that a sheep had been found stuck in the mud, so the owner of the land was spoken to by the RSPCA inspector.

He has pledged to undertake repairs to fencing.