A 70-year-old American man has become the world’s first to receive a controversial new Alzheimer’s drug that costs $56,000 a year.

Mark Archambault, from Wakefield, Rhode Island, is the first patient to be treated with the drug, Aduhelm, following its approval for public use by the US Food and Drug Administration (FDA).

He received his first infusion on Wednesday in Providence at the Butler Hospital’s Memory and Aging Program, and described it as an ’emotional moment’. Archambault has early on-set Alzheimer’s disease and is the first patient to receive the drug outside of clinical trials.

Brown University Medical School neurology, professor Dr Stephen Salloway, said the roll out of the new drug marks the opening of ‘a new era in treatment’ for Alzheimer’s. He added that the Butler Hospital program has around 100 patients who could receive the drug in the coming weeks and months.

Aduhelm, which is given as a monthly intravenous infusion, was approved based on evidence that it can reduce brain plaques, a likely contributor to Alzheimer’s, rather than proof that it slows progression of the fatal mind-wasting disease.

It was given approval by the FDA despite some objections from its own expert advisory panel, who were worried that Aduhelm has only been tested for patients in the early stages of the disease in trials.

‘Hopefully clinicians will follow the clinical trial guidelines, because we really don’t have any evidence for more advanced patients with Alzheimer’s’, Salloway added.

Biogen, the makes of the Aduhelm drug, has estimated that around 1.5 million of the 6 million people in the United States with Alzheimer’s would be considered to have early-stage disease, and therefore eligible to receive it.

Biogen, which partnered with Japanese drugmaker Eisai to make the drug, has set an average price of $56,000 a year, which the Alzheimer’s Association – a longtime outspoken supporter of Biogen – called ‘simply unacceptable’. 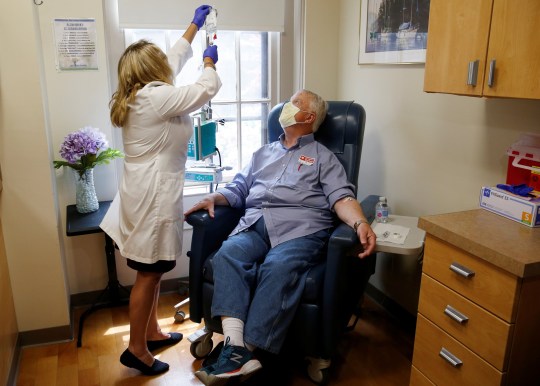 Mark Archambault looks up as Lisa Williams, research coordinator for the Memory and Aging Program at Butler Hospital as she begins intravenous infusion of Aduhelm (Picture: Reuters)

For the vast majority of patients who receive Aduhelm they will be covered financially by the federal Medicare health program. But Robert Egge, chief public policy officer at the Alzheimer’s Association, said most Medicare recipients are responsible for 20% of the cost of drugs given by doctors, and about 10% of them have no cap on those costs.

‘This could further exacerbate health equity challenges that we have across the country’, he said.

Biogen said it hoped the ‘value-based contract’ it agreed to with Cigna last week that will track the drug’s effectiveness was a step toward ‘efficient and affordable patient access’.

‘I am very happy to have this’, he said in a webcast news conference. 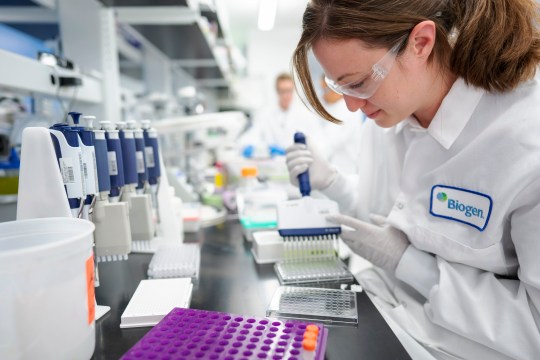 The US Food and Drug Administration issued accelerated approval for the experimental drug Aduhelm for use in patients with early onset Alzheimer’s disease (Picture: EPA)

Alzheimer’s, the most common cause of dementia, gradually attacks areas of the brain needed for memory, reasoning, communication and basic daily tasks.

In the final stages of the disease, those afflicted lose the ability to swallow.

The drug Aduhelm aims to help clear harmful clumps of a protein called beta-amyloid from the brain.

Other experimental drugs have done that before but they made no difference in patients’ ability to think, care for themselves or live.