It was meant to have been a simple trip for Mahsa Amini.

The 22-year-old, originally from Saqqez in Iran, was travelling with her brother Kiaresh to Tehran, visiting loved ones.

However, she was stopped by Iran’s infamous Guidance Patrol, an element of Iran’s Law Enforcement Forces known colloquially as the ‘morality police’. Under the country’s strict Sharia law, men and women are expected to adhere to a ‘modest’ form of dress – but Iran’s morality police primarily target women, with the loose definition of modest meaning rules are ripe for interpretation – and thereby abuse.

Mahsa was pulled over by law enforcement for wearing her hijab – a veil worn over the head – too loosely, with a few strands of hair visible to passing crowds. In the ultra-conservative Iran, the punishment for being seen in public without a headscarf can include a prison sentence, flogging or a fine.

But while Mahsa was originally meant to be sent to a detention centre to undergo a ‘briefing class’, she never arrived. Instead, she ended up at Kasra hospital, where she died on Friday 16 September after three days in a coma.

Numerous conflicting reports have emerged in the days since Mahsa’s death. Tehran Police commander Hossein Rahimi claimed Mahsa had sudden heart failure after she was detained – something that has been refuted by the young woman’s own father, who contests his daughter had no underlying health conditions.

Meanwhile, testimony from eyewitnesses at the scene claim that Mahsa was beaten as she was taken into the van, and the hospital themselves declared that she was ‘brain dead on arrival’ in a now-deleted Instagram post.

‘Resuscitation was performed on the patient, the heartbeat returned and the patient was admitted to the intensive care unit,’ the post was reported to have said. ‘Unfortunately, after 48 hours on Friday, the patient suffered a cardiac arrest again, due to brain death. Despite the efforts of the medical team, they failed to revive her and the patient died.’

Mahsa Amini died after she was detained by the ‘morality police’ (Picture: Social Networks/ZUMA Press Wire/Shutterstock)

The tragic news has sparked over 10 days of protests across Iran, with women across the country taking to the streets of the country’s 31 provinces including Tehran, Shiraz and Yazd, potentially risking death to burn the veils they have been forced to wear, and hack off large chunks of their hair as an act of defiance.

Protestors have been heard chanting ‘death to the dictator’, and ‘women, life, freedom’ as they face down the Basij – volunteers in Iran’s paramilitary Revolutionary Guard who have no fear about resorting to violence to quell demonstrators.

Now, their fight for freedom has sparked similar scenes across the world, with demonstrators taking towards the Iranian embassy in London in order to show their support for their sisters in Iran who are willing to fight for their rights.

Lily* has been protesting against the Iranian regime for over four decades. Originally born in Iran, she left the country shortly before the 1979 revolution which saw the instillation of its hard-lined theocracy. One of their first acts in government was making the hijab compulsory for women. 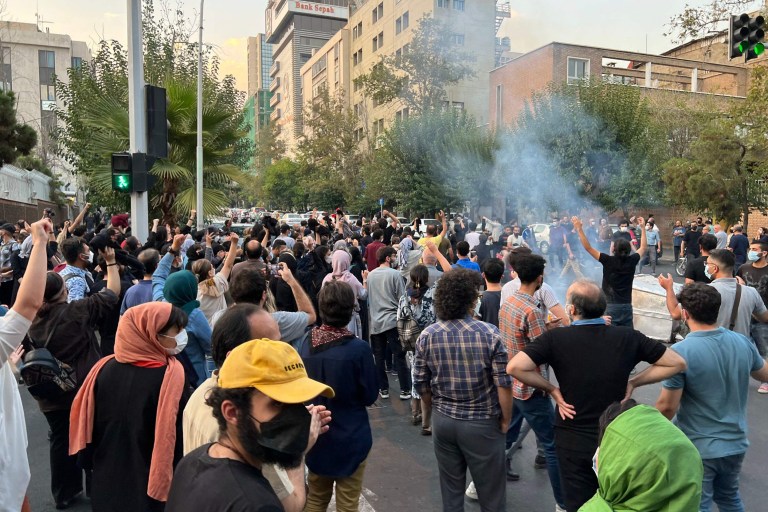 Lily now believes that Iran may be on the cusp of major change, having been taken aback at how many people joined her at the protest in London.

‘The people of Iran are really fed up,’ she tells Metro.co.uk. ‘It’s been over 40 years and nothing has improved for them.

‘Women haven’t got any rights in Iran, really. If they don’t observe Islamic law, they will face huge punishments, arrest or worse. The whole country is suffering, but people are usually afraid to talk. This time, people are ready to fight.

‘Even though many people are risking their lives in Iran by protesting, they’re still ready to fight. I don’t think this is going to stop.’

Mahsa’s death is not in isolation, with the news coming after a series of smaller scale demonstrations and incidents that were taking place in the country.

Not only is there general civil unrest that has been triggered by high unemployment and inflation, there have been ongoing protests after Iranian president, Ebrahim Raisi, cracked down on hijab compliance laws, and called for stricter rule enforcement earlier this year.

However, Mahsa’s death is certainly oil to flames that were already beginning to burn across the country.

For Maryam Namazie, who fled Iran in 1980 after the revolution, the focus on the enforced veil rules is the clearest and most visible means of the Iranian regime’s desire to control women. 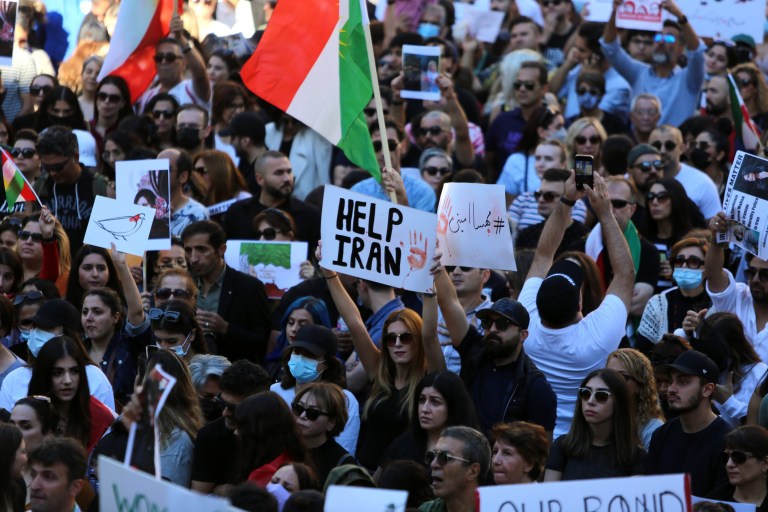 ‘Mahsa’s death provoked rage, but we have to recognise that this is not an isolated incident,’ explains Maryam, who also attended the London protests against forced veil wearing. ‘If you look at the Handmaid’s Tale, people talk about it as fiction. But it is real life in Iran. We’re talking about a government that legally discriminates against women and legally imposes and encourages violence against us.

‘Sharia law means women are effectively criminalised if they are anything but submissive. It means a women’s testimony is only worth half of a man’s. If you want to receive inheritance, you’ll get half of what your brother will get. You can’t be a female singer or musician and sing on your own on stage. Gender segregation means men and women have to be separated all the time. If women get on the bus, they need to sit at the back. It’s like racial apartheid in South Africa or during the Jim Crow laws in the US. A compulsory veil is part of that segregation.

‘What’s wonderful now is that despite all of this, the women in Iran are pushing back. Mahsa’s tragic death has also become a symbol of Iranian women’s ongoing plight. We cannot ignore the regime’s naked brutality towards women.

‘With all of these restrictions, it’s no wonder women are at the forefront of this movement. It’s no wonder that this is a women’s revolution in the making.’

If you look at the Handmaid’s Tale, people talk about it as fiction. But it is real life in Iran.

With no sign of the furore abating amongst those in Iran, President Ebrahim Raisi has said he will ‘deal decisively’ with protestors, with other officials calling for ‘a need for action without leniency.’

Official reports claim that around 41 people, mostly protestors, have died since civil unrest began. However, it is thought the real number could be much higher.

Among some of the more high-profile deaths include Hadis Najafi, a 20-year-old who was shot six times by the Islamic Republic’s security services. Images of Hadis have been widely shared on social media, giving a sickening contrast of her smiling and singing to camera, before we see her tying her hair back as she joins protests, and images of her bloodied, badly wounded body in her final moments.

Meanwhile, videos of four other female protestors are being widely shared, as they have all been arrested for eschewing the compulsory hijab and encouraging others to do the same.

In a bid to curb further demonstrations, the people of Iran have been subjected to ongoing internet blackouts. 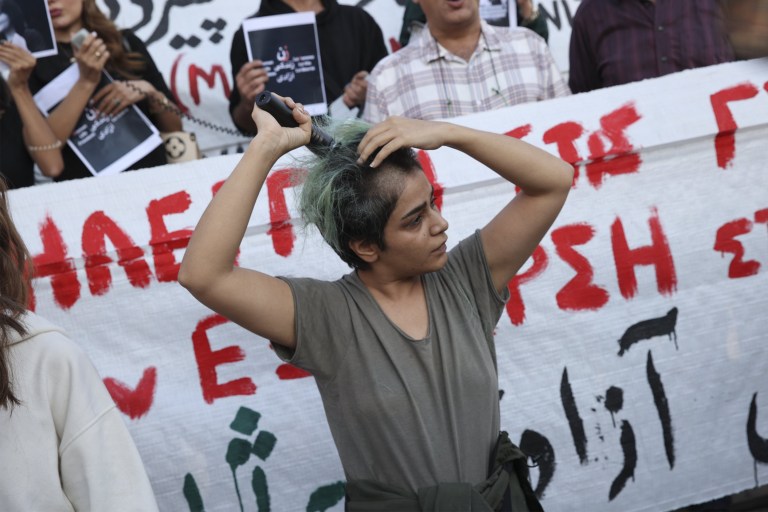 Women have cut their hair and burned their veils in protest of Mahsa’s arrest and death (Picture: Ayhan Mehmet/Anadolu Agency via Getty Images)

Elsewhere, social media and blogging sites such as Facebook and Twitter were previously blocked and monitored by the regime.

To try and fight the government crackdown, SpaceX CEO Elon Musk has offered his own uncensored internet service, Starlink, to people in Iran – however, it faces numerous obstacles, such as the delivery of tech to the area, in order for it to be effective.

The blackouts have made Lily fearful, she admits, as she still has close family living in Iran.

‘I’ve been trying to get hold of my sister and nephews for the last few days,’ she says. ‘I can’t get any of them on the phone as their internet has been shut down. The government has threatened that if people continue to demonstrate, they will cut the internet to stop people communicating.’

You are mistaken if you think this is not your problem.

Even under the cloak of anonymity, Lily was still palpably nervous to speak out just in case her family across the world could face some sort of repercussion. She even wore a disguise to the London protests, in an attempt to not be recognised.

Maryam has already been targeted by the Iranian regime. She was described as ‘immoral’, ‘corrupt’ and ‘a harlot’ by the Islamic Republic, after she participated in a picnic protest against forced fasting in Ramadan.

Even so, she refuses to back down and is calling for more people to join protests around the world to show an allyship towards the women in Iran.

‘We have to promote this cause as much as possible,’ says Maryam. ‘We need personalities speaking up and asking for support and solidarity with the Iranian people. The more likely we keep it in the news, then Iran can’t try and hide this story.’ 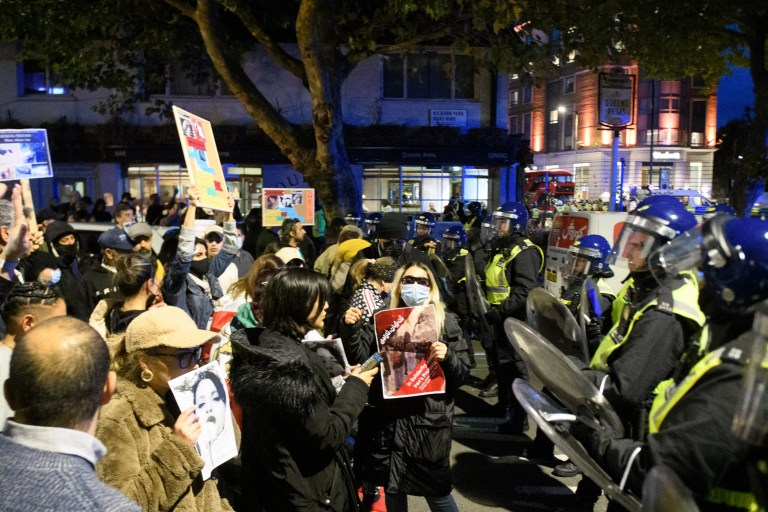 Protests also took place in London this weekend, out of support for those demonstrating in Iran (Picture: Peter Manning/London News Pictures)

She adds that more pressure needs to be placed upon the regime by the West.

‘The Islamic regime of Iran has been in power because Western governments support it. We have unprecedented protests in Iran and yet the US gives the President of Iran a visa to come and speak at the UN,’ she says.

‘Western governments need to stop their relationship with the Iranian government over their human rights violations. The only way they do that is if the public demands that it be so.

‘We saw how this happened in South Africa because of public outrage over Apartheid, and that brought about its end. We need the public on our side and people need to understand this is their fight as well.

‘We need solidarity, women especially, to see this as their feminist struggle,’ Maryam goes on.

‘We see it in the rise of Christian right attacking abortion rights and LGBT rights. You are mistaken if you think this is not your problem. It is linked. They feed off each other, they are recruiting grounds for each other and they have fundamentally the same politics, particularly targeting women first and foremost. It’s a universal fight for all of us.’