On Tuesday, Bengal reported both its highest single-day deaths of 107 COVID patients and its highest one-day spike of 17,639 cases 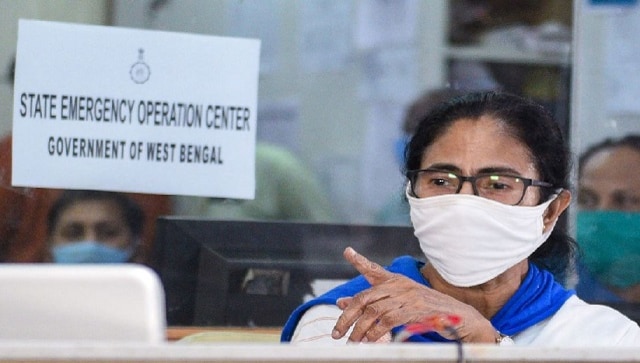 including suspending local trains and capping attendance at government offices at 50 percent.

Mamata, following a high-level meeting with top officials, said that metro rail and state transport services will be curtailed by 50 percent from Thursday, as part of the newly imposed set of restrictions, reported PTI.

“Local trains will be suspended from tomorrow. State- run transport and metro services will be reduced by 50 percent. Starting 7 May, air passengers will be allowed in Bengal only if they carry RT-PCR negative report, which is not older than 72 hours prior to boarding,” Mamata said.. She further underlined that people entering the state via long-distance trains and inter-state buses should also carry RT-PCR negative reports with them.

News18 reported that as per the fresh curbs, all social and political gatherings have been prohibited and sanitisation of market places, educational institutions and offices has been made mandatory. Emergency and essential services, law and order, telecom will remain outside the purview of the restrictions. Museums, planetariums, zoos and national parks have been closed to avoid contamination, as per News18.

As per LiveMint, all markets, retailers and standalone shops will be allowed to function only between the hours of 7 and 10 am and 5 an 7 pm. Jewellery shops across the state will remain open from noon to 3 pm and home delivery will be encouraged, as per the report.

Banks will be operational from 10 am to 2 pm, and government offices have been told to make do with 50 percent workforce, Mamata said at the press meet, as per PTI. All shopping malls, salons, restaurants, bars, sports complexes, gyms, spas and swimming pools would continue to remain closed for the time being, the chief minister added. The state administration has also requested private firms to encourage work from home, the chief minister said.

This comes just hours after Mamata, during her swearing-in as chief minister today in a low-key ceremony at Raj Bhawan, said her first priority is to tackle the COVID-19

“My first priority is to control COVID-19

. I am now going to Nabanna (state administration headquarter). There I will hold a meeting with my officers. and will take necessary measures to control covid immediately,” she said, as per Indian Express. “I will address the media in the evening.”

Mamata on Wednesday also wrote to Prime Minister Narendra Modi requested him to allow free-of-cost vaccination against COVID for all, and asked him to ensure adequate supply of essential drugs and hike allocation of medical oxygen for West Bengal, as per Indian Express.

was incidental. North 24 Parganas district and Kolkata reported 33 and 31 fresh fatalities respectively. The remaining deaths were registered in several other districts.

The 17,639 fresh positive cases included 3,954 from North 24 Parganas district and 3,914 from Kolkata. Since Monday, 57,748 samples were tested in West Bengal for the virus, taking the total number of such tests to 1,06,58,094. The total number of people inoculated in West Bengal on Tuesday was 1,34,819. The inoculation process for people belonging to the 18-44 years age bracket started at two private hospitals in Kolkata on Tuesday.

Meanwhile, the state health department dismissed rumours regarding the shortage of Remdesisir and said that companies ‘should allocate the drug to clinical establishments on the basis of CCU bed strength and the rate of occupancy there’. Companies would not be able to sell them to individuals against any doctor’s prescription, the department said issuing a similar advisory for the usage of Tocilizumab drug.

cases continued to skyrocket in the state.