COPS searching for Leah Croucher today admitted they never looked inside the house where human remains were discovered during their hunt for the missing teen.

Instead, officers from Thames Valley Police “knocked and dropped leaflets through the letterbox” during their their search for the missing 19-year-old in 2019. 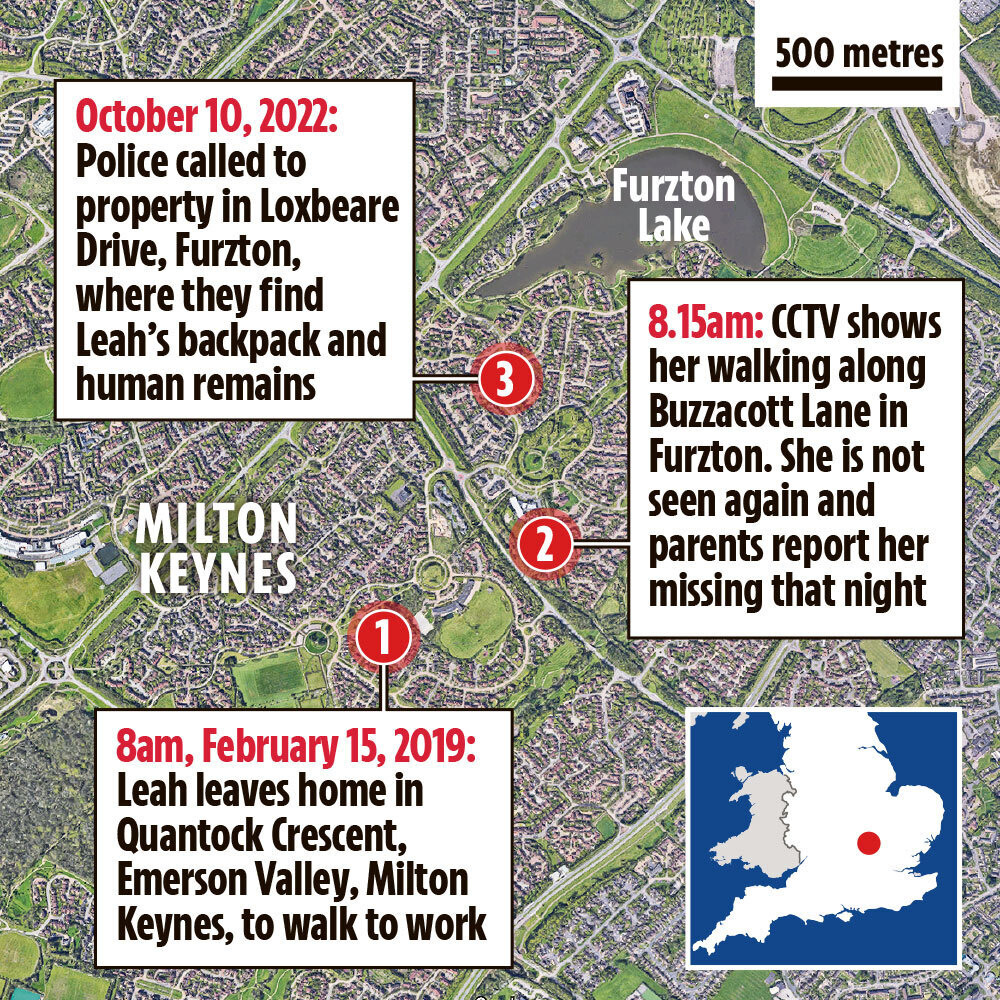 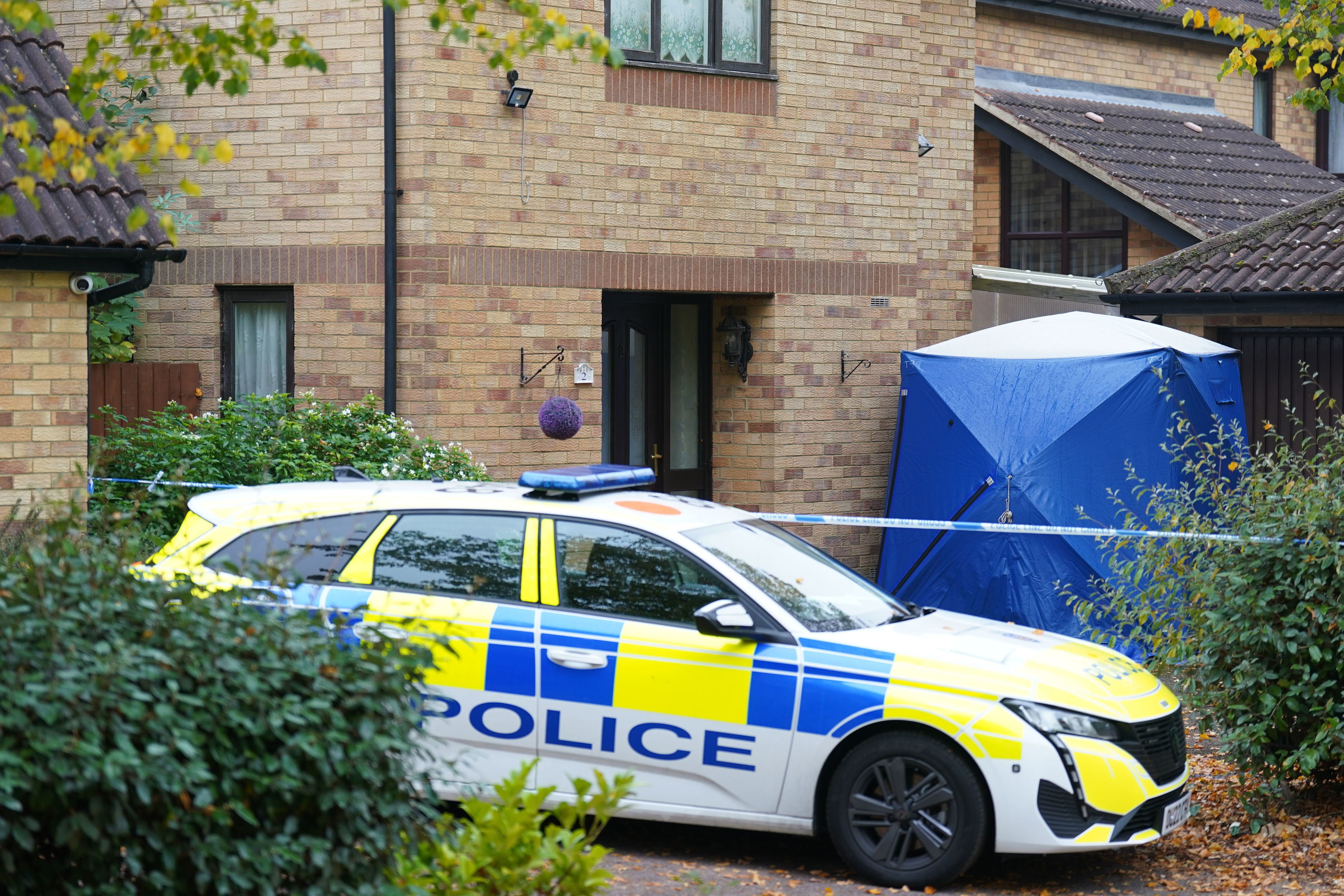 Cops never looked inside the house where human remains were discovered during their hunt for missing Leah Croucher three years agoCredit: PA

The admission comes as it’s revealed a convicted paedophile who appeared on a national TV crime show used to live in the house on Loxbeare Drive, Milton Keynes, Bucks.

He was locked up in 2017 for sexual offences against two teenagers over a two-year period.

The paedophile was not living there when Leah went missing and locals say the property has been empty since 2019.

On Monday, human remains alongside a rucksack and personal items belonging to Leah were found at the house. 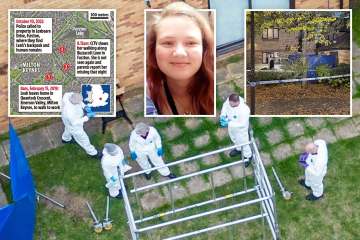 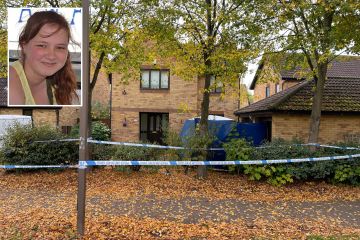 A Thames Valley Police spokesperson said: “Monday was the first time we were alerted to this property by a member of the public in connection with this investigation.

“As such, we can confirm that the house has never been entered as part of the original investigation.

“However, as an address in Furzton, the address was visited as part our house to house enquiries as part of the investigation, during which we visited more than 4,000 addresses.

“There was no response at the property and as such leaflets would have been dropped through the letterbox.”

Leah – who vanished on her way to work in February 2019 – lived just 10 minutes away from the £500k property and walked past it every day.

It is 500 yards from where she was last seen.

And it has since been confirmed a convicted paedophile used to live in the house.

He was not living there when Leah went missing and locals say the property has been empty since 2019.

The paedophile’s dad said the family moved out of the house years before Leah vanished, but they were aware of her disappearance.

His mother told The Times she had “not seen him for years”.

It is understood the property is owned by a Kuwaiti businesswoman who let it out but she has no connection to the current police inquiry.

Cleaners are understood to have been working upstairs when they spotted the hidden remains, sparking a police search of the house.

Jill Davey, who lives close to the house, said: “Leah used to walk past the house every day. I would see her walking to work.

“It just sickens me. The police were meant to have searched all the houses around here, but they obviously didn’t do their job properly.”

The taekwondo fan was described by loved ones as “very quiet” and “not really an outgoing type of person”, preferring to read fantasy fiction or watch DVDs in her room to nights out at the pub. 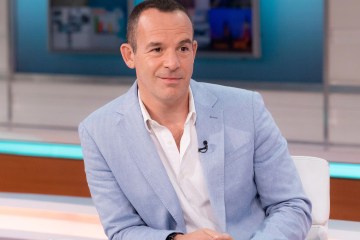 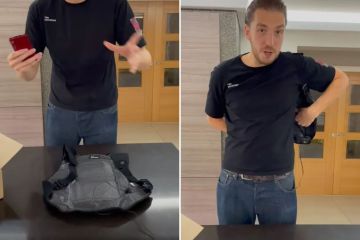 Nine months after Leah’s disappearance, her heartbroken brother Hayden Croucher, 24, was discovered by his mother and sister Jade hanged at his flat and later died in hospital.

In a statement on the anniversary of Leah’s disappearance last February, her parents posted on social media: “Each day is torture. Each day feels like an eternity of pain and despair.” 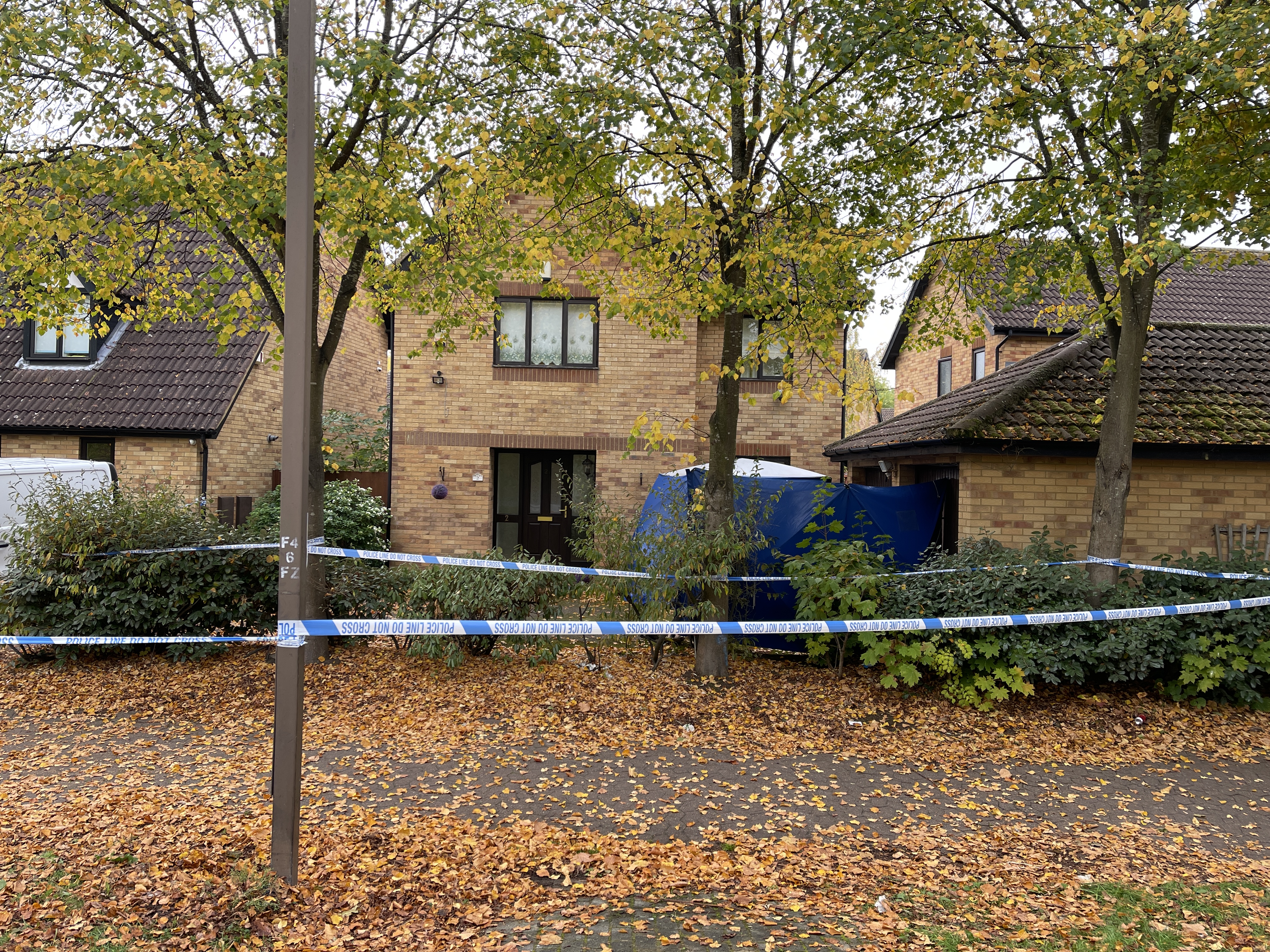 Police have spent two days searching a house in the areaCredit: w8media 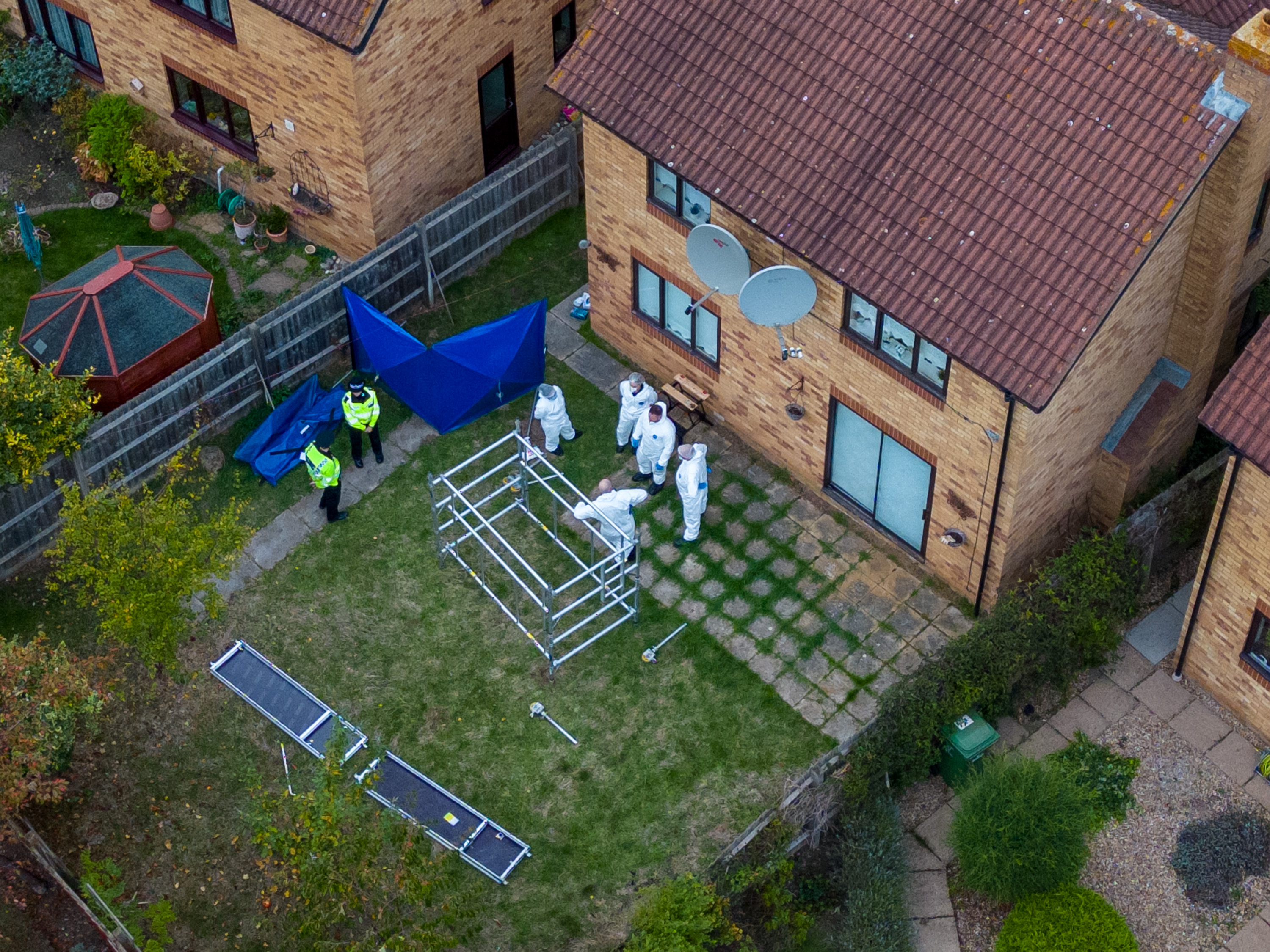 Forensic investigators set up scaffolding at the rear of the property following the discovery of human remainsCredit: LNP 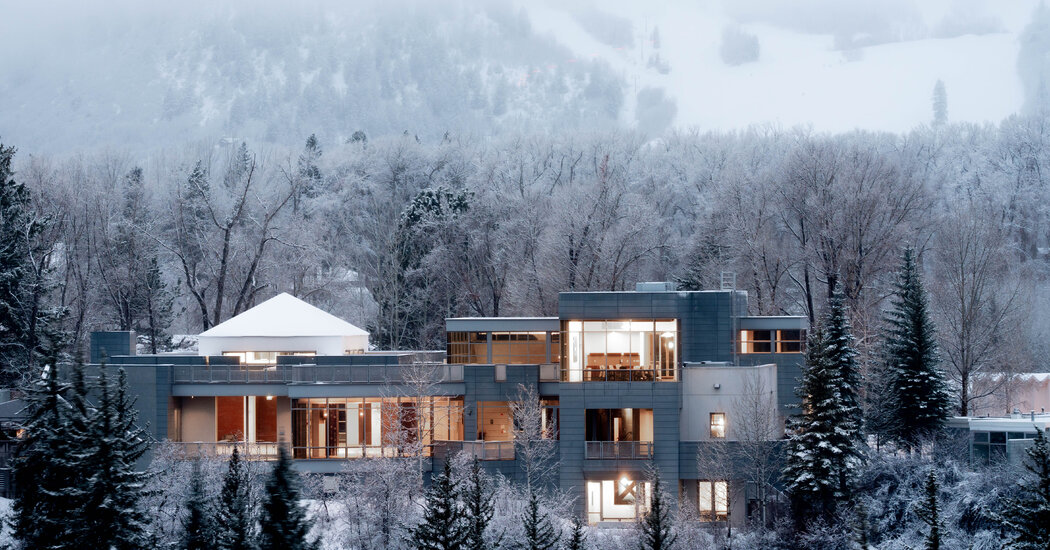