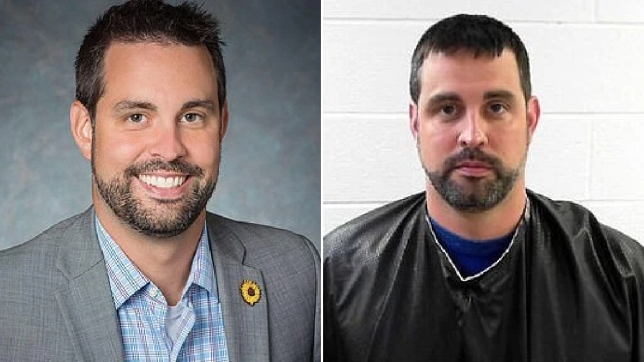 Videos that students and parents shared with The Kansas City Star showed Samsel mostly targeting one male student during the episode on Wednesday. Samsel, who was subbing in at Wellsville High School near of Kansas City, appeared to grab the student pacing around the classroom and put his arms around him.

‘You’re about ready to anger me and get the wrath of God. Do you believe me when I tell you that God has been speaking to me?’ Samsel said to the student in one clip. ‘You should run and scream.’

In another video, Samsel announced to the students: ‘Class, you have permission to kick him in the balls.’

Parents claim that Samsel ‘put hands on the student’ and then kneed him in his crotch. A video apparently recorded right after the incident showed the student on the ground as Samsel stood over him asking, ‘Did it hurt?’

Samsel also asked why the boy was at the point of crying, patted him on the shoulder, apologized and then told him, ‘Go to the nurse, she can check it for you.’

The substitute teacher then asked another student, ‘Do you want to check his nuts for him, please?’

School district officials reported the incident and the Wellsville Police Department and Franklin County Sheriff’s Office investigated. Samsel was arrested on Thursday and charged with misdemeanor battery. He was held at the Franklin County Adult Detention Center and posted $1,000 bond. Samsel has also posted on social media defending himself.

Kansas City Mayor Quinton Lucas tweeted that Samsel ‘shouldn’t just be terminated from substituting. He should be blocked from being around all kids.’

Samsel had also worked with children as a referee and in church groups.