Defendant Kyle Rittenhouse pulls numbers of jurors out of a tumbler during his trial at the Kenosha County Courthouse in Kenosha, Wisconsin (Picture: AP)

Prosecutors questioned whether the teen, who showed up at the three-day-long protest with an AR-style semi-automatic rifle and pretended to be an emergency medical technician, was really there to help others.

Rittenhouse’s defense team has maintained that his sense of patriotism compelled him to try and protect his community, but that he was forced to kill two people and injure a third to save his own life.

The events that transpired the third night of protests against racial injustice in Kenosha, Wisconsin could put Rittenhouse in prison for life if he is convicted of the most serious charge against him, first-degree intentional homicide. 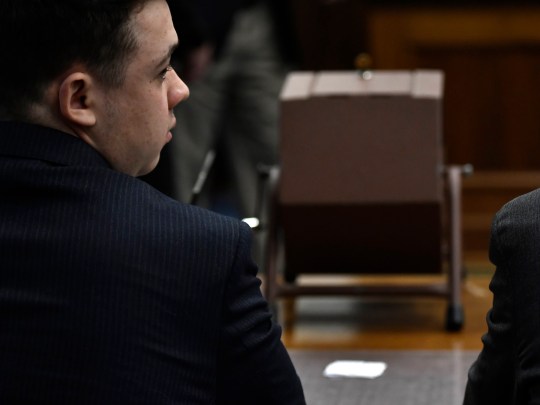 Jurors listened to a full day of competing closing arguments on Monday before returning the next day to start deliberations in the case that has sparked debate in the US over guns, vigilantism and law and order.

Of the 18 jurors who sat through the two-week trial, 12 were selected to decide Rittenhouse’s fate.

The teen himself was directed by the judge to draw six pieces of paper from a raffle drum to determine which jurors would be dismissed. Once the pieces were pulled from the drum, a court official read 11, 58, 14, 45, 9 and 52, who will serve as alternates.

That task is usually done by a courtroom clerk, not the defendant. 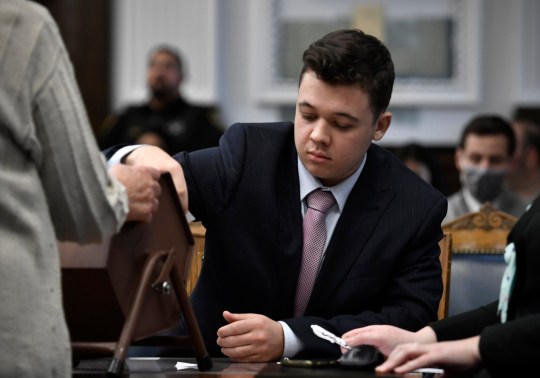 Of the 18 jurors who have been hearing the case, 12 were chosen by Kyle Rittenhouse, drawing from a raffle drum (Picture: AP)

Seven women and five men were picked, and all but one juror appeared to be white, NBC News reported.

Before closing arguments on Monday, Kenosha County Circuit Court Judge Bruce Schroeder dismissed a misdemeanor charge that Rittenhouse was a minor in possession of a firearm illegally.

According to the defense, the charge couldn’t apply because of an exception in the law. While the prosecution objected, the judge sided with the defense’s interpretation.

Prosecution sought to paint Rittenhouse as the aggressor on Monday, saying he created a dangerous situation by bringing his semi-automatic rifle to the protest, and often noting that Rittenhouse is ‘the only one who killed anyone’ during the three nights of protests.

Rittenhouse’s attorney countered that the shooting started after the teen was ambushed by a ‘crazy person’ that night and became afraid his gun was going to be wrestled away and used to kill him.

The trial, which began November 1, featured eight days of testimony from about 30 witnesses and more than a dozen videos from August 25, 2020. That night, Rittenhouse, who was 17 years old at the time, fatally shot Joseph Rosenbaum, 36, and Anthony Huber, 26, and wounded Gaige Grosskreutz, 28.

In his instructions to the court, Judge Schroeder said that to decide whether Rittenhouse acted lawfully in self-defense, the jury must conclude that he believed there was an unlawful threat to him and that the amount of force he used was reasonable and necessary.

Schroeder told the jurors if they decide that Rittenhouse acted lawfully in self-defense on the top offense, they should not consider the lesser charges.

‘You’re done, and you can return a not guilty verdict without considering the lesser offenses,’ Schroeder said.

On the witness stand, Grosskreutz said he approached the defendant with his own gun pointed toward him. Huber had hit Rittenhouse with a skateboard before he was fatally shot.

The teenager said of Huber: ‘He would’ve stomped my face if I hadn’t fired’, and added, ‘I fired one shot’.

Among the trial’s most compelling moments was Rittenhouse’s own testimony. During the six hours he was on the stand, Rittenhouse cried and also said he was afraid of Rosenbaum. Rittenhouse said he was scared that Rosenbaum would take his gun and kill him and others, and that he never wanted to kill anyone.

‘I didn’t do anything wrong. I defended myself,’ Rittenhouse said.

With a verdict near, Wisconsin Governor Tony Evers said that 500 National Guard members would be prepared for duty in Kenosha if local law enforcement requested them.