Allies of President Vladimir Putin’s top critics are planning to hold demonstrations on Saturday in dozens of cities in support of Opposition leader Navalny, who was arrested and held behind bars on his return to Russia following a near-fatal poisoning with a nerve agent 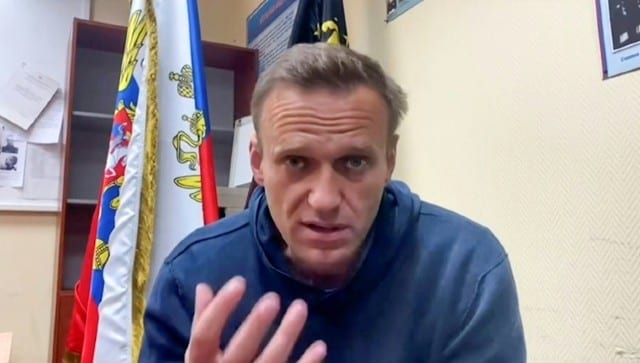 Alexei Navalny was arrested and put behind bars on his return to Russia following a near-fatal poisoning with a nerve agent. AFP

Russian authorities on Friday cracked down on allies of jailed Russian opposition politician Alexei Navalny and jailed his spokeswoman for nine days as police vowed to suppress protests this weekend.

Allies of President Vladimir Putin’s top critics are planning to hold demonstrations on Saturday in dozens of cities in support of the opposition politician, who was arrested and held behind bars on his return to Russia following a near-fatal poisoning with a nerve agent.

The last time major protests took place in Moscow was in the summer of 2019, and the Saturday rallies are expected to be a major test of the opposition’s ability to mobilise despite the increasing Kremlin pressure and the coronavirus

Police said unsanctioned public events will be “immediately suppressed,” as key opposition activists were detained on the eve of the rallies.

Navalny’s spokeswoman Kira Yarmysh, 31, who spent the night in detention, was sentenced to nine days in jail over violating legislation on public gatherings after a hearing that lasted less than five minutes, her lawyer Veronika Polyakova told AFP.

Another activist, Georgy Alburov, said he expected to be jailed for 10 days.

Key Navalny ally Lyubov Sobol is accused of repeatedly violating legislation on public gatherings, which carries a maximum fine of up to 300,000 rubles ($4,000), her lawyer Vladimir Voronin told AFP, who added that authorities could open a criminal probe against her later.

A number of Navalny associates were detained in the provinces and also received short jail terms.

Despite the increasing pressure, Navalny’s associates urged Russians to take to the streets and promised financial help to protesters given fines on Saturday.

In Moscow, demonstrators are being urged to gather in the city centre and then march towards the Kremlin.

In an Instagram post on Friday, the 44-year-old opposition politician’s wife Yulia Navalnaya wrote that she would join the protests in Moscow.

“For myself, for him, for our children, for the values and ideals that we share,” she wrote, explaining her decision to join the demonstrations. Alexei Navalny ally Lyubov Sobol is accused of repeatedly violating legislation on public gatherings and was fined 250,000 rubles (around $3,300). AFP

Many Russians took to social media — including TikTok, a short video app popular among teens, and even dating app Tinder — to voice support and urge a large turnout on Saturday.

The hashtag demanding freedom for Navalny was trending on TikTok as Russians posted thousands of videos.

“This is of course something shocking,” said political analyst Tatiana Stanovaya, adding that the TikTok “creative frenzy” should be closely watched.

Margarita Simonyan, editor-in-chief of Kremlin-backed broadcaster RT, accused the Chinese video-sharing app of trying to pit Russian “children” against each other.

The communications watchdog has cautioned social media platforms against encouraging minors to participate in the rallies and threatened them with fines of up to four million rubles ($53,000).

Roskomnadzor said on Friday the media platforms began removing the content in question.

Navalny last week returned to Russia from Germany, where he had been recovering from poisoning with the Novichok nerve agent in an attack he blamed on Putin.

After his arrest, his team released an investigation into an opulent Black Sea property allegedly owned by Putin.

The two-hour video report had been viewed more than 53 million times since its release on Tuesday, becoming the Kremlin critic’s most-watched YouTube investigation.

“Putin has nothing to do with this,” Peskov said, adding that the mansion might belong to a businessman.

A number of public figures — including those who usually steer clear of politics — have spoken out in Navalny’s support.

“This is not about politics but about civil society and justice,” she said.