What will you do if you become a millionaire suddenly? Probably, pay your debts, spend on yourself and your loved ones, travel, save some and invest the rest.

For a Kerala auto driver, this dream turned into reality last week when he won a whopping Rs 25 crore Onam lottery.

Hailing from Sreevaraham in Thiruvananthapuram, Anoop was on cloud nine after the results of the Thiruvonam bumper lottery were declared on 18 September. However, days after his bagging the first prize, the auto-rickshaw driver is ‘regretting’ the windfall.

Let’s look at Anoop winning the lottery and understand why he is now unhappy with his fortune.

32-year-old Anoop was in shock when he realised he has won the first prize in the Thiruvonam bumper lottery. Kerala Finance Minister KN Balagopal had announced the result at a lucky draw function at Gorky Bhavan in Thiruvananthapuram.

An excited Anoop told the media he bought the winning lottery ticket – TJ 750605– on 17 September, adding that it was not his first choice.

He had purchased a different ticket before and got it exchanged with the winning ticket as he did not like the first one, Anoop added.

The Onam lottery winner apprised that he had to break his child’s piggybank to buy the Rs 500 ticket as he was short of money.

Notably, Onam bumper lottery tickets created record sales this year, with over 66.5 lakh tickets being sold as compared to 54 lakh in 2021, reports The News Minute.

Before winning the jackpot, Anoop had plans to move to Malaysia to work as a chef and had applied for a loan of Rs 3 lakh, which was approved a day before the lottery result.

A rejoiced Anoop said he has told the bank he does not need the loan and he no longer wants to move to Malaysia. 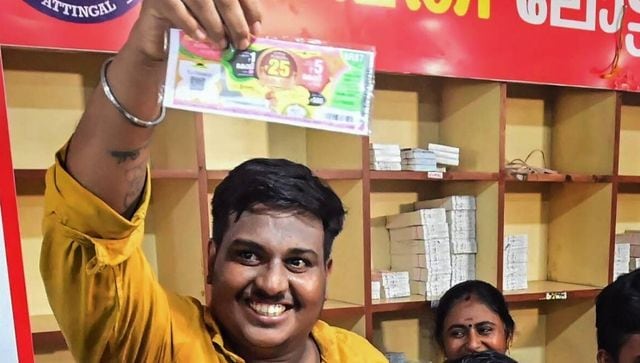 On his pennies from heaven, the auto driver said he had no expectations of winning.
“I was not expecting to win and therefore, I was not watching the lottery results on TV. However, when I checked my phone, I saw that I had won. I could not believe it and showed it to my wife. She confirmed that it was the winning number,” he was quoted as saying by PTI.

Anoop, who still was sceptical about the results, dialled a woman who sells lottery tickets and sent her a picture of his ticket, who then confirmed he is the lucky winner.

He has been spending money on lotteries for the last 22 years and has secured sums from a few hundred to a maximum of Rs 5,000 in the past, Anoop told PTI.

After tax deductions and the lottery agent’s commission, Anoop is slated to receive Rs 15.75 crore.

On what he intends to do with the large amount, he said his priority is to build a house for his family and clear his debts.

He also plans to help out his relatives, expend some amount on charity work and invest some in the hotel industry in Kerala.

The Kerala government has said it will organise a day’s training programme for Anoop on financial management to guide him on how to use the money judiciously, reports BBC.

As Anoop and his family came to terms with their unexpected fortune, the reality of winning the jackpot was soon to follow.

In a video shared on various social media platforms, Anoop has relayed his misfortune, saying people have swamped him with requests for financial aid.

He urged people to stop badgering him and his family. Kerala lottery winner, Anoop, said he and his family have to move to different places as people keep coming to his house seeking financial help. ANI File Photo

He said the situation has worsened so much that he cannot live in his own house or take his unwell son to see a doctor as people have been reaching his place from even far-off places, PTI reported.

“I have to keep changing houses. I went and stayed at my relative’s house, but somehow, people found that place and came there. Now I came to my house as my child is unwell. I cannot take my child to hospital as people are coming and seeking help. I have not even got any money,” a worried Anoop said in the video.

Anoop and his family have been staying at his sister’s house and other places, as per The Hindu.

The dejected winner said his neighbours were angry as the people kept flooding his house and the people he knows were upset with him as he has not promised them help, reports Economic Times.

“All I can tell everyone is that I haven’t gotten any money yet. No one seems to understand my problem, no matter how many times I say it,” Anoop was quoted as saying by BBC.

“I wish I hadn’t won,” he muttered, adding, “the third prize may have been better” for his “peace of mind”.