The woman later said her neighbour reacted to the situation ‘a little too defensively’ (Picture: @SirJoshuaBlack)

A woman was branded a ‘Karen’ after blaming a black neighbour for recent car break-ins in their flat building.

Josh Black said he was editing a video in his car, parked where he lives in Nashville, Tennessee, when she came up to him and asked ‘what he’s doing following her’.

Mr Black’s video of the ‘racist’ confrontation has now gone viral, but the woman told US media he got a ‘little too defensive about it’.

When he told her he’s lived in the building for five years, she said he fitted the description of whoever was breaking into cars.

But the description residents were actually given was a ‘white kid on a bike with a red backpack’, local news station WSMV-TV reported.

In the video, the woman can be seen explaining she was only questioning him because her car had previously been broken into.

When the woman says Mr Black matched the description of the carjacker, the comedian asks: ‘That’s crazy! They had on a pink hoodie, black nails and a backpack?!’

At one point, the man who was with the woman told her softly: ‘He’s like content creating, just don’t raise your voice.’

Mr Black hears this and says: ‘Man she did this. I’m not content creating. I’m a fucking influencer. If I wanted to, you’d be finished. Weird f**k.’ 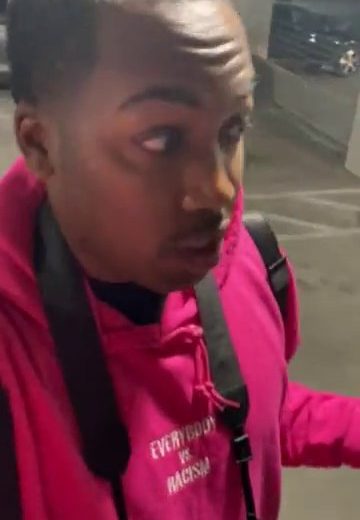 Mr Black did not believe the description given for a carjacker would be someone in a pink hoodie (Picture: @SirJoshuaBlack) 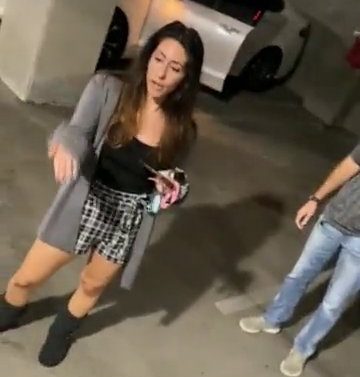 The woman apparently asked Mr Black why he was ‘following her’ (Picture: @SirJoshuaBlack)

As Mr Black walks away, speaking to his camera about a ‘white woman’, she shouts out that she is Mexican, not white.

The influencer laughs at her, mockingly repeating: ‘She’s Mexican.’

He ends the video shouting back at them: ‘Alright, good day Karen and whoever the f**k you are. Goof.’

Mr Black told WSMV-TV: ‘Unfortunately, that kind of racism is just normal. And we’ve become numb to it as black people.’