The Department of Justice is reportedly launching an investigation into former President Donald Trump removing boxes of records from the White House (Picture: AP)

The Department of Justice has reportedly taken steps to launch an investigation into ex-President Donald Trump’s removal of boxes of presidential records from the White House to his Mar-a-Lago residence.

Some of the boxes of documents subject to the probe were labeled ‘top secret’, sources with knowledge on the matter told the Washington Post on Thursday.

It is unclear whether Justice Department officials have already started looking at the records or seeking interviews with individuals believed to be involved in improperly removing them from the White House. The probe is in the very early stages, sources said.

The report comes as House Oversight Committee Chairwoman Carolyn Maloney accused the Justice Department of ‘interfering’ with the panel’s investigation by stopping the National Archives and Records Administration (NARA) from providing an inventory on the 15 recovered boxes. 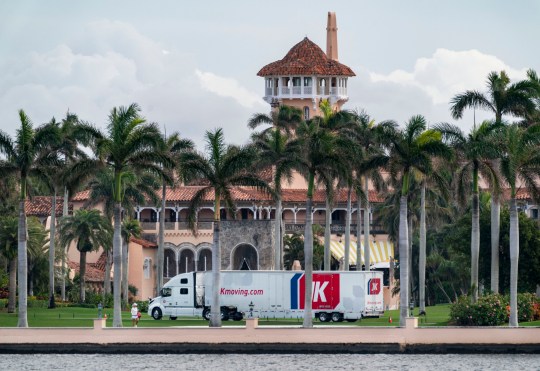 Ex-President Donald Trump took 15 boxes of presidential records from the White House with him to his Mar-a-Lago residence instead of transferring them to the National Archives and Records Administration (Picture: AP)

Maloney in a letter to Attorney General Merrick Garland on Thursday asked the Justice Department to explain why it was blocking the committee’s request for the detailed inventory of the documents.

‘The Committee does not wish to interfere in any manner with any potential or ongoing investigation by the Department of Justice,’ Maloney wrote.

‘However, the Committee has not received any explanation as to why the Department is preventing NARA from providing information to the Committee that relates to compliance with the (Presidential Records Act), including unclassified information describing the contents of the 15 boxes from Mar-a-Lago.’

If the department indeed plans to launch a probe, it could be the reason that it has blocked lawmakers from accessing the information.

An FBI spokeswoman told the Post: ‘We can neither confirm nor deny the existence of an investigation.’

Trump has denied wrongdoing and said he cooperated in the transfer. His spokesman Taylor Budowich in February defended his handling of the documents.

‘It is clear that a normal and routine process is being weaponized by anonymous, politically motivated government sources to peddle Fake News,’ Budowich stated at the time.