With a massive defence budget of $230 billion, China completely outguns Taiwan on the ground, in the air and at sea. This raises fears that the self-ruled island would be lost if Beijing chose to attack

China said the military drills in seas around Taiwan are “necessary and just” and its defence ministry has admitted that some exercises may breach Taiwan’s territorial waters.

On Thursday, as Beijing carried out “precision missile strikes”, Taiwan’s defence ministry said it was closely watching the drills and had activated related defence systems, adding that it condemned China’s irrational action, which destroyed regional peace.

The actions have led to concerns of whether China will take Taiwan by force. As this situation continues to loom large, we take a Just how strong is the Chinese military vis-à-vis Taiwan.

A woman uses her mobile phone as she walks in front of a large screen showing a news broadcast about China’s military exercises encircling Taiwan, in Beijing. AFP

Boots on the ground

If there is a war between China and Taiwan, how many people will be able to join the army?

China has more than five lakh (.5 million) reserved personnel, but on the other hand, Taiwan has an upper hand in this with 1.5 million reserves. Taiwan ranks number one in terms of reserve forces, while China is at number six.

In matters of towed and mobile rocket projectors too, China outdoes Taiwan, putting the self-ruled island at a great disadvantage.

The comparison in the air is also starkly lopsided. China’s air force has a total of 3,285 aircraft whereas Taiwan’s force is made up of 741 birds.

China also has 450 specialist bomber aircraft and 286 transport aircraft, whilst Taipei only has 19 transport planes and no bombers.

China has the world’s largest navy with a fleet strength of 777. Taiwan lags behind with 117.

Beijing also holds a massive naval advantage, with Taipei having no equivalent to its two aircraft carriers.

The Chinese can deploy 41 destroyers and 49 frigates, as against four and 22 respectively for Taiwan.

Taiwan doesn’t have any of either, and only has two diesel attack submarines versus 56 for China. 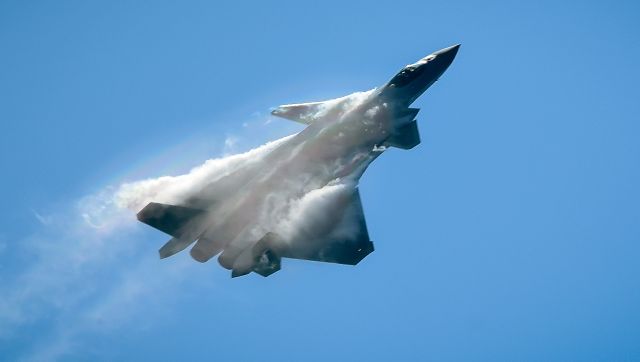 China is way more powerful than Taiwan in the skies. Beijing has a total of 3,285 aircraft, including the J-20 stealth fighter. AFP

China has not disclosed how many warheads it has, but the US Defence Department’s 2021 report on the Chinese military stated that China’s warhead stockpile was “currently estimated to be in the low-200s”, while the Stockholm International Peace Research Institute put the number at 350.

China’s nuclear build-up is being seen as one of the biggest threats to Western military supremacy.

Western experts believe that China also boasts of hypersonic missiles after the Asian behemoth carried out two tests last summer, a claim denied by Beijing. It’s unclear exactly what systems China may be developing, but the threat remains constant.

Dr Leoni in a BBC report said that while hypersonic missiles may not — on their own — be a gamechanger, they will make some targets highly vulnerable to attack.

Not all lost for Taiwan though

Despite China outgunning and outmanning Taiwan, Beijing won’t be able to invade the island so easily, if they wanted, as they could face the United States and Japan forces.

The United States has historically maintained a policy of “strategic ambiguity” over its intentions if Taiwan is invaded. However, in October 2021, President Joe Biden said the US has a “commitment” to defend Taiwan.

Japanese support for Taiwan has also become more forceful over the past couple of years, breaking with its previous policy. In June 2021 Yasuhide Nakayama, Japan’s then deputy defence minister, told a conference “we have to protect Taiwan, as a democratic country”.