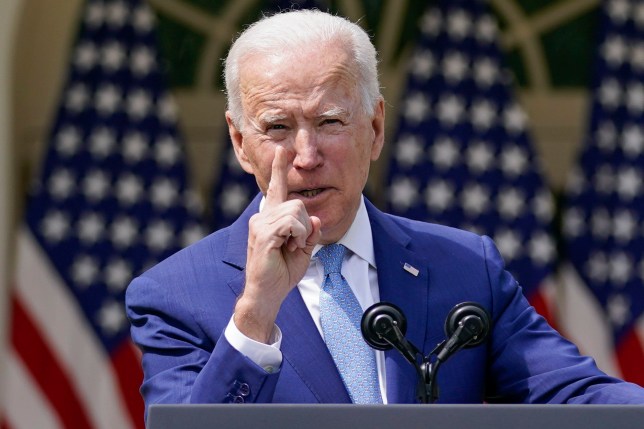 Joe Biden is pictured outside the White House on Thursday, where he announced a host of new gun control measures (Picture: AP)

Joe Biden has announced a crackdown on untraceable homemade ‘ghost guns’, after branding recent US gun massacres ‘an international embarrassment.’

The President of the United States said he had instructed the US Justice Department to reclassify ‘ghost guns’ as firearms, making it harder for people to buy and assemble the parts, which do not have serial numbers and are untraceable.

Speaking outside the White House on Thursday, Biden said: ‘These are guns that are homemade, built from a kit, that include directions on how to finish the firearm. They have no serial numbers, so when they show up at a crime scene they can’t be traced, and the buyers aren’t required to pass a background check.’

‘Anyone from a criminal to a terrorist can buy this kit, and within as little as 30 minutes assemble a firearm.’ Biden’s new rules will see vital parts inscribed with serial numbers, and anyone who buys a kit to register their personal details, so it can be traced back to them.

The president insisted he was not taking aim at the Second Amendment, which protects American’s right to bear arms. He said: ‘Nothing, nothing I am about to recommend impinges on the Second Amendment. Gun violence in this country is an epidemic – it’s an international embarrassment.’

Biden, whose guests included gun massacre survivors, and relatives of those killed in shootings, also called for new legislation which would end gun manufacturers’ exemption from lawsuits in the wake of deadly shootings.

And he announced plans for a crackdown on some gun modifications, including ‘stabilizing braces,’ that make pistols more accurate. Alleged Boulder supermarket shooter Ahmad Alissa is believed to have used such a brace during his massacre at a Colorado grocery store last month, which killed 10.

Biden says anyone wanting to modify their gun in such a way should be made to pay a $200 fee to the US Justice Department, and to submit their name as well. 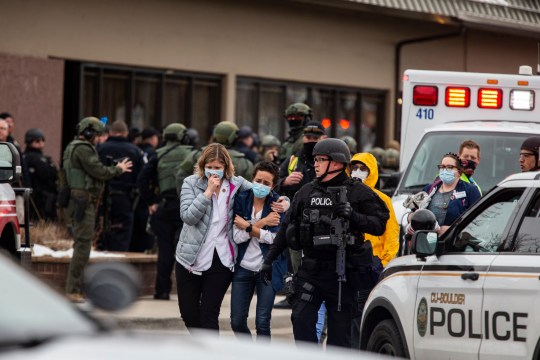 Survivors are escorted from King Soopers supermarket in Boulder, Colorado, on March 22 after a gun massacre that killed 10 people (Picture: AP)

The president went on to call for a national ‘red flag’ law which allows people to appeal to a court for a firearm to be legally removed from someone they believe may be a danger to themselves, or others.

Biden highlighted how more than half of all US suicides come at the hands of a gun – but if that firearms are not available, the death rate for suicide attempts drops ‘precipitiously.’

And he referenced Wednesday night’s shooting in Rock Hill, South Carolina, where Doctor Robert Lesslie, 70, his wife Barbara, 69, two of his grandkids and a man working on their house were all shot dead.

Ex-NFL star Phillip Adams – who was found dead of a suspected self-inflicted gunshot wound hours later – has been accused of the murders.

Biden said: ‘We saw it again last night, a physician with his wife, two grandchildren and a person working at his house was gunned down. All five, so many of the people sitting here today know that well, unfortunately.’

He went on to call for Congress to enact further gun control laws, saying: ‘No matter how long it takes, we’re going to get these passed. We’re not going to give up.’