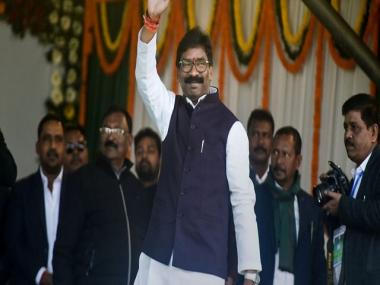 Jharkhand announced its exit from a Tripartite Agreement (TPA) between the state, Government of India (GOI) and Reserve Bank of India (RBI) after the cabinet approval. The TPA was invoked after the state government failed to clear its outstanding dues to Damodar Valley Corporation

Jharkhand chief minister Hemant Soren conducted a press conference last week after his Cabinet took the decision to exit the TPA – Tripartite Agreement – claiming it to be in the larger interest of the state.

In the press briefing, he claimed that the Centre deducted the money meant for the upliftment of the tribal and marginalised sections of the society. Soren and principal secretary Avinash Kumar have repeatedly claimed that the amount which was deducted was provided by the 15th Finance Commission for the social welfare schemes in the state. They were referring to Union Power Ministry’s direction to RBI in October last year, seeking auto deduction from Jharkhand’s consolidated account in RBI by invoking TPA of 2017. Despite Jharkhand’s exiting the agreement, the Centre again deducted Rs 714 crore as the second installment of unhealthy recovery of power dues.

In the year 2017, the then chief minister of Raghubar Das signed a ‘Tripartite Agreement’ with the Union power ministry and RBI for purchasing power from the Damodar Valley Corporation (DVC). The agreement was a payment security to the DVC for purchase of electricity and If the state power unit, JBVNL, fails to do so, the Jharkhand government shall become the principal debtor, and would be liable to pay the debt to the DVC. In such a case, the agreement empowers the Centre to auto-debit dues from the state coffers (Jharkhand’s account in the RBI).

The power ministry directed RBI to deduct four installments of Rs 1417.5 crore from Jharkhand’s consolidated account. This led to a tussle between the state and the Centre. Soren termed the process as a veiled conspiracy to financially paralyse Jharkhand by imposing fiscal penalties. This was the first instance when the Hemant Soren-led government and the energy department showed lack of faith in the TPA, by claiming that it was ‘lopsided’.

During the press briefing, the chief minister expressed “deep anguish and disappointment” and also indicated that these complications were the result of poor decision-making and mismanagement of the previous government.

TPA and the ‘power’ tussle

In the second week of September 2020, Damodar Valley Corporation, the power supplier, claimed that the state government’s electricity distribution company JBVNL owed them Rs 5608.32 crore for purchasing power between 31 March, 2015 to 23 August 2017, a legacy left behind by the previous BJP government im the state.

In response to the claim, the state energy department, under the leadership of secretary Avinash Kumar, called a meeting of all the stakeholders to reassess the value of debt that the Jharkhand government owes to the DVC. The meeting happened in March before the janta curfew and the first lockdown was imposed. After recalculation, the value of the debt came down to Rs 3919.04 crore. The state government also claimed that the DVC owed Rs 360 crore to Jharkhand as mining compensation from ‘Bermo mines’. The energy department was planning to propose adjusting the amount. The proposal was going to be placed before the Jharkhand Cabinet for their nod.

The Jharkhand Bijli Vitran Nigam limited (JBVNL) had agreed to pay the outstanding amount in 24 equal installments starting in March. But amid a pandemic and a subsequent lockdown, the priorities of the state government also changed.

On 11 September, 2020, the Union power ministry wrote to the Jharkhand government asking it to pay the outstanding dues of Rs 5 608.32 crore within 15 days from the date of issuance of the notice. Kumar issued a written assurance to the Centre on 25 September apprising them of the 14 March meeting between the representatives of the JBVNL and DVC where the debt was recalculated as Rs 3558.68 crore (includes the adjusting sum of 360 crore as coal compensation from Bermo mines which DVC owed to the state).

In their response, the government expressed their inability to pay off what they owe right away due to the financial crunch set off by pandemic. Despite the written assurance, the Centre ignored the new figure and pandemic, and invoked TPA. It went ahead, deducting the first of the four installments of Rs.1417.50 crore (of the unrevised sum) from the state government’s coffers. Other three were scheduled in January, April and July 2021. The Jharkhand government exited the TPA citing the agreement is not in favour of “Jharkhand’s health”.

Hemant Soren noted that “the TPA signed in 2017 laid the foundation stone towards destroying the basic edifice of cooperative federalism.”

The federal drama doesn’t take a pause here. A week after the Jharkhand government exited the TPA and a day after Kumar apprised the Union ministry and the RBI of their decision of exiting the Agreement through a letter, therefore requesting them that the second installment ought not be deducted, the Centre again deducted Rs 714 crore on 13 January, 2021.

It’s important to note here that the Centre mentioned in its September letter that the loans are being disembursed to the state power utilities under the ‘Atma Nirbhar Bharat package’. The Centre had announced ‘liquidity infusion’ of Rs 90,000 crore under which the state DISCOMs can avail loans through Public Sector Enterprises of Central’s Power Ministry to help the states pay their outstanding debts to CPSUs. The letter has advised the JBVNL to use this provision for paying its debt to DVC. JBVNL had also applied for a loan of Rs 1814 crore under this package, but it was rescheduled by the Cabinet.

However, the tussle over payment of dues is not a one-sided battle. During July and August 2020, the JMM had also raised issues of Centre’s uneven fiscal federalism and inadequate funding in the times of pandemic. The state also claimed that the Centre owed them approximately Rs 25,000 crore as GST compensation. The JMM secretary Supriyo Bhattacharya on 3 September said that the Centre owed the state Rs 1 lakh crore (Rs 65,000 crore as steel and coal compensation and Rs 35,000 crore as cess compensation). In October, when RBI auto debited the sum for Jharkhand’s consolidated account, Soren had said, “It is a deliberate attempt to push the state in a situation where it will have to raise money from the markets in times of economic instability.”

DVC and resentment of the tribals

The expansion of the Damodar post East India Company’s arrival caused 10 catastrophic floods in Bengal between 1730 and 1943. Considering the devastation, the government of West Bengal formed a Damodar flood enquiry committee in 1943 with Maharaja of Burdwan and renowned physicist Meghnad Saha as its members among others. But the panel had no member from The Chota Nagpur Plateau region. The committee suggested creation of larger dams and reservoirs at river sites. It also suggested creation of an authority similar to the Tennessee Valley Authority of the United States of America.

Mr WL Voorduin, the senior engineer of the TVA was appointed to study the Damodar problem and provide recommendations. In his report, he suggested creation of dams in the upper valley of the river, parts of Jharkhand, to control the flow and to produce electricity. According to his recommendations, four primary dams of DVC were constructed – Tilaiya dam, Maithon Dam, Panchet dam and Konar dam. All of them are in Jharkhand.

Memories of those floods in Bengal have faded, but the DVC could not use the dams to generate power. They instead resorted to producing electricity with coal resources of Jharkhand by constructing thermal power stations. Given the status of a public sector unit, the central government enabled provisions for continuous and uninterrupted supply of raw materials to them. DVC, as a power supplying entity failed in providing regular and uniform supply of power to people.

The indigenous and local populations, primarily, gave their land for the construction of dams and reservoirs of DVC. There were huge irregularities in the payments made against the these land and also in their rehabilitation. Indigenous populations protested but it was hardly noticed.

For the secondary stage, they gave land for the mining purpose and largely got involved in the mining activities, not in the decision making process. Here, too, the compensation issues were the same and additional issues of exploitative working conditions arose but were ignored and their demands, crushed. And for the tertiary stage, they provided their land for power plants on promises of job and land compensation, but here too, irregularities followed. In the name of job guarantee, they were given contractual labour and were expelled when the need of skilled labour arose.

The Indian government followed a model proposed by the East India Company and saw the area of Chota Nagpur as an area of dense forests and wild landscape and considered no harm in exploiting it in the name of ‘national interest’.

The habitants of these forests gave their blood, land and resources for the construction of these ‘temples of modern day India’ (as termed by Pandit Jawaharlal Nehru), to achieve a better future. The corporation and governments have failed to provide both. The corporation failed to achieve the purpose for which they were established.

Jharkhand is an economically important state and is not free from exploitation. Increasing number of coalfields and mining sites across the state are only the tip of the iceberg. Centre must recognise Jharkhand as a prominent state of India and should respect the terrain and its people. Activities which reduce social welfare policies and developmental funds can only incite resentment among the local populace. The fractured system needs a redesign.