LONDON—Persian Gulf waters off Iraq have become a new, important waypoint for Iranian oil smugglers looking to avoid U.S. sanctions, according to American officials, who expressed frustration that Baghdad and other allies aren’t acting more aggressively to enforce curbs on commerce with Tehran.

Iranian tankers now regularly transfer crude to other ships just miles offshore the major Iraqi port of Al Faw, according to the officials. The oil is then mixed with cargoes from other places to disguise its origin, and it eventually ends up on sale in world markets, they say.

In one example from March, according to a shipping manifest reviewed by The Wall Street Journal, 230,000 barrels of oil from the state-run National Iranian Oil Co. were transferred to a vessel moored in Iraqi waters. The cargo was blended with Iraqi oil and passed to other ships, according to people familiar with the operation. The ultimate destination of the oil wasn’t clear.

The people familiar with the transfer said the operation was part of an increasingly common and lucrative business that involves transferring and mixing cargoes with other vessels multiple times and then selling the oil with documents that declare it is as Iraqi. Iraqi oil can be sold at a significant premium to oil of Iranian origin.

The owner of the vessel couldn’t be reached for comment. It wasn’t clear who was chartering the vessel at the time.

U.S. officials said satellite imagery shows that such maneuvers are increasingly common and undercut the Trump administration’s policy of “maximum pressure.” The policy seeks to compel Iran to negotiate new limits on its nuclear ambitions and regional influence. 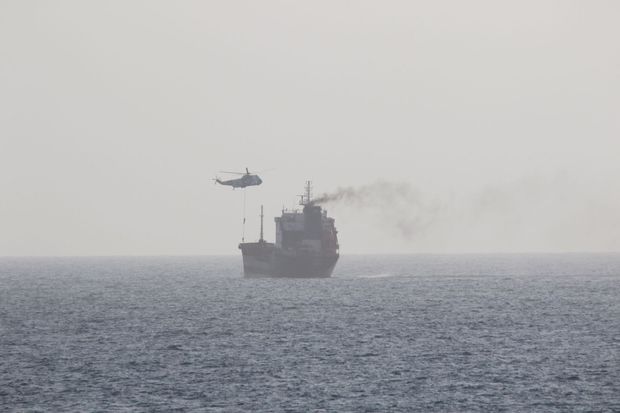 A merchant vessel in international waters en route to the United Arab Emirates port of Khor Fakkan, in the Gulf of Oman, on Aug. 12.


The Iraqi government has repeatedly expressed its support for U.S. sanctions. It declined to comment for this article.

Iraq’s new prime minister, Mustafa al-Kadhimi, met with President Trump in Washington in August, in a visit that was touted by both sides as a new chapter in a relationship that had soured under former Premier Adel Abdul-Mahdi.

Iran has increasingly tried to find ways to get its crude to market despite the U.S. sanctions. Iran’s daily crude and condensates exports averaged 827,000 barrels a day in the first six months of this year, according to U.S. shipping-information company TankerTrackers.com. That is up 28% from the previous six months, but far below the level of 2.7 million barrels a day in May 2018 before the sanctions.

“The amount of the exports of petroleum products in Iran have been unprecedented,” Iran’s oil minister, Bijan Namdar Zanganeh, said in August.

The U.S., meanwhile, has tried to close any gaps.

“We have been so successful at collapsing Iran’s oil sector because we enforce our sanctions,“ said Brian Hook, the former U.S. special representative for Iran. ”We have warned the maritime community for two years of the dangers of moving Iranian oil.”

While some of Iran’s oil exports go to countries not aligned with the U.S., such as Syria and China, they often pass through allies such as the United Arab Emirates or Iraq, where their origin is being concealed, according to U.S. officials.

Last year, the Trump administration called on the U.A.E. to crack down on illegal transit of Iranian oil through its waters.

In May, Washington said shipping companies should ensure customers and counterparties weren’t sending or receiving Iranian oil, and recommended additional checks to verify the origin of goods when ships have conducted transfers in high-risk areas such as the Persian Gulf.

A State Department official said “reports of actions that appear to constitute evasion of U.S. sanctions are troubling.” The official said the U.S. remains committed to its strategy of “maximum pressure” toward Iran.

—Courtney McBride in Washington contributed to this article.

Write to Sarah McFarlane at sarah.mcfarlane@wsj.com and Benoit Faucon at benoit.faucon@wsj.com

Appeared in the October 24, 2020, print edition as ‘Iraq Emerges as Hurdle to Enforcing Iran Oil Sanctions.’