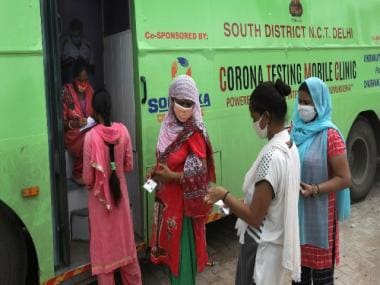 So far, a total of 46,74,987 people have recuperated from COVID-19 and the recovery rate stands at 81.55 percent, showed the health ministry’s data updated at 8 am.

Recoveries exceeded new infections for the sixth consecutive day, with a total of  87,374 people recuperating from the disease in a span of 24 hours, as per the health ministry.

So far, India has clocked 46,74,987 recoveries and the recovery rate stands at 81.55 percent, showed the health ministry’s data updated at 8 am.

Following the national trend, 13 states and UTs are also reporting a higher number of new recoveries than new cases, said the ministry.

It further said that nearly 74 percent of the new COVID-19 recoveries are from 10 states and Union Territories: Maharashtra, Karnataka, Andhra Pradesh, UP, Tamil Nadu, Odisha, Delhi, Kerala, West Bengal and Chhattisgarh. Maharashtra has maintained this lead with 19,476 recoveries (22.3 percent) for the sixth consecutive day.

With the increasing number of recoveries, India now has 9,66,382  active cases, which accounts for 16.86 percent of the total cases detected in the country, showed the ministry’s data.

According to the Indian Council for Medical Research (ICMR),a cumulative total of 6,74,36,031 samples have been tested up to 23 September, of which 11,56,569 samples were tested on Wednesday.

‘Cases in Delhi expected to dip’

Delhi chief minister Arvind Kejriwal said the second wave of coronavirus infections has hit its peak in the National Capital and experts had hinted that the cases were likely to decline in the next few days.

Delhi has been witnessing a surge in the number of coronavirus cases in the last few days and has so far recorded over 2.60 lakh cases and 5,123 deaths.

The chief minister said the state government was “keeping its fingers crossed” and hoping that the COVID-19 cases will “gradually” come down due to the steps taken by it.

In Uttar Pradesh, Chief Minister Yogi Adityanath asked senior officials to focus on districts that have reported 100 or more cases per day in the past one week in order to arrest the spread of the infection. Aditynath instructed that nodal officers and a special secretary-level officer be deputed in each such district.

The chief minister asked officials to ramp up contact-tracing, adding that special attention should be given on testing the high-risk groups.

He also directed them to keep ventilators/HFNC (high-flow nasal cannula, a non-invasive respiratory support system for oxygen supply) active in all districts, it added.

The Telangana government decided to resume bus services in Hyderabad from 25 September. Inter-state bus services from Telangana to Karnataka and Maharashtra will also resume from Friday, an official release said on Thursday.

The city bus services have been under suspension since March as part of the lockdown announced to contain coronavirus.

In Assam, former chief minister Tarun Gogoi was shifted to the ICU as his oxygen levels fell due to post-COVID complications. The 85-year-old leader had tested positive for the virus on 25 August and was admitted to the Gauhati Medical College and Hospital (GMCH) the next day.

He tested negative recently but remained in the hospital.

Gogoi, who has “a lot of comorbid conditions”, was admitted to the ICU as he developed some problems in the lungs and his oxygen level
dropped drastically informed GMCH superintendent Abhijit Sarma.

The hospital official added that the leader’s condition had stabilised. “However, he is stable now and we are constantly monitoring his condition. He is in oxygen support at this moment,” he said.

Sisodia had tested positive on 14 Septemeber and was initially under home isolation.

Shinde had attended the state cabinet meeting earlier this week and is the 13th minister in the state to have tested positive.

“I got myself tested for  COVID-19 yesterday and the reports have returned positive. Health is fine thanks to the blessings of you all. Requesting all who came in my contact over the past some days to take proper care and get themselves tested,” the minister tweeted in Marathi.

“His condition in the last 24 hours has deteriorated further warranting maximal life support and he is extremely critical,” assistant director (Medical Services), MGM Healthcare, Dr Anuradha Baskaran said in a statement, adding that a team of doctors was monitoring his condition.

The health condition of the singer, who was admitted to the hospital with mild symptoms on 5 August, deteriorated for the first time on the night of 13 August. He was put on life support and moved to the Intensive Care Unit.

On the vaccine front, scientists in the UK said they are heading towards an approach being referred to as challenge trials, which involves healthy volunteers being deliberately infected with the novel coronavirus to test the efficacy of vaccines.

Participants will be injected with an unnamed experimental vaccine and around a month later exposed to Sars-Cov-2, the virus that causes COVID-19, the report stated.

Around 2,000 potential volunteers have signed up for challenge studies in the UK through the US-based group 1Day Sooner, and are expected to be paid a few thousand pounds for participating in the upcoming trials, according to the newspaper.

The project’s academic leader is Imperial College London, and it will be run by hVivo, a spinout from Queen Mary University of London that was bought earlier this year by Open Orphan, an Ireland-based pharmaceutical research organisation.

Oxford University is also believed to be considering a similar “challenge trial” to test whether people have protective immunity from COVID-19 if they have been previously infected.

Any trial that involves exposing people to the virus would need the approval of the UK Medicines and Healthcare products Regulatory Agency (MHRA), as well as an independent research committee.

The virus has infected 3,19,44,038 persons across the world and claimed 9,77,881 lives, according to the John Kopkins University’s coronavirus tracker. US has reported the highest number of deaths, followed by Brazil and India. In terms of cases, US again tops the list followed by India and Brazil.