NEW DELHI—Most Covid-19 restrictions have been lifted as cases have plunged, but Indians are still stashing away their rupees and building bank balances.

New Delhi maid Sarita Ekka has the beginnings of an impressive trousseau stacked in a corner of her humble home: a new juicer, sandwich grill, pots, utensils, 15 saris and a full set of gold jewelry.

Last year she stopped shopping and put off wedding plans to build her safety net as Covid-19 constricted opportunities and income.

“Marriage can wait. I’m saving for Covid emergencies,” she said. “What if I lose my job? What if I have a medical emergency? Life is more important than these things.”

Consumers like Ms. Ekka are the main engine of growth in the world’s fifth-largest economy. Their willingness to spend will set the course of the recovery.

“There’s this huge mountain of money out there which people have been able to save” and could power growth, said

Few countries have been harder hit by the pandemic. India has tallied more than 10 million confirmed coronavirus cases, second only to the U.S. The country once had the world’s fastest-growing economy, but India’s gross domestic product contracted more than 15% in the six months through September, making it one of the worst-performing major economies for that period.

Developed countries also saw personal savings rates climb early in 2020, but they quickly came down once restrictions were eased. The U.S. savings rate, for example, which has generally been around 7% for years, shot up to more than 30% in April. While it is still above normal rates, it has come down to less than 15% in recent months, illustrating that much of that savings was forced on consumers who couldn’t spend as much as usual when they were ordered to stay home early in the outbreak.

There are indications the savings rate in India remains stubbornly high, even as infections have dropped from almost 100,000 a day to fewer than 20,000. The amount of currency with the public in December was still up 23% from a year earlier, the Indian Banks’ Association said.

Mobility data from Google shows people are still holding back on shopping. Activity around retail and recreational locations in India this week remained around 27% below the level seen before the coronavirus started to spread. That is on par with some countries that are struggling with surges, including the U.S., which is down 26%, according to the Google Mobility Report. 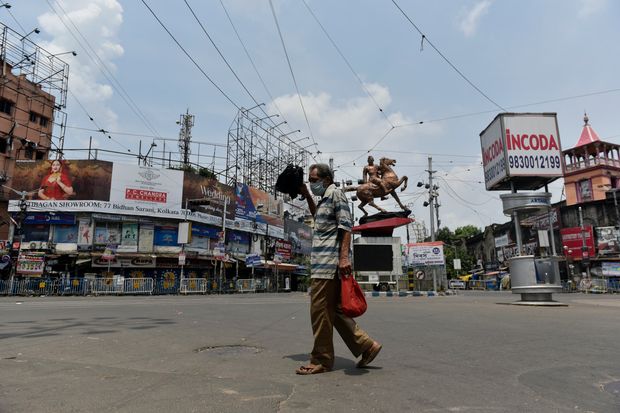 A locked-down Kolkata in the summer.


If the savings are mostly forced—meaning from people who can’t spend it as freely as they would like—then the pent-up demand could lead to a spending spree once unleashed. If most of the savings are out of fear about jobs and health, it could become a longer-term drag on the economy.

It is still uncertain what the net effect of these two types of savings will be in India, but the report from the Reserve Bank of India in November suggested the central bank would be watching to see whether India’s savings surge could last longer because it reflects deeper fears about the threat the pandemic poses to future income.

The affluent, whose incomes have been largely insulated from the worst of the pandemic, are a tiny minority of the populace, but they make up a lion’s share of the consumption and saving.

Their spending on goods has largely returned to normal, HSBC’s Ms. Bhandari said, but they are holding back spending on travel and eating out.

The poor, who make up a majority of the populace, have been harder hit and are more likely to be saving out of fear and less likely to start spending much soon. They have seen higher unemployment, lower income and lower revenue in their tiny businesses.

“The 85% of the labor force who work in the small and informal sector, they probably have seen a cut in their wages and salaries,”  Ms. Bhandari said. “There’s an element of fearful savings there and insecurity about their jobs.” 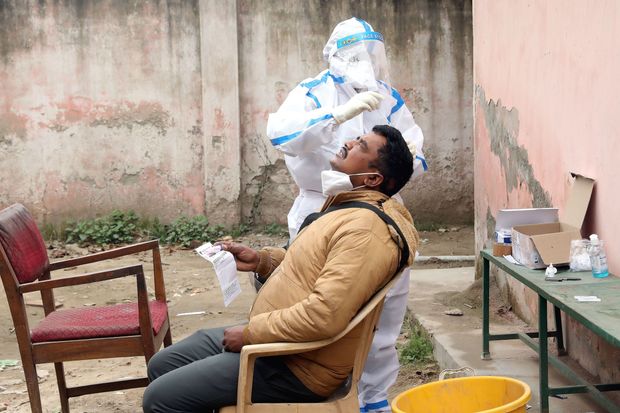 There are indications many Indians are still struggling. Motorcycle and scooter sales—considered a good gauge of middle class demand—plunged more than 70% in the months around India’s nationwide lockdown in April and May. They rebounded on some pent-up demand in October but have since cooled to around the same level they were a year ago.

The number of villagers who have applied for government work through India’s national rural employment program remains more than 60% higher than it was a year ago. Hundreds of millions of people in rural India are saying they need the extra money, a problem that has been exacerbated as millions of migrant workers from the cities have returned home without work.

What do you think the Indian economy will look like, post-pandemic? Join the conversation below.

Until the global vaccination drive spreads to the backwaters of India, returning to normal will be difficult.

Chanda Goel from Dehradun city in the northern state of Uttarakhand said she has cut back on her food budget to save more money for these uncertain times. She has been hoarding cash and now has more than $1,000 around the house to be ready for whatever comes next.

She said she isn’t going to stop saving until the pandemic recedes.

“The vaccine has come out now. But we will wait for a while to make sure it’s safe to move around freely and fearlessly,” she said. “That’s when we can start spending again.”

—Vibhuti Agarwal contributed to this article.

India is reporting more daily coronavirus infections and deaths than any other country, while its economy has contracted at a record pace. WSJ explains what’s at stake for the nation of nearly 1.4 billion. Photo: Naveen Sharma/SOPA Images/Zuma Press (Originally Published Sept. 10, 2020)

Write to Eric Bellman at eric.bellman@wsj.com

Maharashtra among six states to account for 85.51% of daily new COVID-19 cases