In the 86th episode of ‘Mann Ki Baat’, Prime Minister Narendra Modi praised the efforts of the administration of Jammu and Kashmir led by Lieutenant Governor Manoj Sinha and the civil society of Kashmir for the restoration of Khushal Sar. The lake is situated in the heart of downtown Srinagar which, at its best, extends from Zoonimar to Aali Kadal.

The Jammu and Kashmir administration took up the restoration of Khushal Sar last year under ‘Mission Jal Thal’. The administration picked a double-edged sword to weed out the issues that had brought the lake to the brink of death. While technology was used to check encroachments and landfill sites choking the lake, residents living along its banks were appointed as water ambassadors or guardians of the lake.

“Friends, once people take up a responsibility collectively, they do wonderful things. We have seen many big changes taking place in which public participation and collective efforts played a significant role,” PM Modi said, referring to the ‘Mission Jal Thal’.

“This is an extraordinary effort to clean the lakes and ponds of Srinagar and restore their old glory. ‘Mission Jal Thal’ focuses on ‘Khushal Sar’ and ‘Gil Sar’. With public participation and a lot of help from technology, encroachment and illegal construction are being identified, and a formal survey is being carried out (to restore the lakes to their original size),” Prime Minister Modi said in his monthly radio broadcast.

Khushal Sar was once a thriving ecosystem connecting Nigeen Lake via Nallah Amir Khan, Anchar Lake and Gil Sar. The narrow strait connecting Khushal Sar with Gil Sar (which merges with Nigeen Lake) is spanned by a bridge called Gil Kadal. According to reports, Mar Canal or Nallamar, which provided water navigation till Ganderbal via Anchar Lake, drained into Khushal Sar. Khushal Sar and Gil Sar were the primary sources of water for the inhabitants living around these water bodies. However, the people were using tap water supply for drinking purposes, but the rest of the daily uses included washing clothes, bathing and washing utensils etc. “The water in Gil Sar and Khushal was so clean that people in these areas were going for the ablution of prayers to these places,” said a noted writer and historian Zareef Ahmad Zareef and added, “The entire Srinagar City had been facilitated with tap water supply for drinking purpose in 1892 by Maharaja Pratap Singh, but people used the water from these water bodies for their daily purposes.”

Like other natural water bodies in Kashmir, the Gil Sar and Khushal Sar had great importance in Srinagar City. The locals living nearby Gil Sar and Khushal Sar termed the deterioration of the water bodies as the ignorance of concerned authorities. “I remember the days when I used to swim in the crystal clear water of Gil Sar,” said Abdul Majeed Bhat, 55, of Zunimar. He said that the growing population and uncontrolled construction resulted in the deterioration of water bodies in Srinagar.

“The people directly drained their sewage and other waste products in Gil Sar, Khushal Sar and other such water bodies and made the water totally useless for daily purposes,” said Majeed.

However, call it the negligence of successive governments in Jammu and Kashmir, their apathy or perhaps their wilful complicity to feed the land sharks, the Mar Canal was filled, which started the process of deterioration of Khushal Sar and Gil Sar lakes, depriving the city of one of its most precious water bodies which added to its aura and heritage.

“The deterioration of Khushal Sar also affected the livelihood of people who lived along their banks. We involved locals in the restoration efforts because they have a direct stake in the preservation of Khushal Sar. The government officials can’t keep watch 24/4, but locals can,” said Manzoor Ahmad Wangnoo, president of Nigeen Lake Conservation Organisation (NLCO), a nonprofit.

In December 2020, Wangnoo, who played a crucial role in bringing locals and government departments together, was struck by the idea of cleaning up Khushal Sar, which had become a source of perpetual stink in the areas around the lake. It was during a byte recorded by the state-broadcaster Doordarshan that the ‘Ehsaas’ of restoring the water body lit up in him.

As the spring arrived in 2021, truckloads of animal carcasses, polythene bags, cement sacks, plastic items, and other garbage were making their way out of the lake. Once the cleaning was done, Wangnoo knocked the doors of the Srinagar administration along with his local volunteers. They asked for mechanical and other help in dredging Khushal Sar, whose waters were stagnant due to a heavy accumulation of muck at the river bed.

Divisional Commissioner Kashmir PK Pole, who has personally inspected the restoration work a number of times, as well as the Srinagar administration led by Deputy Commissioner Aijaz Asad were keen on the project. Wangnoo hired a water master, which floats on the water surface to remove the muck on the river bed from the open market. At the same time, the Srinagar Municipal Corporation provided manpower and trucks for driving away the garbage.

Moved by the work done by locals with the help of Wangnoo’s NLCO, the Jammu and Kashmir administration extended the restoration project to include Gil Sar as well. The objective is to reverse the degradation of two of the most important water bodies of Srinagar. The project envisages retrieving all the 22 live springs inside Khushal Sar and Gil Sar lakes.

Although the twin lakes have undergone remarkable changes in just one year, the government needs to devise plans to prevent the flow of garbage and other pollutants into them again. Locals claim that Nallah Amir Khan and Gil Sar are the biggest contributors of pollutants to the lake, which needs to be stopped. Besides, there is a need for adequate waterways to improve the water quality of Khushal Sar. According to officials, more than 60 kanals of the lake have been restored, and its effects have started to become visible. After a gap of more than 30 years, migratory birds returned to the lakes this year. The government is also in the process of starting lotus stem cultivation in the lake in the coming days.

”Once the restoration work is completed, the Tourism Department has developed a viewpoint at Gilkadal to attract tourists and to make the place a tourist hub. The ultimate vision is to revive the Ancient Water Circuit in Kashmir from Dal to Wular Lake with the objective of converting it into a National Waterway,” said LG Sinha.

The history of humankind is linked to the history of water bodies. Ancient civilisations are known to have settled along the banks of rivers because they not only provided them with water for drinking and other purposes but also sustained their way of life.

“Protection of these environmental resources in Jammu and Kashmir UT is integral to our development programmes. The major challenge is the devastation wrought by the encroachment on several lakes and rivers. I urge everyone to preserve the life-sustaining systems. For the sake of future generations, we have to strengthen the ecological integrity,” said the Lt Governor. 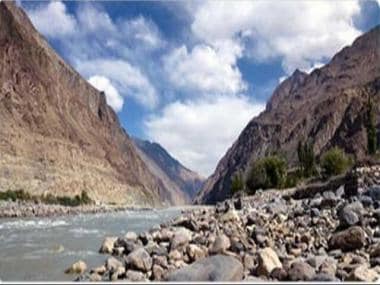