Although the state government has issued directives against the setting up refugee camps, local communities are clandestinely providing shelter to refugees 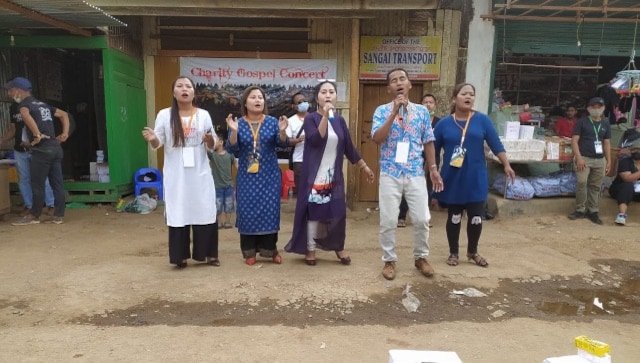 Artists in Manipur have been organising performances to raise funds for the welfare of refugees from Myanmar. Sunzu Bachaspatimayum

Manipur is currently in the midst of a humanitarian crisis, with many refugees from Myanmar illegally crossing the border with India to reach the town of Moreh.

Although the state government has issued directives against the setting up refugee camps, local communities in Moreh are clandestinely providing shelter to refugees. However, the provision of food and basic amenities remains a major worry.

Speaking to this reporter, Manipur chief minister N Biren Singh said, “The Union home ministry has said that humanitarian help has to be extended, and we are doing so. But we are awaiting advice from the ministry on the future course of action.”

Singh, however, did not provide a specific figure for the number of Myanmar nationals who have entered Manipur after the military coup in the country.

Ngamkholal Haokip, Secretary in-charge of Relief of the Kuki Students’ Organization (KSO, GHQ), noted that many refugees are relatives of locals in Moreh. Haokip said that a system to handle the humanitarian crisis is the need of the hour.

“It is an open secret that an influx is taking place. The government of Manipur is refusing to facilitate refugees from Myanmar, and is also preventing local groups and civil societies from setting up shelter camps. Thus, refugees are being sheltered in people’s homes, community halls and village offices in Moreh,” he said.

Haokip said that he understands the helplessness of the government of Manipur, given the Centre’s stand on the issue. He, however, said that he appreciates the state government’s decision to facilitate the treatment of refugees who were injured in the military crackdown in Myanmar’s Tamu. A refugee from Myanmar receiving treatment in Manipur. Sunzu Bachaspatimayum

Among those who received medical treatment in Imphal were Naing Naing Thu, Naing Naing Oo and Phuzo. They underwent surgeries in the abdomen, chest and buttocks respectively. After their release from hospital, they were dropped off at Moreh.

According to another social activist, who did not wish to be named, there are over a thousand refugees from Myanmar in Moreh as of now, many of them women and children. The activist, who runs an NGO, said that many locals are coming forward with generous donations in cash and kind. Further, local artists are performing at road shows to raise money for food and other basic needs, she noted.

Asked about whether her NGO has provided assistance to the refugees, she said, “It is complicated to intervene as an NGO in this matter. Given the Central government’s stand on the issue and its policy on NGOs, even if we want to, we cannot help officially. Individually, we are lending our helping hands and even donating for their cause.”

On 1 February, Myanmar’s military overthrew Aung San Suu Kyi’s government less than three months after she won a landslide victory in a general election. Till 11 April, 706 protesters and bystanders have been verified as killed in the post-coup crackdown, The Associated Press has quoted the Assistance Association for Political Prisoners as saying.

The government of Mizoram has officially acknowledged that more than a thousand people from Myanmar, mostly from the Saigang and Kachin states, have entered Mizoram after the coup. However, official data on the number of refugees in Manipur has not yet made public.

Speaking to this reporter, an activist of the All Burma Students’ Democratic Front said, “India is the biggest democratic state in the world, and we look up to it as we aspire for democracy in Myanmar. India has always been our hope in our fight against the military for the cause of democracy. It had supported our leaders and our movement in the past. But this time, India has disappointed us.”