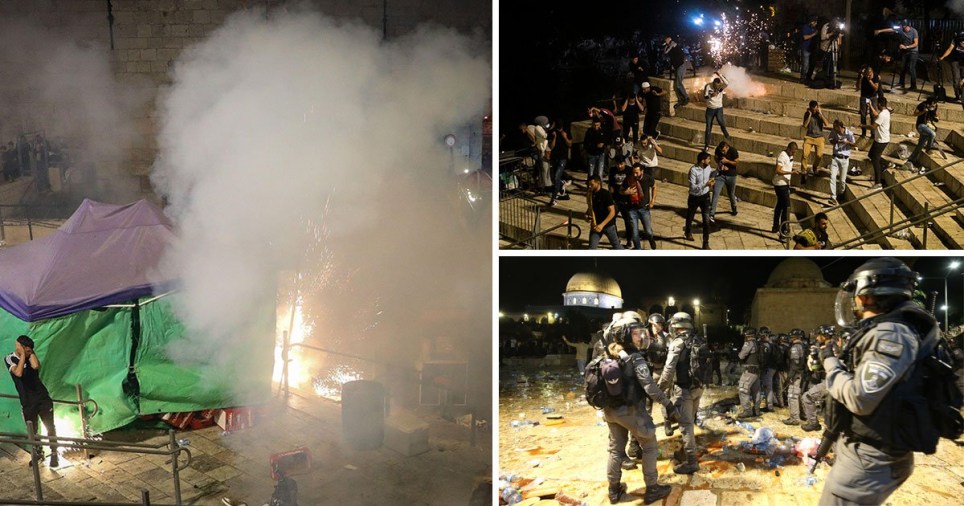 At least 350 people are known to have been hurt in consecutive days of violence in Jerusalem (Picture: Alamy Live/Getty Images)

Hundreds of Palestinians have been injured in a weekend of clashes with Israeli security forces in Jerusalem.

The violent clashes around the Al-Aqsa mosque compound in the Old City have prompted an international outcry and are fuelled by a long-standing bid by Jewish settlers to take over nearby Palestinian homes in Israeli-annexed east Jerusalem.

At least 121 Palestinians were wounded in Saturday’s overnight clashes, many hit by rubber bullets and stun grenades, according to the Palestinian Red Crescent. Israeli police added that 17 of its officers were injured.

That came after more than 220 people – mostly Palestinians – were hurt as police stormed Al-Aqsa, saying Palestinians had thrown rocks and fireworks at officers.

‘This is shameful and should prompt worldwide outrage.’

This is shameful and should prompt worldwide outrage. pic.twitter.com/0PJhnqw4tT

Amid growing international calls for calm, Tunisia said the UN Security Council would hold a closed-door meeting Monday to discuss the violence.

Four Arab countries that have normalised their ties with Israel in the past year – the United Arab Emirates, Bahrain, Morocco and Sudan – all condemned Israel’s actions and voiced support for the Palestinians.

But police set up roadblocks the previous night, saying they wanted to limit access to the Old City and avoid ‘violent riots’ – effectively preventing hundreds from praying. 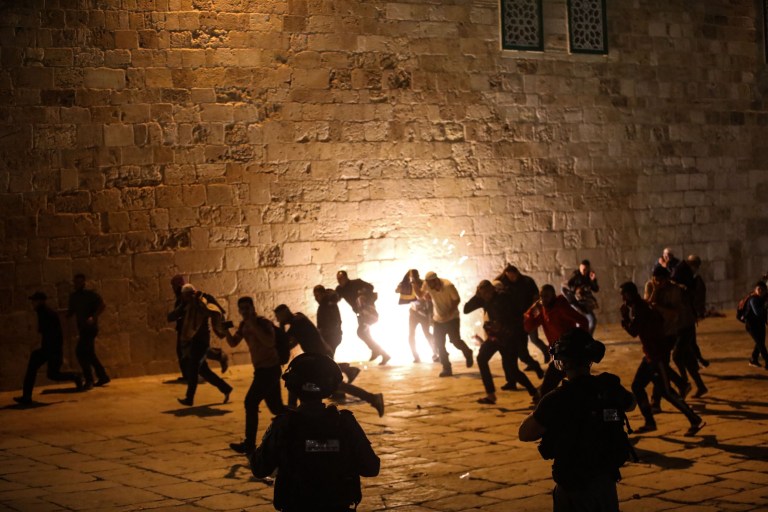 Stun grenades and plastic bullets were fired near the Al-Aqsa Mosque on Friday (Picture: Anadolu) 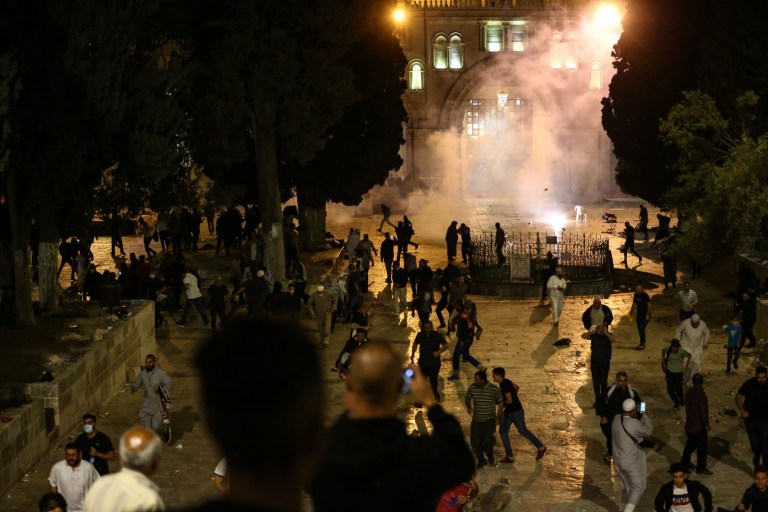 Many of the injured were taken to hospital following the clashes (Picture: Anadolu) 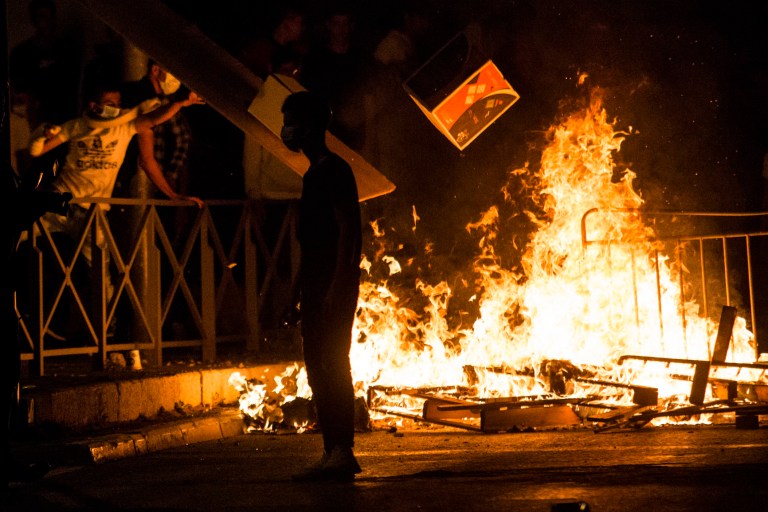 Police stopped at least one bus heading to east Jerusalem and arrested some Palestinians, while hundreds of others marched on highways to the Holy City.

Mr Netanyahu said on Sunday that Israel would maintain ‘freedom of worship for all religions’.

Saturday marked Laylat al-Qadr (the Night of Destiny), a key moment in the Muslim calendar believed to be the night when the Koran holy book was revealed to the Prophet Mohammed.

Worshippers prayed peacefully at Al-Aqsa, but violence flared elsewhere in east Jerusalem, in the West Bank and on the Gaza-Israel border.

Mounted police were deployed outside Damascus Gate, a key access point to the Old City, as officials fired stun grenades to disperse protesters. 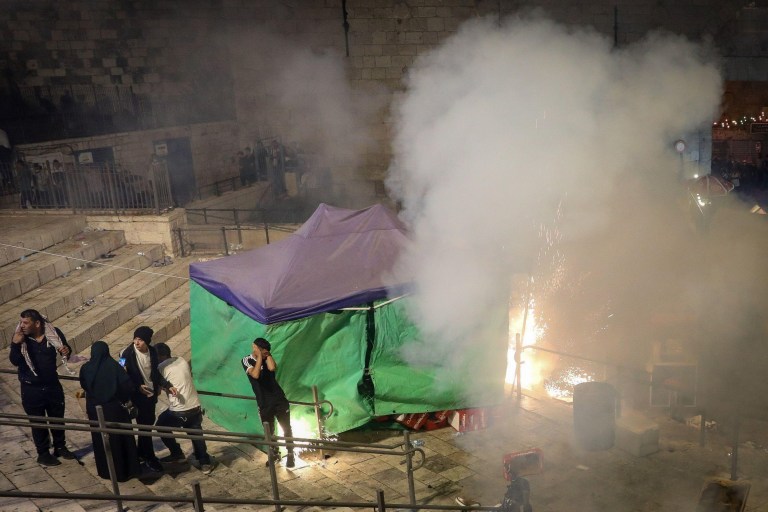 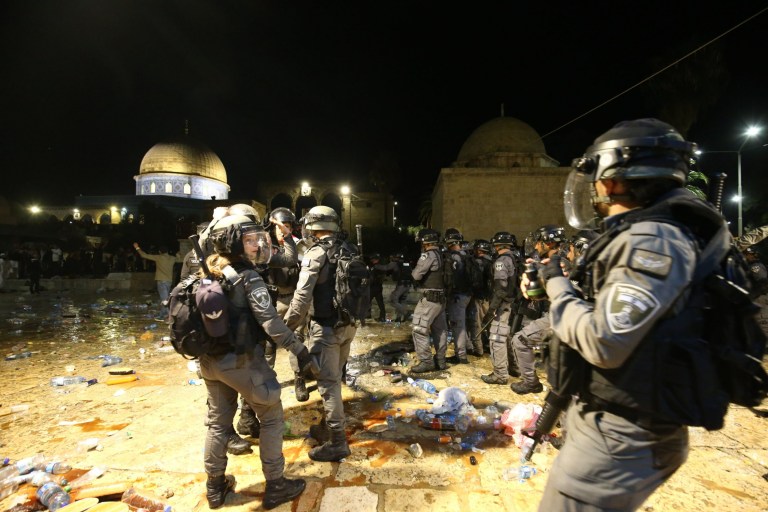 Israeli police were criticised for their actions (Picture: Getty Images) 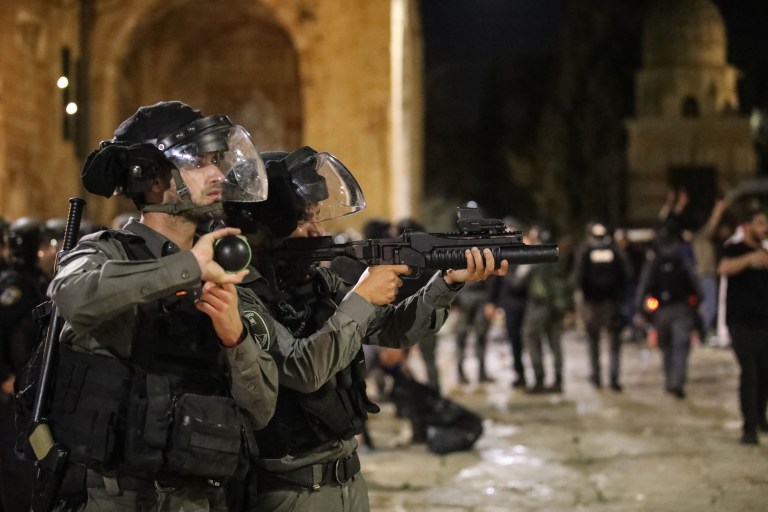 The incidents took place during Ramadan and near one of the holiest mosques in Jerusalem (Picture: Getty Images)

Palestinians pelted riot police with stones and set fire to a makeshift barricade, and reporters saw a woman with a bloodied face being escorted away from the scene by a rescuer.

Police said they detained nine people for ‘disrupting public order’ and warned that ‘all means will be used to maintain calm’.

Police also dispersed a rally in Sheikh Jarrah district, where Palestinian families facing eviction from their homes in a dispute with Jewish settlers had been expecting a Supreme Court decision on Monday.

But the justice ministry said on Sunday that in light of ‘all the circumstances’, it would delay the court hearing.

Elsewhere, Police fired stun grenades and water cannon at protesters who pelted them with stones, while a group of Palestinians clapped and sang resistance songs.

A reporter for Israeli public television tweeted footage of a Jewish driver whose car was attacked with stones and windows shattered at the entrance to Sheikh Jarrah.

Demonstrator Adnan, 20, said: ‘We are here, in the street, to say that we are not going to leave.

‘For years, settlers have attacked us and taken our land, but silence is no longer an option.’

The violence has sparked international calls for calm, including from Pope Francis, who said: ‘Violence only generates violence. Let’s stop these clashes.’