Volodymyr Zelenskyy evokes popular empathy for the Ukrainian people, enables foreign governments to assess their people’s interest in supporting Ukraine, and highlights the importance of territorial sovereignty to world peace

Since Russia’s war against his country, has directly addressed the elected representatives of multiple countries in his quest for international support. These speeches have made explicit references to parallels between his country’s current plight and the particular historical experiences of these nations.

This strategy is one of many that Zelenskyy has employed to successfully build international support for Ukraine.

As scholars of post-Soviet politics and the use of historical memory, we think Zelenskyy’s addresses help garner global support in three key ways: He evokes popular empathy for the Ukrainian people, enables foreign governments to assess their people’s interest in supporting Ukraine, and highlights the importance of territorial sovereignty to world peace.

Each of Zelenskyy’s speeches included historical references deliberately tailored to resonate with the people of the nation he was addressing at the time.

In his speech to the German Bundestag, for instance, he referred to the German people as standing behind a wall “between freedom and slavery.” That powerfully evoked the Berlin Wall’s division of post-World War II Germany into two countries, one aligned with the democratic West, and the other with the communist East. Ukrainian President Volodymyr Zelenskyy delivers a video message to the people joining a rally on the Remember square in Frankfurt, Germany. AP

He also reached farther back, referring to the “historical responsibility” of the German people, and making repeated references to the suffering endured by millions of Europeans during World War II because of the Nazi regime’s aggressive territorial expansion and genocidal atrocities. These references might have been particularly potent given Zelenskyy’s own Jewish heritage.

When speaking to the Israeli Knesset, Zelenskyy compared the current suffering and forced migration of his people to the experiences of the European Jewish community in the 1930s and 1940s, including fleeing the Holocaust. Specifically he said the Ukrainian “people are now scattered around the world. They are looking for security. They are looking for a way to stay in peace. As you once searched.”

While addressing the US Congress, Zelenskyy referred to the horrors of unprovoked aggression from hostile foreign forces at Pearl Harbor and on 9/11. He highlighted how these sudden and unanticipated attacks wreaked havoc on the lives of “innocent people.”

Finally, speaking to the British Parliament, he quoted one of Winston Churchill’s most memorable speeches, delivered at a time when Britain was threatened by, and successfully resisted, an expansionist power – Nazi Germany.

These historical parallels were intended to appeal to his audiences’ emotions, with the intent of inspiring popular empathy abroad. While politicians have long evoked history in their rhetoric, Zelenskyy’s use of history is distinct given its variety and intended audience. His goal was not to rally his own people, but to build an international coalition of support.

His historical references tapped into different sentiments in different countries – trauma in the United States and Israel, shame and guilt in Germany, pride in the United Kingdom. But the underlying goal in each instance was to compel the people of these countries to recall their own pasts so that they could sympathize with the pain and suffering of the Ukrainian people today. In addition, his appeals prompted broader conversations in the media and among the public, revealing popular sentiment toward the conflict and allowing leaders to gauge reactions to the possibility of their country’s increased involvement. Where people were more receptive to Zelenskyy’s historical parallels, leaders could feel more confident that their policies supporting Ukraine would receive broad popular support.

The appeal of his message in Germany seemed clear when the Bundestag’s immediate transition to other matters of state following Zelenskyy’s speech drew public outrage. Since then, Germany has continued to increase its assistance.

Zelenskyy’s address to the US Congress evoked concern and empathy for the Ukrainian people among both elected representatives and the public. Within hours of this speech, President Joe Biden announced an additional $800 million package of military support for Ukraine. 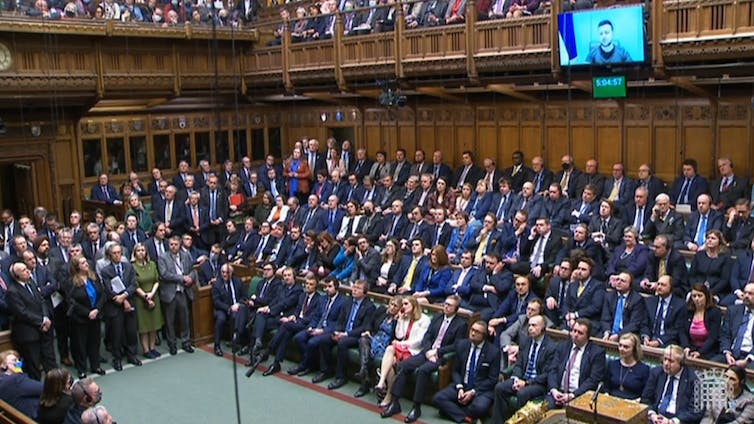 In contrast, Zelenskyy’s attempts to draw connections between the current situation in Ukraine and the Holocaust drew criticism from across the political spectrum in Israel. Israel’s support for Ukraine has been relatively muted and cautious.

The poor reception of this historical analogy played into Israel’s reluctance to support Ukraine.

Perhaps Zelenskyy’s best rhetorical tactic was his appeal to the liberal ideals of the post-World War II order. By threatening Ukraine’s territorial sovereignty, Russia has also threatened a foundational principle of the largely peaceful era since 1945 – a country’s sovereignty.

He used this shared value in different ways. For example, he reminded Americans when their territorial security was compromised and the British when theirs was preserved through resistance. But the goal was the same – to unite and mobilize international support behind his nation in an otherwise fractured global environment.