Cyrene lies between the Egyptian border and Benghazi, one of the key cities that rose up against longtime dictator Moamer Kadhafi in 2011. The country has since fallen into anarchy and violence which sparked fears for its rich ancient heritage. 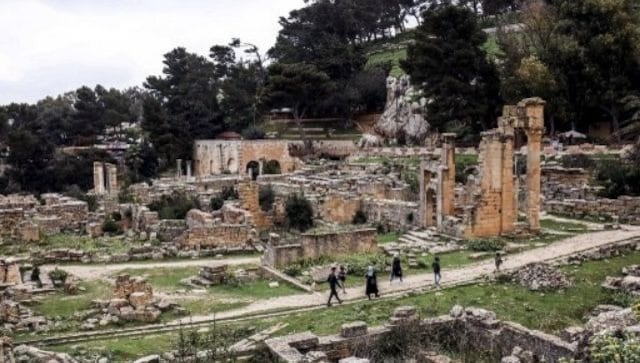 People walk through the remains of the Sanctuary of Apollo in the ruins of Libya’s eastern ancient city of Cyrene. Abdullah Doma/AFP

The spectacular ruins of the ancient Greek city of Cyrene survived Libya’s 2011 revolution and an ensuing decade of lawlessness, but today they face new threats: plunder and bulldozers.

Under balmy spring sunshine, a handful of tourists take advantage of the North African country’s months-old ceasefire to wander around the temple of Zeus, perched atop a wind-battered hill near the eastern end of Libya’s Mediterranean coast.

There are no queues here.

The scarce visitors — all Libyans — amble through the sanctuary of Apollo and the amphitheatre, before visiting a museum housing faceless busts of Greek divinities and naked statues in marble.

Founded in the seventh century BC, Cyrene “was one of the principal cities in the Hellenic world”, according to the UN’s cultural agency UNESCO, which added the site to its World Heritage List in 1992.

“A thousand years of history is written into its ruins,” it said. Yet, beyond the fence marking out the protected part of Cyrene, residents of modern-day Shahat are taking possession of lands held in trust by the state, then selling them on to property developers.

Other areas are being dug up by treasure-seekers hoping to smuggle looted artefacts to sell abroad.

“Some people are coming in and bulldozing areas containing artefacts, dividing them and selling them, then building housing blocks on top of these priceless sites,” said Adel Abu Fejra, of the Cyrene department of antiquities.

‘This is our land’

Abu Fejra said his department “can’t even measure” how much has been lost, as the plots “are outside the fenced area under our protection”.

Cyrene lies between the Egyptian border and Benghazi, one of the key cities that rose up against longtime dictator Moamer Kadhafi in 2011. The country has since fallen into anarchy and violence which sparked fears for its rich ancient heritage.

UNESCO in 2016 added Cyrene and four other sites in Libya to its List of World Heritage in Danger. The war saw the country splinter into fiefdoms under the control of a kaleidoscope of militias — including the Islamic State group which at one point held a stronghold in Derna, just 70 kilometres further east. A view of the ruins at the Temple of Demeter in Libya’s eastern ancient city of Cyrene. Abdullah Doma/AFP

Today, despite the signing of a peace deal between Libya’s main factions and the creation of a unity government this month, many residents have more immediate concerns than protecting ancient heritage.

“They want us to stop using our land around the ruins, saying there are still artefacts underneath them — but this is our land, and we have the right to exploit it,” said Saad Mahmoud, who owns farmland nearby.

“It’s up to the state to find solutions and pay landowners compensation that fits with the rising prices of real estate, which have made it hard for us to find alternatives.”

Like Mahmoud, many of Shahat’s 50,000 residents see the pressing need for housing as a higher priority than preserving old ruins.

A town plan last updated in 1986 has been largely ignored.

Ismail Dakhil, an official at the museums department of eastern Libya, says as much as 30 percent of the ancient city may have been built on. And that is not the only problem.

“There has been graffiti on the ancient ruins, and lots of informal digs, where antiquities are dug up and smuggled out of the country,” he said.

Libya does have laws aimed at protecting its ancient heritage, overseeing archaeological digs and sanctioning violators. But Dakhil says they have little effect, with “derisory fines and prison sentences” of up to a maximum of a year.

Some are now hoping that after a decade of violence the new government will also improve protection of precious historical sites.

“The policies on protecting heritage must be reviewed,” says researcher and historian Ahmad Faraj. “I hope this government will come up with a new vision.”