In 2017, Qatar was blockaded by Bahrain, Egypt, Saudi Arabia, and the United Arab Emirates over alleged support of Islamists and Iran. They also sought to pressure Qatar into capitulating to the Anti-Terror Quartet (ATQ) demands

Qatar is among the Gulf and Islamic countries that has censured India over suspended BJP spokesperson Nupur Sharma’s derogatory remarks against Prophet Muhammad, but it has forgot that it was India that bailed out the emirate when its Islamic Arab brothers had blockaded it in 2017.

The acute food crisis in Qatar was solved by India with the institution of a new sea supply line called India Qatar Express Service. Back then, the entire Arab world had censured Qatar for “supporting” terrorists.

On 5 June, 2017, Bahrain, Egypt, Saudi Arabia, and the United Arab Emirates (UAE) cut off official diplomatic and economic ties with Qatar over alleged support of Islamists and Iran. They also sought to pressure Qatar into capitulating to the Anti-Terror Quartet (ATQ) demands.

Qatar has been supporting Islamist groups and the nation also acknowledges that it has provided assistant to some “Muslim Brotherhood”, but it denies aiding terror outfits al-Qaeda, Islamic State (IS).

It is worth mentioning that Qatar is largely dependent on imports by land and sea for its essentials items to cater to the demand of its 2.7 million population. In 2017, the land and the sea borders with Qatar were closed by the neighbouring nations.

Before the Saudi-Qatari border was closed on 5 June, 2017, Arabian emirate imported roughly 90 per cent of its food through the Abu Samra crossing. After the ties got severed, Qatar was forced to restructure its food import routes to meet its soaring demand.

Many countries including Turkey, Iran, and Oman played a significant role in helping Doha meet food security requirements, India went beyond for Qataris and restructured import lines to circumvent the quartet’s blockade.

At the time of crisis in Qatar, India came to its rescue by establishing a close partnership, helping Doha deal with the issue of food security. India for long has been aiding the Gulf country in terms of increasing its growth of livestock and crops.

Also, in the recent years, India and Qatar have established joint business and investment ventures with the main focus on enhancing Qatar’s agricultural resources. 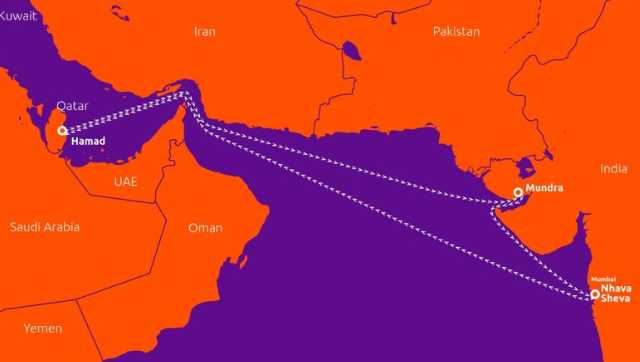 When the neighbouring countries boycotted Qatar in 2017, India started a new direct maritime line to Qatar to ensure that the supplies to the Gulf country remain intact.

The line links Hamad Port in Qatar with Mundra (Gujarat) and Nhava Sheva Port (Maharashtra) in India, the Minister of Transport and Communications (MoTC).

The maritime line also accepted coastal cargo from west and east coasts of India, for transshipment at Mundra. Transshipment cargo from South East Asia/Far East via Mundra too were accepted.

Qatar has been largely dependent on India. In 2020 the some of the products exported by India to Qatar included rice, jewellery and gold.

Read This: Nupur Sharma withdraws her controversial statement after suspension from BJP

It is also to be recalled that in January last year, India welcomed the restoration of diplomatic ties between Qatar and four other Arab countries that had imposed an embargo on it in 2017. India said that such a move would give a fillip to peace and stability in the region.