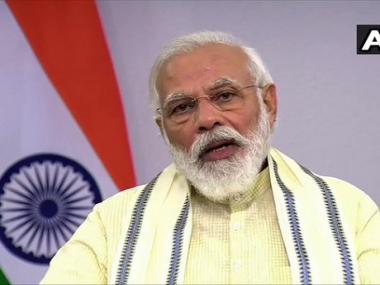 Under the scheme, five kgs of wheat or rice and one kg of pulses per month will be given free of cost to over 80 crore people till Diwali or Chhath pooja, said Modi.

Prime Minister Narendra Modi on Tuesday announced that the Pradhan Mantri Garib Kalyan Anna Yojana (PMGKAY), a free ration scheme, was being extended till the end of November.

“During the monsoon, work picks up pace in the agriculture sector and slows down in other sectors. It is also the season of festivals and expenses also go up. Hence, it has been decided Pradhan Mantri Garib Kalyan Anna Yojana will be extended till the end of November,” he said in a televised address.

Under the scheme, five kilograms of wheat or rice and one kg of pulses per month will be given free of cost to over 80 crore people till Diwali or Chhath pooja, he said. The scheme was initially rolled out in March following the imposition of the lockdown for three months.

The extension of the PMGKAY, said Modi, will cost the government Rs 90,000 crore more. “If we include the expenses incurred in the past three months, then it comes up to around Rs 1.5 lakh crores,” he said.

Modi said that the government had announced a package of Rs 1.75 lakh crore under the PM Garib Kalyan Yojana after the imposition of the lockdown. “In the last three months, Rs 31,000 crore have been deposited directly into Jan Dhan accounts of 20 crore poor families. During this time, Rs 18,000 crore have been deposited in the bank accounts of more than 9 crore farmers.”

The prime minister also said the government was working on a “One Nation, One Ration Card” initiative, which would benefit those who leave their villages for work and other purposes.

The prime minister also said timely lockdown to contain coronavirus and other decisions saved many lives, adding that in comparison to other countries across the globe, India has done well in dealing with the pandemic.

“We have now entered Unlock 2.0. We have also entered a season when illnesses like cold are on the rise. I request all of you to take care, ” he said.

However, he said that since “Unlock-1” has begun, some people have shown negligence and urged them not to let their guard down.

“Since Unlock-1 has began, negligence has been increasing in both personal and social spheres. Earlier, we were cautious about wearing masks, maintaining ‘do gaj doori’ and washing hands several times a day for 20 seconds. But today, when we need to be more cautious, it is a cause of concern that carelessness is increasing.”

The prime minister urged the governments, local authorities and citizens to display similar caution as during the lockdown period, with a special focus on containment zones. “If someone is flouting norms, we need to stop them,” he said, asserting that no one is above the law.