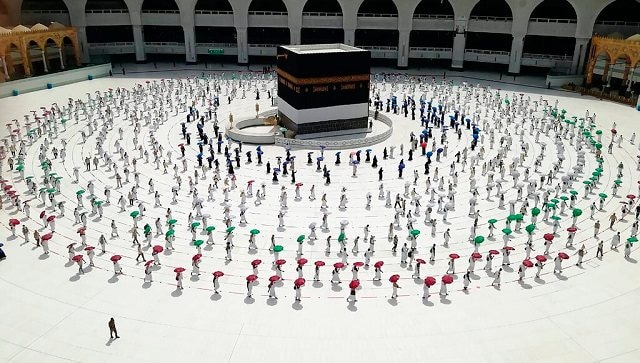 Muslim pilgrims circle the Kaaba, the cubic building at the Grand Mosque in Mecca, as they keep social distance to protect themselves against the coronavirus. AP

The Haj Committee of India on Thursday announced the Haj Action Plan 2021. The plan included several changes that were made keeping the COVID-19

According to a report in DNA, the Hajj pilgrims from India who will be allowed to travel to Saudi Arabia will be selected through a lottery in January and in July.

As per the report, this time, people who are between the ages of 18-65 age group will be allowed to perform Haj this year.

Those interested in travelling to Saudi Arabia for the holy pilgrimage, must fill the Haj application form that will be available from 7 November. The last date to submit the form in 10 December.

The report adds that if the application forms submitted exceed the required quota, then a lottery will be held in January 2021 to determine the passengers who will be selected for the trip.

The Haj Committee of India has also released an Action Plan for Haj 1442 (H) — 2021. According to the official statement, Haj 2021 will take place under Special Circumstances with Special Norms, Rules and Regulations as well as Eligibility Criteria, Age restrictions, Health and Fitness requirements and other relevant conditions as imposed by the Kingdom of Saudi Arabia.

The statement adds the sates mentioned in the Action Plan need to be adhered to by the State Haj Committees and all other agencies involved in Haj Management.

The cost of the Haj pilgrimage has increased as well. Selected Haj pilgrims will have to deposit Rs 1.5 lakhs of the first installment instead of Rs 81 thousand as earlier. Furthermore, the final installment will have to be submitted by 1 March, 2021. The departure will start from 26 June and the last flight will go on 31 July, 2021.

Save up 30% on Fashion and Kylie Skin launches