Migrants looking for the American dream were instead met with a deteriorating camp of makeshift tents under an overhead bridge between Coahuila, Mexico and Del Rio, Texas (Pictures: Reuters/AP)

Tens of thousands of Haitian migrants have arrived at the US-Mexico border in Texas over the past week, seeking to cross the Rio Grande and find refuge in America.

At one point, more than 14,000 migrants from Haiti sheltered under an overhead bridge between Coahuila, Mexico, and Del Rio, a small city in Texas that has been overrun with refugees in recent months.

That number dropped to 10,000 as of Tuesday, according to Department of Homeland Security (DHS) Secretary Alejandro Mayorkas.

In sweltering heat, migrants vying for the American dream were instead met with a deteriorating camp of makeshift tents. Many of the migrants come with families and young children, and must sleep on the ground or flattened cardboard boxes in tents made of discarded clothes and tree branches. 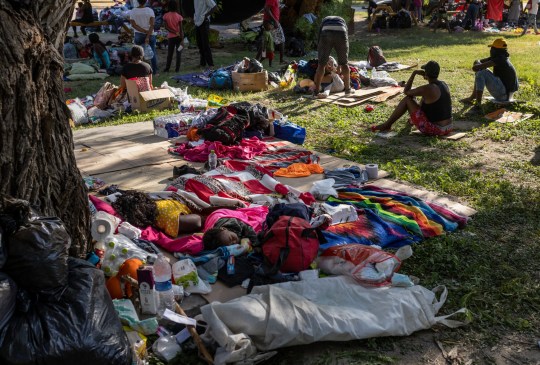 Haitian migrants sleep in makeshift camps at the US-Mexico border in Del Rio, Texas, as they attempt to cross the border into the US (Picture: Getty Images) 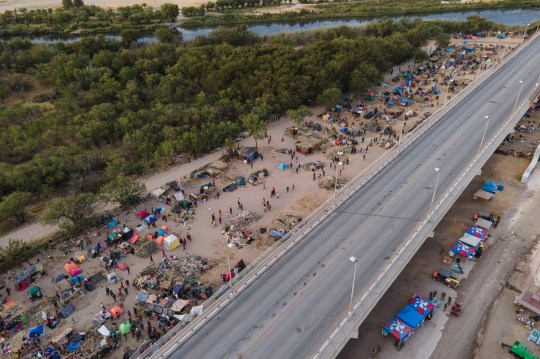 Migrants, many from Haiti, are seen at an encampment along the Del Rio International Bridge (Picture: AP)

An aerial photo shows 10-foot-wide piles of garbage from above the camp. At least two women have given birth, including one who tested positive for Covid-19 after being taken to the hospital, AP reported.

Striking videos taken by Al Jazeera and Reuters show DHS agents maneuvering their horses, almost as if herding cattle, to forcibly block and move migrants attempting to cross the border. The footage has circulated the Internet, sparking criticism far and wide.

In one video published by Al Jazeera, a border patrol officer on horseback yells: ‘This is why your country’s shit, because you use your women for this!’ down to a Haitian migrant sheltered with his family.

âThis is why your countryâs shit, because you use your women for this!â â mounted Border Patrol officer to Haitian migrant he was riding down, as he sheltered with his family.

One of the scenes we saw on the Rio Grande. Watch our video:

Another officer’s horse nearly charged into a migrant, who fell backwards into the water, a video published by Reuters shows.

On Thursday, White House Press Secretary Jen Psaki announced the Border Patrol will no longer have officers patrol on horses in Del Rio. 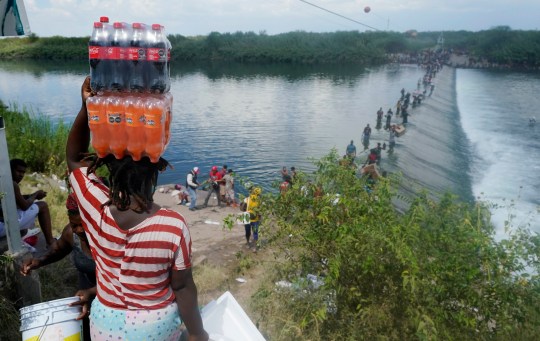 Haitian migrants use a dam to cross into and from the United States from Mexico, in Del Rio, Texas (Picture: AP) 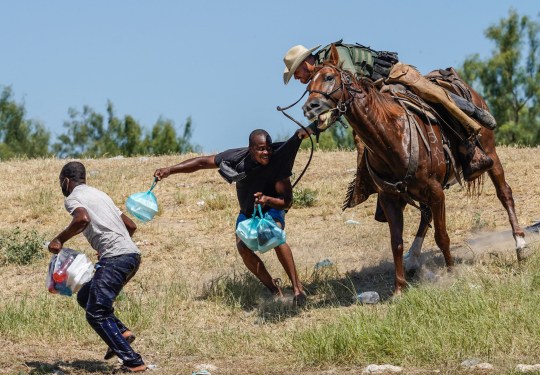 United States Border Patrol agents on horseback attempt to stop a Haitian migrant from entering an encampment on the banks of the Rio Grande near the Acuna Del Rio International Bridge in Del Rio, Texas (Picture: Getty Images) 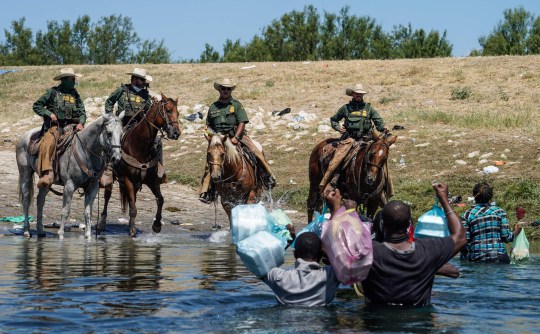 The cramped conditions have also fueled fears of a Covid outbreak, since migrants crossing the border are not required to be vaccinated before entering the US.

‘For a variety of reasons, perhaps mostly economic – the economy suffered with Covid, we have seen them migrate up over the last few months to our southern border,’ she told ABC.

Between the coronavirus, the political instability that followed the assassination of Haiti’s president in August and an earthquake that same month that left 1,200 people dead, thousands are seeking refuge elsewhere. 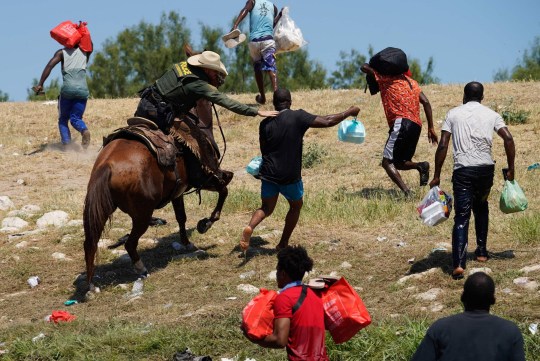 A US Border Patrol agent on horseback tries to stop a Haitian migrant from entering an encampment on the banks of the Rio Grande (Picture: Getty Images) 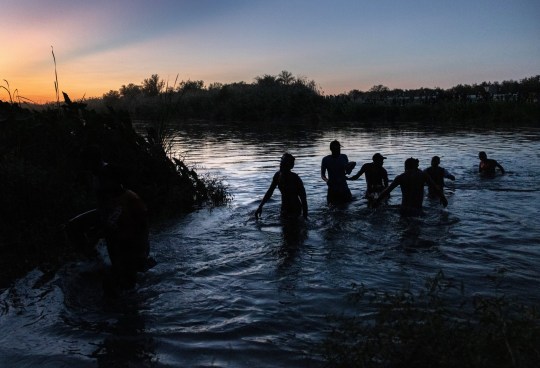 As US immigration authorities began deporting migrants back to Haiti from Del Rio, thousands more waited in a camp under an international bridge in Del Rio and others crossed the river back into Mexico (Picture: Getty Images) 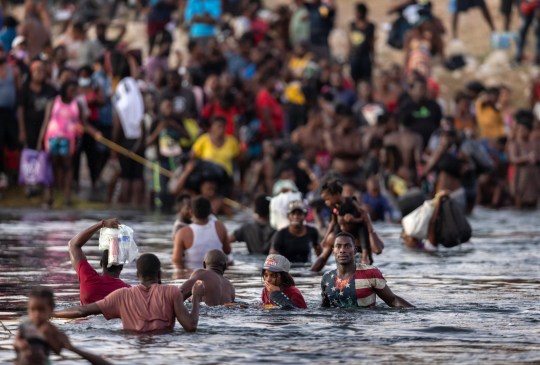 President Joe Biden is facing bipartisan backlash over the current crisis and its handling by the DHS.

Senate Majority Leader Chuck Schumer, a Democrat and ally of the administration, said images of the treatment of the migrants ‘turn your stomach’ and called on Biden to discontinue the ‘hateful and xenophobic’ policies of his predecessor, Donald Trump, AP reported.

Vice President Kamala Harris said the images ‘deeply troubled’ her. The administration faces similar attacks from Republicans, who say Biden isn’t doing enough to deal with what they are calling a ‘crisis’ at the border.

California Congresswoman Maxine Waters called the treatment of Haitian migrants ‘worse than what we witnessed in slavery’.

Homeland Security Chief Alejandro Mayorkas on Tuesday tweeted that the images ‘horrified’ him, later sharing that the agents involved have been placed on administrative duties pending the outcome of an investigation. 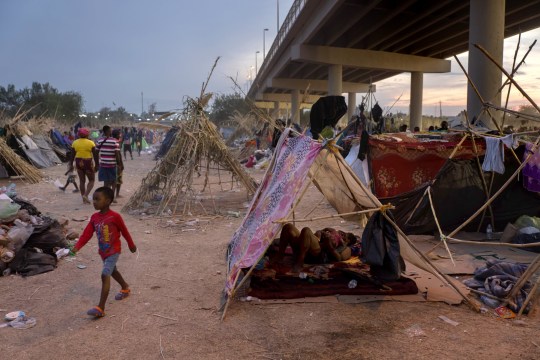 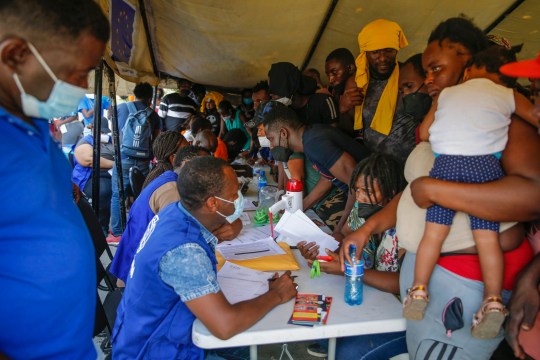 As migrant camps grow increasingly more crowded on both sides of the US-Mexico border, US officials began sending some Haitian migrants on flights back to Port-au-Prince (Picture: AP)

Biden has been blamed in part for the flux of migrants because of a proclamation from May that allowed Haitians in US protection status, preventing them from being deported for 18 months due to instability in their home country. It also allows for Haitians to apply for documentation to work in the US.

Amid the deteriorating conditions in migrant camps on both sides of the US-Mexico border, US officials on Wednesday released some of the thousands of Haitian migrants in south Texas, while deporting others on flights to Port-au-Prince.

Some Haitian immigrants deported have bit Immigration and Customs Enforcement officers and assaulted pilots on these flights, the Daily Mail reported.

As of Thursday, 12 flights had sent 1,401 people back to Haiti, while 3,206 remained in custody and 5,000 are still camped out underneath the International Bridge in Del Rio. It’s unclear where the other 5,000 who were at the camp have now gone, as some may have turned around at the border. 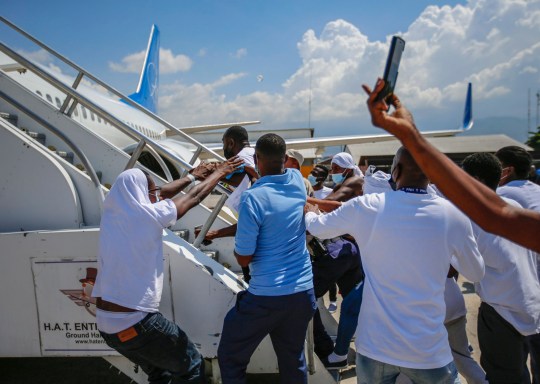 Haitians deported from the US try to board the same plane in which they were deported, in an attempt to return to the US (Picture: AP) 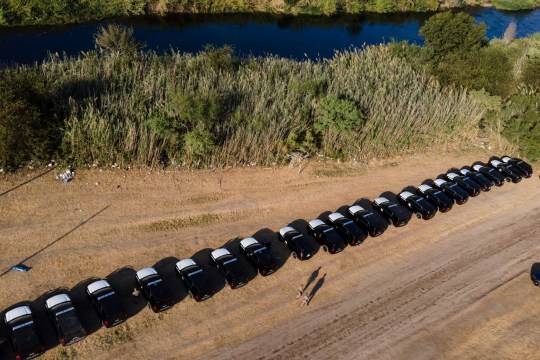 A line of Texas Department of Safety vehicles form a ‘steel barrior’ on the bank of the Rio Grande near an encampment of migrants, many from Haiti, to prevent them from crossing the border into Texas (Picture: AP) 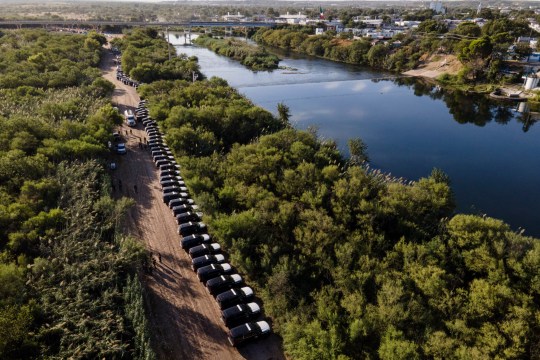 A ‘steel barricade’ has been formed on the Texas border at the order of Governor Greg Abbott, who called the measure ‘unprecedented’ (Picture: AP)

Those 3,206 Haitian migrants have either been moved to custody under Customs and Border Protection (CBP) or to other sectors of the border to either be expelled or placed into removal proceedings, the Daily Mail reported.

It’s unclear how many of those in CBP custody will be released and how many will be expelled.

The influx of migrants at the US-Mexico border has spurred ‘unprecedented’ measures to prevent more Haitian migrants from entering Texas. Governor Greg Abbot has been forced to create a ‘steel barrier’ of hundreds of vehicles at the border.

The ‘steel barricade’ consists of at least 150 state troopers, with officers reassigned from their day-to-day duties and traveling from as far as 500 miles away to assist Border Patrol agents, according to the Washington Examiner.

Abbot also criticized the Biden administration’s response to the situation at the border, saying Texas would step up and add $2billion toward border security funding, the Washington Post reported.