Countries aiming to sharply reduce their emissions to meet climate goals must be prepared for staggering costs and looming political battles as they seek to overhaul swaths of their economies, climate analysts and economists say.

The International Renewable Energy Agency, an intergovernmental organization based in Abu Dhabi, said in March that the world would need to invest $115 trillion through 2050 in clean technologies, such as solar power and electric vehicles, to limit global warming to 1.5 degrees Celsius, or 2.7 degrees Fahrenheit. Such climate goals, made at the 2015 Paris accords, were revived in the Earth Day Climate Summit hosted last week by President Biden.

Environmentalists and some economists say the changes would translate into innovative technologies and job creation, while saving a million lives annually from lowering air pollution and circumventing higher water levels that would swamp coastal cities. Still, the upfront costs would be a challenge, requiring revamps across many sectors, including steel production, agriculture and cargo shipping.

Mr. Biden’s target of sharply reducing U.S. greenhouse-gas emissions by 2030 would force companies to speed the pace of change and present new expenses. Much of the world’s hopes for reducing carbon emissions, however, rest on China and India, which are heavily dependent on coal—considered the dirtiest fossil fuel—to generate power. China is the No. 1 emitter globally.

an international-relations professor at the University of California San Diego who focuses on climate policies, said getting to zero requires the difficult task of “eliminating essentially all fossil fuels.”

China needs to invest $21 trillion over three decades to overhaul transportation, industry and construction while building nuclear, wind and solar production facilities to reach the goal of zero net emissions by 2060, according to a report presented by China’s leading climate experts in October at Tsinghua University. That amounts to more than 2.5% of its annual gross domestic product. 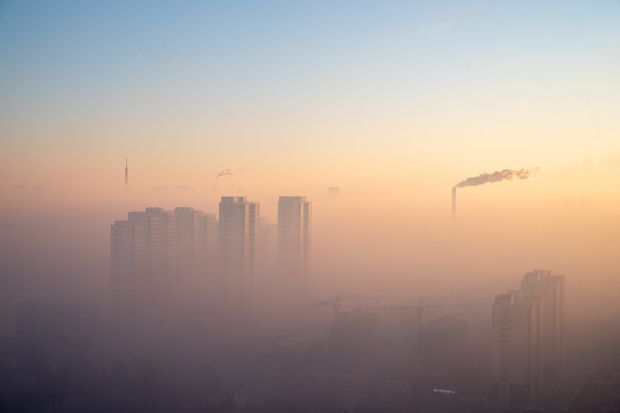 China is the world’s leading source of carbon emissions. The city of Qiqihar in 2019.


Weaning China off coal won’t be simple. Coal supplied 56.8% of China’s energy consumption in 2020, according to official national data, with 1,082 plants generating nearly 1,100 gigawatts of power.

With its vibrant economy barely slowing during the coronavirus pandemic, China is expected to consume 6% more coal by 2025 compared with 2020, the China National Coal Association reported last month. In 2020, China proposed 73.5 gigawatts of new coal plants, more than five times than the rest of the world combined.

addressing heads of state at the summit, said the country would reduce coal consumption in five years. But he didn’t offer an end to the burning of coal nor did he accelerate the timetable for China to lower carbon emissions, as environmentalists had hoped.

Still, after adopting recommendations made in the Tsinghua University report, Mr. Xi in December announced at a United Nations summit plans to lower China’s carbon intensity by more than 65% from its level in 2005.

He also said China would increase the share of nonfossil fuels in its energy mix to about 25% by 2030, up from 15.3% in 2020. The president also pledged in December to bring the total installed capacity of wind and solar power to over 1,200 gigawatts by 2030, more than double the present capacity.

Some point out that much of China’s dependence on fossil fuels has to do with the economic stimulus that comes with the construction of coal plants in certain regions; China’s coal plants run at only 49% capacity. Many of those on the drawing board might never be built because they aren’t economically viable, according to energy researchers.

But China has balked at having to keep up with developed countries in lowering emissions.

How realistic do you think these commitments to reduce emissions are? Why? Join the conversation below.

The Biden administration has set a goal for cutting emissions by as much as 52% by 2030 from 2005 in the U.S., and an outright end to greenhouse-gas emissions by 2050. Mr. Biden plans to double financing for low-income countries for climate-reduction programs while prodding private business to develop green-friendly initiatives.

The goals laid out in the Paris agreement aren’t legally binding. But they rely largely on the international consensus that ecosystems could be devastated unless the rise in global temperature is limited to about 1.5 degrees Celsius above preindustrial levels.

Another fast-growing developing country, India, provides another challenge when it comes to reducing dependence on coal.

Coal supplies nearly half of the country’s energy, and new coal plants that would produce 100 gigawatts have been approved. India is second in the world in coal consumption, with its global share expected to rise from 11% to 14% in 2030.

reiterated at the climate summit that India’s goal is to build 450 gigawatts of renewable-energy sources by 2030, including solar, wind and small hydroelectric plants. If it happens, that would make up about 55% of the 817 gigawatts that India’s Central Electricity Authority estimates the country will need in 2030. 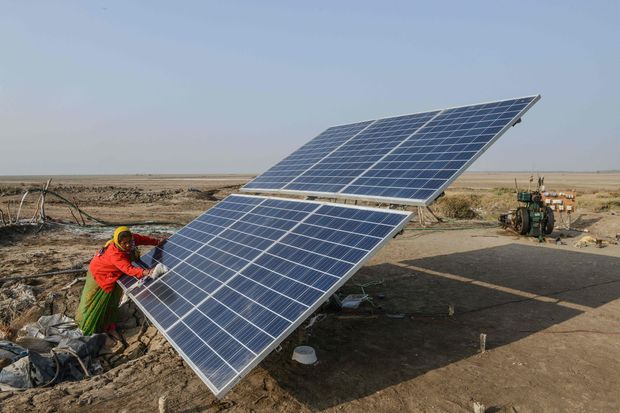 India is seeking to reduce its reliance on coal and add renewable-energy sources, such as solar power.

Obstacles include the economic and geopolitical: Big solar developers generally contract with state-owned power-distribution companies to sell them the electricity at a set price for a term that can be as long as 25 years. But solar prices have fallen so quickly that some financially strapped distribution companies have balked at paying the higher prices they agreed to in older contracts.

Indian policy makers are also increasingly uncomfortable at buying so much of their solar equipment from their rival to the north, China, which controls the bulk of solar manufacturing.

Addressing the concerns from countries about overhauling their economies, White House climate czar

emphasized the potential advantages of moving toward greener energy and transportation sources.

“No one is being asked for a sacrifice,” he said Friday. “This is an opportunity.”

The International Renewable Energy Agency says the shift should create three times more jobs than it destroys, because renewable-energy industries tend to be more labor-intensive than fossil-fuel industries. The International Labor Organization said in 2018 that the green transition would destroy six million jobs but create 24 million new ones world-wide by 2030. According to the Organization for Economic Cooperation and Development, the shift is likely to resemble previous transitions when industrialized societies embraced new technologies, such as the internet.

But such radical, real-world changes would require deft political handling, and innovative solutions to address those who could initially be hurt, such as coal miners in Appalachia and working-class people in Europe who might face higher taxes on gasoline.

There, countries are ahead of other regions in laying out plans for reaching zero emissions by 2050. But leaders face political dilemmas. In the biggest economies, the burden of the green transition has partly fallen on the working class.

Meeting the goal of cutting emissions by at least 55% by 2030 from the baseline of 1990 would cost $422 billion in annual investments to the region’s energy infrastructure, says the European Commission, the executive arm of the 27-nation European Union. Last week, EU lawmakers and national governments agreed on a trillion-dollar plan designed to achieve net-zero carbon-dioxide emissions  by 2050.

German electricity prices rose sharply over the past decade to help pay for the country’s shift away from nuclear energy and coal to renewables. People who live in more-affordable suburbs and rural areas, and commute to jobs in urban centers, face higher taxes on fuel and vehicles in some countries. That is why French commuters led the yellow-vest protest movement that erupted in late 2018 in opposition to President

plans to raise fuel taxes, ultimately forcing him to back down. 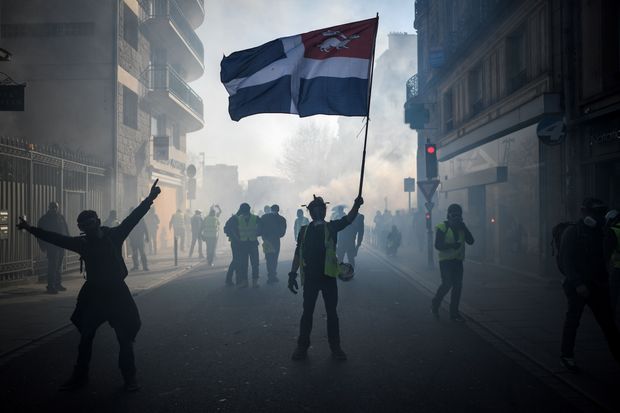 Yellow-vest protests in France, including this one in 2019, challenged President Emmanuel Macron’s plans to raise fuel taxes.

The experience made Mr. Macron, a business-friendly centrist, an opponent of dramatic changes to the French economy. The country is unlikely to meet climate targets without new policies.

The EU also faces hurdles to its climate goals because of its Eastern European members’  dependence on burning coal to produce electricity. Leaders in Poland, Hungary and the Czech Republic are planning to solve their coal problem with a big expansion of nuclear energy. But policy makers in Brussels have yet to decide whether nuclear power would qualify for EU subsidies to meet the bloc’s climate goals.

In addition, Europe’s coal industry is preparing for mass layoffs as the region pursues its climate goals. In Germany, one of Europe’s biggest coal burners, the government has pledged nearly $60 billion to ease the economic pain of shutting down mines and coal-burning power plants. German power company

“The consequences for our employees and our company are tremendous,” RWE Chief Executive

The German government’s payments are being scrutinized by the European Commission, which regulates aid that governments give to the private sector, and environmental groups.

“As the EU tries to reach its climate and environmental goals,” said the European Environmental Bureau, an umbrella organization of environmental groups, “the Commission must make sure that it is not giving the green light to subsidies that drive the bloc in the opposite direction.”

—Phred Dvorak contributed to this article.

Write to Juan Forero at Juan.Forero@wsj.com, Matthew Dalton at Matthew.Dalton@wsj.com and Sha Hua at sha.hua@wsj.com

Welsh holiday retreat bans guests who have had Covid vaccine

How to Track Your Period: Best Methods and Apps