The Somerset festival is back later this month for the first time since 2019 (Picture: Matt Cardy)

After three years of waiting, Glastonbury Festival is set to return later this month.

The legendary Somerset concert will be held between June 22-26 after an absence enforced by Covid-19.

More than 200,000 people are expected to descend on Worthy Farm for four days of music, arts and partying.

With just two weekends to go, the most important question for any festival-goer is once again demanding an answer: should you pack your wellies?

Weather conditions for Glasto are notoriously hit and miss, with the festival seemingly as likely to be bathed in glorious sunshine as it is to be turned into a swamp by heavy rain.

Although June is the start of proper summer, it is on average a much wetter month than March, April or May.

The Met Office warns it is far too early to forecast the weather two weeks ahead with any confidence – but the omens don’t look great. 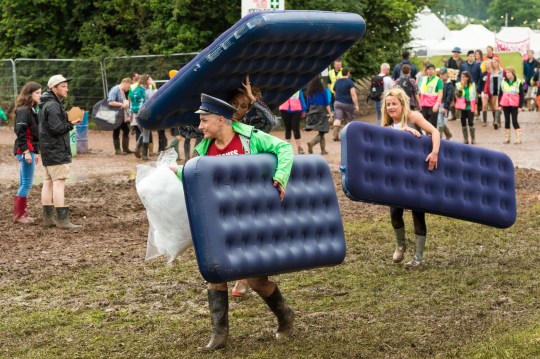 According to its long range forecast for June 9 to 22, we should see some ‘fine and dry weather across southern and southwestern parts of the UK’ from the middle of next week.

But computer modelling suggests there could be a turn beyond that, with the Met warning: ‘Towards the end of the period, the weather is likely to become more unsettled again.’

It said there are early signs we could be heading for ‘above average rainfall’ towards the end of June, although the signal is ‘weak’ for the time being.

According to the BBC’s long range forecast, early forecasts suggest ‘near-seasonal temperatures and precipitation with no sign of significant summer heat’.

Paul McCartney, Billie Eilish and Kendrick Lamar are set to headline the festival.

The festival looks set to be impacted by planned rail strikes due to take place on June 21, 23 and 25.