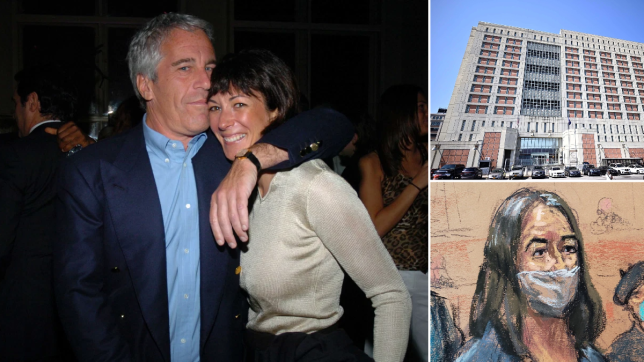 Ghislaine Maxwell’s lawyers argued that she should be taken off suicide watch because ‘she’s Jeffrey Epstein’ (Pictures: Getty Images/Reuters)

Ghislaine Maxwell has been using a sock to block her eyes during jail guard flashlight checks, her lawyers revealed while requesting that she be removed from suicide watch because ‘she’s not Jeffrey Epstein’.

Maxwell’s lawyers on Monday morning sought to differentiate her from Epstein, who killed himself in his jail cell while awaiting trial on sex trafficking charges that Maxwell is accused of playing a role in.

‘She’s kept at night every 15 minutes with lights shining in her eyes so that they can check her breathing’, Maxwell’s attorney David Markus told a three-judge panel at the US Court of Appeals for the Second Circuit. ‘They’re doing it because Jeffrey Epstein died on their watch, and again, she’s not Jeffrey Epstein’.

In a court filing on Monday, Maxwell’s lawyers wrote that ‘the idea that she has an eye mask is wrong’. They claimed that ‘she either uses a sock or a towel to block out the light on her own’.

The Bureau of Prisons reportedly placed Maxwell on suicide watch a week after she was arrested in July. Her lawyers believe that was influenced by American financier Epstein killing himself in August 2019 shortly after prison officials removed him from suicide watch.

Circuit Judge Pierre Leval raised Maxwell’s lawyers’ argument that the suicide checks have interfered with her trial preparations and questioned the government on the matter.

‘One of the main complaints in the defendants brief is that she’s being improperly treated as a suicide risk in a manner that makes her life hell and doesn’t allow her to sleep. They say there’s no reason for it except for the fact that Jeffrey Epstein committed suicide’, Leval said. ‘The Bureau of Prisons doesn’t want to risk another embarrassment to itself, which is understandable in the part of the Bureau of Prisons, but it’s perhaps unnecessary’.

When Assistant US Attorney Lara Pomerantz said the checks and conditions Maxwell has been subjected to are ‘routine’, Circuit Judge Richard Sullivan seemed sceptical.

‘Everybody? They do that to all inmates?’ Sullivan said.

US District Judge Alison Nathan, who is presiding over Maxwell’s case, has already rejected three bail applications from her lawyers, so lifting her suicide watch appears to be an uphill battle regardless of the three-judge panel’s opinions. The panel delayed their decision on the matter.

Maxwell appeared in federal court in New York on Friday afternoon for the first time since she was arrested. Looking drab in a blue smock, ankle shackles and with sunken eyes and graying roots and grown out hair, Maxwell pleaded not guilty to an eight-count superseding indictment alleging that she conspired with Epstein in sexually abusing four young women.

The disgraced British socialite is being held at the Metropolitan Detention Center in Brooklyn.