Photos of Jeffrey Epstein’s mansion, where he allegedly sexually abused young girls with help from Ghislaine Maxwell, were released this week as her criminal trial continues (Pictures: US District Attorney’s Office)

Never-before-seen photos of the Florida mansion where Jeffrey Epstein is alleged to have sexually abused teenage girls with the help of Ghislaine Maxwell were released as her child sex-trafficking trial continues in Manhattan.

Jurors on Monday were shown photographs taken during a 2005 FBI raid on the late pedophile’s Palm Beach home.

One image they were shown features a photograph of Epstein with a girl laying over his lap, her bottom exposed as he pretends to bite her.

Several drawings of naked women can be seen hanging on the walls, as well as a sketch of ‘the lady of the house’ Maxwell, featured naked, hung in the marble-walled bathroom. 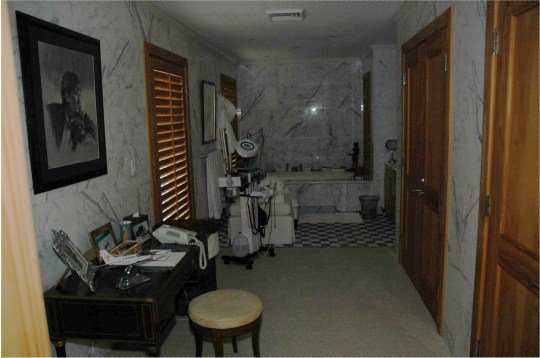 A photo of Jeffrey Epstein’s Palm Beach home appears to show a bathroom, featuring a portrait of Ghislaine Maxwell above a desk (Picture: US District Attorney’s Office) 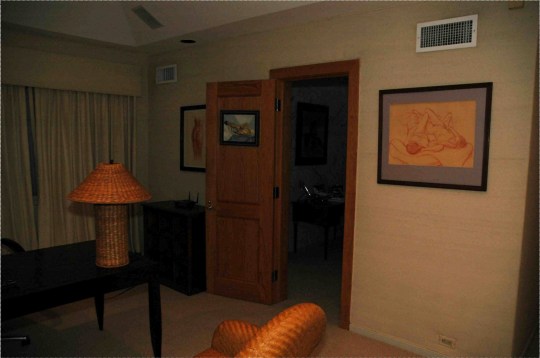 A photo from inside Jeffrey Epstein’s Florida mansion appears to show a drawing featuring a naked women on the wall (Picture: US District Attorney’s Office)

Another portrait of Maxwell is the room shows her holding her Yorkshire terrier, Max, who was mentioned in several testimonies from witnesses.

During debate on Friday over whether the 2005 photographs would be shown, Assistant US Attorney Maurene Comey said they are relevant because they are ‘evidence of Jeffrey Epstein’s lifestyle’ that ‘contradicts the public persona presented by the defense’, the Miami Herald reported.

US District Judge Alison Nathan allowed images of two framed photographs to be shown to the jury – one featuring a girl on Epstein’s lap.

Photographs showed the 2005 home, including its bathrooms and bedrooms, without featuring any explicitly sexual items. 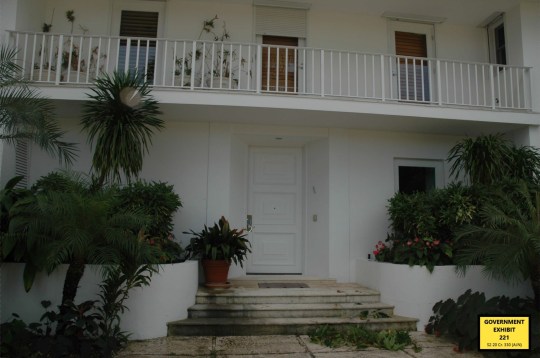 A photo from the FBI raid in 2005 of Jeffrey Epstein’s Florida home appears to show the exterior of the home he allegedly sexually abused girls as young as 14 years old (Picture: US District Attorney’s Office) 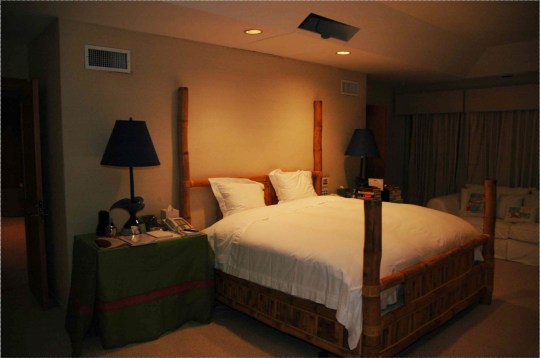 The photos were entered into evidence in Maxwell’s ongoing trial in a Manhattan federal courthouse, where she faces charges for child sex-trafficking.

Maxwell faces six charges related to recruiting and grooming four underage girls for her former boyfriend Epstein between 1994 and 2004. She has denied all charges.

Epstein died by suicide in a Manhattan jail cell before he could be tried on sex abuse charges.

On Friday, Epstein’s green massage table was unfolded in court for the jury to see. 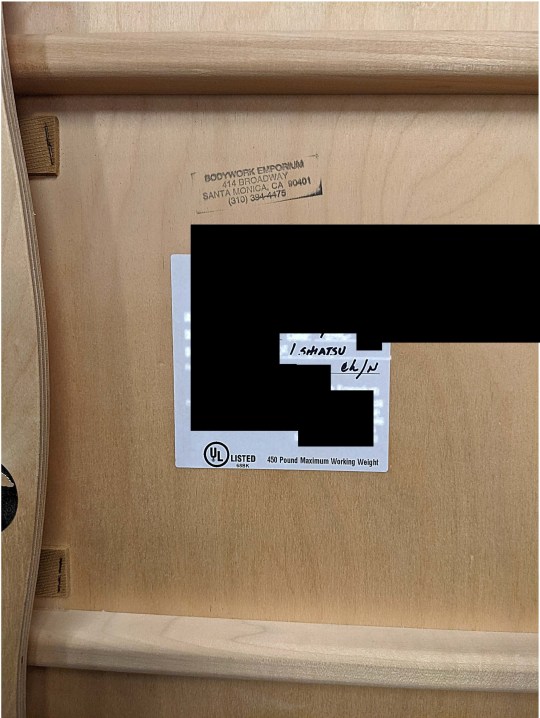 What appears to be the underside of Jeffrey Epstein’s massage table. A table belonging to him was seized by the FBI in 2005 was presented to the jury on Friday (Picture: US District Attorney’s Office)

The massage table – along with a ‘Twin Torpedo’ sex toy – were seized from Epstein’s Palm Beach estate in 2005 by former Palm Beach police officer Gregory Parkinson.

On the stand, Parkinson confirmed it was the same table he seized from Epstein’s property nearly two decades ago.

‘It’s from the second floor south bathroom, where the shower was,’ the former cop told the courtroom, adding that he recognized the table by it’s appearance, property number and ‘made in Vista, California’ sticker, the Daily Mail reported.

Several witnesses have testified in the trial, which is expected to last through January. They include a former property manager and two women who claim Epstein abused them as teens with the help of Maxwell. 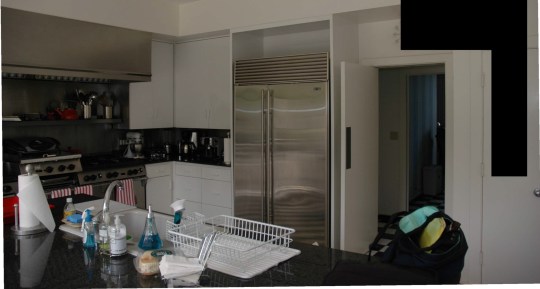 The kitchen inside Jeffrey Epstein’s Florida mansion, where he allegedly sexually abused girls with the help of Ghislaine Maxwell (Picture: US District Attorney’s Office) 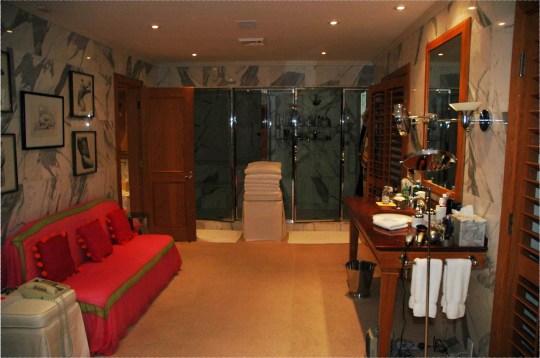 Photo from inside Jeffrey Epstein’s Florida home appears to show a bathroom with drawings of naked women on the walls (Picture: US District Attorney’s Office)

On Monday, a woman testifying under the pseudonym ‘Kate’ recalled the horrors of Epstein’s ‘massage room’, saying Maxwell asked her to help find other ‘cute, young, pretty girls, like you’ who could give Epstein oral sex.

While Kate is not considered a minor victim in the charges because she was 17 years old at the time of the alleged abuse, over the age of consent, another woman, ‘Jane,’ also said Maxwell pulled her into Epstein’s predatory circle when she was a teen.

When asked by prosecutor Alison Moe about abuse she suffered at the hands of Epstein, Jane testified that it began when she was just 14 years old, and that Maxwell was often in the room with Epstein during sexual contact. 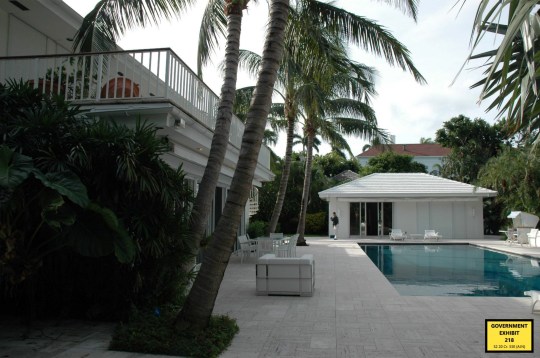 Photos of the pool at Jeffrey Epstein’s house were released this week (Picture: US District Attorney’s Office)

The newly released photographs also show images of Epstein’s Palm Beach pool, where former property manager Juan Alessi testified that he saw ‘many, many, many females’. He said that about 75% of the time, those females were topless.

He recalled a 58-page house manual for staff, provided by Maxwell, who told him he was not allowed to look Epstein in the eyes or speak to him first.

Alessi also revealed he was tasked with having to clean the sex toys after the sexual ‘massages’ Epstein and Maxwell would allegedly have young women participate in. He testified that when cleaning up the toys, they would be put away in Maxwell’s closet.

Epstein’s massage table was also unfolded in court in a dramatic moment on Friday during the trial.