announced the U.S. was rejoining the Paris climate accord, one of the first world leaders to welcome him back was President

The French leader had been a persistent critic of former President

withdrawal from the agreement, calling on world leaders to “Make Our Planet Great Again,” in an apparent riff on Mr. Trump’s campaign slogan.

In France, however, Mr. Macron is discovering how hard the agreement is to implement without imposing painful changes on the way people live in developed economies. France is falling behind the rest of Europe in reducing emissions, and Mr. Macron hasn’t settled on a strategy to meet the country’s pledges under the Paris accord.

Mr. Macron created an assembly of everyday citizens to come up with a sweeping plan to place France on a trajectory to become carbon neutral by 2050. But the assembly’s plan—which ranges from curbs on domestic flights to taxes on SUV sales—has now run into opposition from Mr. Macron himself.

“We need to make some adjustments,” said a close presidential aide, adding that some of the proposals were unacceptable to the public. Mr. Macron recently told the youth-focused news website Brut that the government needed to study the proposals’ economic impact, adding that it wasn’t up to the assembly to “anticipate everything, think of everything.”

In recent years, the Macron government has taken a piecemeal approach that includes a national ban on fracking and subsidies to encourage people to buy electric or hybrid vehicles. 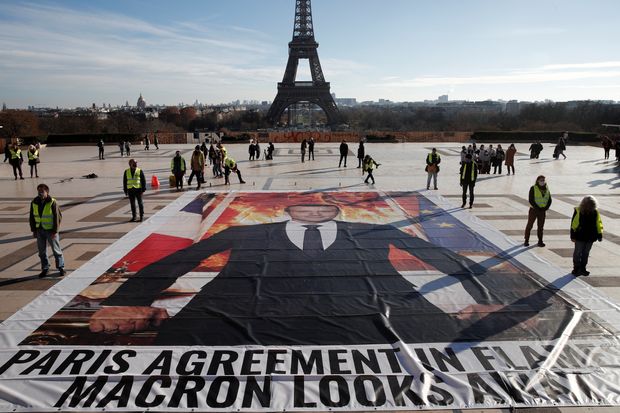 Climate activists in Paris stood by a portrait of French President Emmanuel Macron in December.


Greenhouse-gas emissions in France fell by just 1% a year between 2015 and 2018, compared with the 3% annual decline the government targeted during that period, according to the High Council on Climate, an independent watchdog set up by Mr. Macron. In 2019, emissions declined by 0.9% while they fell by 3.7% across Europe. This year emissions are expected to decline substantially, but only because of two pandemic lockdowns, the High Council said.

The shortfalls point to one of the fundamental weaknesses of the Paris agreement: It lacks an enforcement mechanism. The agreement seeks to limit the rise in global temperature to less than two degrees Celsius (3.6 degrees Fahrenheit) above preindustrial levels, with a target of no more than 1.5 degrees. But it is up to individual countries to set their own national targets to help the world reach that goal.

President Biden on Wednesday suspended new oil and gas leases on federal land and directed the Department of the Interior to identify steps to double offshore wind production by 2030 and to employ Americans on climate-focused public-works projects.

The U.S. has been cutting its emissions, albeit not fast enough to meet its target of 26% to 28% reduction by 2025 and 80% by 2050, according to energy and economics research firm Rhodium Group. China said it won’t start reducing emissions before 2030. It pledged to become carbon neutral by 2060.

France initially pledged to reduce greenhouse-gas emissions by at least 40% by 2030, but French officials expect to raise that target to meet the European Union’s goal of cutting emissions by 55% over that time period. The U.K. has pledged to cut emissions by 68% by 2030.

Mr. Macron says he has done more than any other previous government in France to fight climate change. “I don’t take lessons from anyone,” Mr. Macron told Brut.

Part of France’s challenge is that it has a lower carbon footprint than the U.S. and most other big EU economies. In 2019, French nationals emitted an average of 5 metric tons of CO2 per person, compared with 16 metric tons for U.S. nationals, according to the Global Carbon Atlas.

That makes further reductions an inherently tougher task. Many of the Paris accord signatories, including Germany, have more headroom to lower emissions because they can focus on closing coal-burning plants that produce higher emissions. France doesn’t have that luxury, because its electricity is largely produced by nuclear power plants, which generate fewer emissions.

Deeper reductions, French officials say, are likely to cut closer to the muscle of France’s economy. The Macron government’s plan to increase France’s carbon tax on fuel—a move intended to curb emissions and help fund the transition to cleaner technologies—ignited the yellow-vest protest movement in November 2018. Drivers clad in reflective safety vests clogged highways; vandalized shops and defaced government buildings and monuments, forcing Mr. Macron to abandon the tax hike. One French official said it would be hard to hit France’s Paris accord target without raising the carbon tax again.

and actress Marion Cotillard met with Mr. Macron in the Élysée Palace, persuading him to establish an assembly of 150 citizens to propose ways to slash emissions.

“It’s not something that comes from the top, that’s imposed. It’s something that French people decide for themselves,” Mr. Dion recalled telling Mr. Macron at the time. In establishing the assembly, Mr. Macron said its proposals would either be immediately enforced, put to a public referendum or submitted directly to Parliament for a vote. Mr. Dion became one of the assembly’s three guarantors, in charge of making sure that the 150 citizens worked together and that the government kept its word.

For months, the assembly met with climate experts, business leaders, economists and lawyers, measuring the impact of each of their 149 proposals.

Mr. Macron rejected three proposals, including a 4% tax on dividends to help fund new environmental policies, which he said would discourage investment. He accepted proposals to impose a moratorium on the construction of shopping districts on city outskirts and to create an emissions grading system for goods and services.

Can President Macron continue to take the lead on global climate policy in the face of pushback at home? Why or why not? Join the conversation below.

Other measures were watered down, angering many members of the convention. A proposed tax on SUVs, for instance, would only apply to vehicles heavier than 1,800 kg, or 3,968 pounds, instead of the proposed 1,400 kg. And a proposal to ban domestic flights that could be covered by a train trip of less than four hours was abbreviated to a two-and-a-half hour train trip.

“The ideas are still there, but not the ambition,” said 32-year-old social worker

In November, Mr. Dion launched a petition online asking Mr. Macron to keep his word and submit the proposals unfiltered to Parliament. Mr. Macron “is torpedoing the work of the assembly he set up, by not allowing them to reach the targets he had himself set, it’s schizophrenic,” Mr. Dion said.

“I have 150 citizens and I respect them, but I’m not going to say that because these 150 citizens wrote something, it’s the Bible or the Quran,” Mr. Macron told Brut.

World leaders welcomed President Biden’s move to rejoin the Paris climate accord. As the president reverses many of his predecessor’s climate policies, here’s what it means for the global race to meet ambitious emissions targets. Photo: Jim Watson/AFP via Getty Images