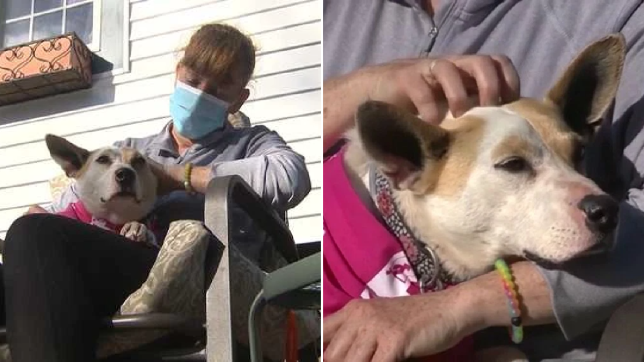 Renee Perry was reunited with her foster dog Bay five years after she went missing from a dog sitter’s home (Pictures: WBZ-TV)

A foster dog that went missing in June 2016 was miraculously found and reunited with its owner who never gave up hope in finding her. Renee Perry had been searching for Bay since she went missing from a dog sitter’s home in Farmington, Massachusetts, when she was just 1 1/2 years old.

On Tuesday, Renee received an unexpected phone call. Bay had been found in Needham, a town about 10 miles away from where she vanished five years ago.

‘I did like to think about what it would look like if I were to get her back, so it was a pleasant surprise, a shock’, Renee told WBZ-TV on Thursday. ‘Absolutely, she was always in my mind, always’.

A couple found Bay wandering near their home and called Missing Dogs Massachusetts, a nonprofit aimed at helping families find their missing dogs. The organization set up a large kennel trap in the couple’s backyard, and Bay fell for it.

Within two hours, members of the nonprofit scanned Bay’s chip and discovered who she belonged to. Missing Dogs Massachusetts volunteer Danielle Matthew told the TV station that she was amazed that Bay survived five New England winters and called her ‘a resilient little dog’.

‘As soon as Renee got out of work, she was reunited with her’, Missing Dogs Massachusetts volunteer Deb Newport said.

Renee admitted that she did not believe it was her beloved Bay at first.

‘I saw the pictures, and it did look like her but her nose was darker’, Renee said. ‘She just looked heavier, she just looked different’.

Renee said she was ‘forever thankful’ to the family that let Missing Dogs Massachusetts set up the kennel trap in their yard.

‘To get her back, I think it’s an understatement to say it’s a miracle because it’s just crazy’, Renee said. ‘It’s surreal’.

The same day they were reunited, Renee took Bay to a veterinarian for a check-up and her vaccines. Renee said they are taking ‘baby steps’.

‘Go back to putting the leash on her and trying to get her to walk on a leash and that’s our goal’, Renee said. ‘To keep going where we left off five years ago’.