Though the Rajpath area will only be formally opened to the public by the Prime Minister next week, anyone traversing that stretch can see how wrong the naysayers were

The doomsayers have been rebuffed again as the renovated Rajpath area prepares to welcome back aam Indians.

Few have the grace and gumption to own up when they have been proved wrong. So journalist Tavleen Singh’s admission this week on Twitter that the about-to-reopen lawns alongside Rajpath in New Delhi actually look good after the revamp is unlikely to trigger an avalanche of similar acknowledgements. Who would want to admit they had been instigated by photographs and their own biases rather than any real proof of imminent disaster?

(File) The site of redevelopment work of the Central Vista Avenue by Central Public Works Department along the Rajpath road in front of India Gate in New Delhi. AFP

In the summer of 2021, a series of photos of New Delhi’s Rajpath looking like Kharkhiv after the Russians bombed it, exploded across the Internet. The accompanying anguished posts screamed that the Union government intended to change the entire character of Lutyens’ Delhi starting with uprooting everything on the Rajpath lawns — from trees and lamp-posts to the ornamental pools, iron chains and bollards. Apocalypse was deemed to be imminent.

The photos, of course, were deceptive. Taken long-distance from a vantage point, they telescoped the digging, laying, constructing and covering work along a long stretch into consolidated untidy, ugly pictures of devastation and chaos. Little wonder that concerned people (some of whom had not visited the Rajpath lawns for decades, if ever at all) erupted in orchestrated anguish about the ‘vandalism’ of the government, its chosen architects and agencies.

Wild rumours about what those beloved trees, lampposts and other elements would be discarded found a willing and vocal audience, especially among the permanently aggrieved. Some imagined that a crass amusement park or perhaps a gargantuan statue or two would sprout; others thought that the open spaces would be corralled for the exclusive use of the government, banishing the aam janta and their ice-cream vendors from Rajpath.

As the leading lights of Delhi had not been consulted for the project, their angst was the loudest and longest. It was also understandable, though how they then let ministries and Vigyan Bhavan brazenly encroach on the lawns for parking and even hutments is unclear. How they also let eyesores like the hotels Meridien and then public sector Kanishka (now Shangri-la) that loom well above the jamun tree-level Central Vista, come up in the 1980s, is moot too.

Central Vista Diaries Part 5: Moving National Museum to North and South Blocks will do wonders for its visibility

Central Vista Diaries Part 3: How green was my Rajpath anyway?

Central Vista diaries: What to do about concerned retired top bureaucrats?

A person held in high regard by this cohort, heritage conservation activist AGK Menon had suggested in 2019 that Central Vista required an upgrade. “For example, the trees are dying,” he had said. “You can’t wish away anything, you have to intervene because these trees are already 80-90 years old.” He had even said replacement is necessary. His pragmatic assessment fell on deaf ears as many protestors probably did not know trees also have lifespans.

He had also pointed out that the Central Vista had been designed in 1911 when Sir Edwin Lutyens, his colleagues and their imperial client could not have anticipated the one lakh daily visitors that the Rajpath area currently attracts. Menon thus concurred that the facilities of that area needed to be improved. Needless to say, he did not find any takers for his argument and by 2021 the consensus of the concerned was that the Central Vista area was doomed. 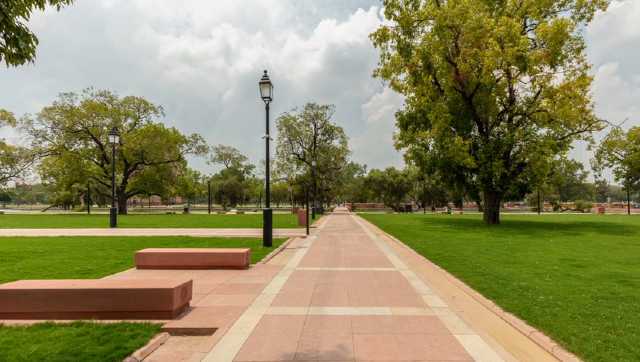 Rajpath is as green as ever

No matter how long or how loudly the government spoke about the actual revamp plan for the Rajpath area — that focused on making the public experience more comfortable and safe — protestors continued peddling their absurd scenarios of destruction. That continued even after the government released photos of partially renovated areas that showed proper pavements, lit walkways, benches for people to sit on, and even the same lampposts, bollards and chains.

Today, though the Rajpath area will only be formally opened to the public by the prime minister next week, anyone traversing that stretch can see how wrong the naysayers were. The jamun trees are all still there, the lawns are greener than before and the improvements are extensive, including pedestrian underpasses so that cross traffic remains unhindered, 16 permanent sandstone bridges and six vending zones for those famous India Gate ice cream outings.

Importantly, there are now eight below eye-level amenities blocks with toilets for men and women (including also 10 with wheelchair access) and facilities, 16,550 metres of paved and lit walkways alongside the waterbodies, down both sides of Rajpath and around India Gate — which, incidentally, can now be seen close-up with the removal of the Amar Jawan Jyoti to the National War Memorial, also in the vicinity. The beauty of Rajpath has only gone up.

Those who prematurely mourned the exeunt of the distinctive lampposts will be relieved that all 74 are back, with technology upgraded. Another 900 lights have been added, especially amid the trees, along the waterbodies, parking areas (yes, there are proper bays for vehicles now) and around India Gate. All the waterbodies (74,900 sqm of them!) have been reclad to prevent seepage and fitted with aerators and dissolved air flotation systems.

No more waterlogged and potholed lawns either as the entire area has been sloped to ensure proper drainage and all Republic Day-connected utilities have been set underground. That is why the area had been dug up, triggering those cries of doom and laments for the destruction of Lutyens’ vision. Different grass species for open and shaded portions of the lawns have been laid, and 140 new trees have been planted so green areas have actually increased. The waterbodies enhances the look of Rajpath

Most of those protesting — at least in English, written or spoken — have probably not been habitues of the Rajpath lawns, so such conveniences are irrelevant. Their childhood memories of the area — when their parents controlled the levers of government, academia and the arts — 50 years ago would clearly not be disturbed by the sensation of crushed brick grit (that had passed for Rajpath pavements till the revamp) in the sandals and chappals of the janta.

A leitmotif of the protests had been that “people” had not been consulted before embarking on the revamp. Presumably then, the people are to blame for the ugly monstrosities that came on either side of Rajpath, not the worthies who commissioned and approved them from the 1960s to the 1980s. These people also saw nothing wrong with the pitted and bald lawns of Rajpath, its frequently scum-coated waterbodies and odoriferous dark extremities.

The need for safe spaces and clean toilets for family outings sounds boringly plebeian when juxtaposed against the deeper concerns about ‘fascist’ projects that have the temerity to reimagine and change not what Lutyens had planned for Britain’s last imperial sigh but what the supposedly socialist Nehruvians had then done to it later in pursuit of temples of ‘modern’ India. From next week, new India’s verdict on the Rajpath revamp will be revealed!

The author is a freelance writer. Views expressed are personal.