The rains have finished in Arnhem Land. The humid, tropical air is cooling and the prevailing wind has swung to the north-east.

In the Kunwinjku calendar of western Arnhem Land, it is almost Yekke, the transition from the wet to dry season, a pleasant time after months of torrential rain in a good year, or overwhelming heat in a bad year. All six Kunwinjku seasons have their highlights but Yekke is perhaps the most anticipated by Bininj (Aboriginal) people of the region.

Not only does it provide relief from rain and heat but it also signals a time to start planning.

Last month more than 80 Indigenous rangers converged on Maningrida, a community on the top end coast, about 500km east of Darwin, to plan for the main event in the region’s ecological agenda: where and when to start burning.

For millennia, fire has been the prime land management tool for Indigenous people and, while it has largely been taken out the hands of Aboriginal people in southern Australia, it has been reclaimed with a vengeance up north, with substantial environmental, social and financial results.

“Every year the ranger groups come together to look at the fire scale,” says Terrah Guymula, a senior ranger at Warddeken Land Management Ltd. “We discuss how last year went; if there was any fuel left and maybe trim a little bit here or there to balance the burning.

“There are cultural reasons as well as environmental reasons that we burn. We want to protect small animals like bush rats, quolls and bandicoots because they want to live comfortably, just like us.

“We humans and our native animals have a connection – they play a big role in our ceremony, so we want to protect them and we want them to live forever so our people can see them. Protecting our rock art and anbinik trees is also very important. These are places of sanctuary where our old people used to go and places that tell our stories.” 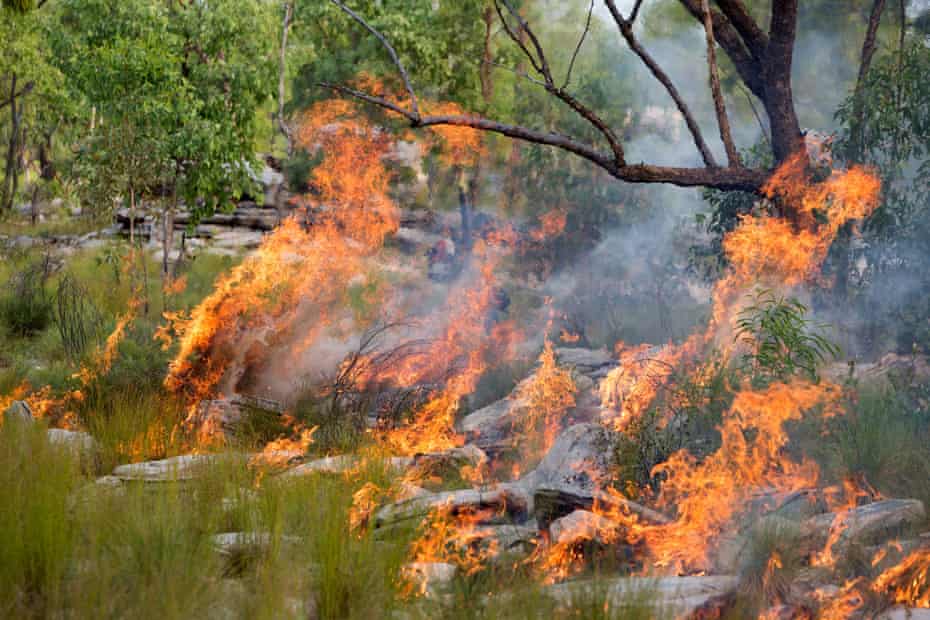 Burning is strategic and combines modern technology with traditional Aboriginal knowledge. Indigenous rangers spend many hours in helicopters early in the dry season dropping incendiaries, or they walk across country with drip torches creating patches of burned areas that will pull up a wildfire that can start late in the year, when lightning pummels the landscape. What they do is guided by satellite technology and scientific data, as well as local knowledge.

Arnhem Land covers 97,000 sq km of the top end of the Northern Territory. In 1931 the federal government declared the area an Aboriginal reserve and spent many years encouraging Aboriginal people to leave their clan territories and traditional lifestyles to live on missions and settlements administered by Europeans. Consequently, many parts were left bereft of people, or as Bininj say, “became orphan country”.

One of the worst-affected places was the Arnhem Land plateau, known as the stone country, a forbidding and ancient tableland of grey, layered sandstone deeply sliced by gorges and crevasses. The eastern and south-eastern edges of this landscape border Kakadu and Nitmiluk national parks.

The 22,000 sq km plateau, known as Kuwarddewardde by Bininj, is a treasure trove of rock art, where thousands of paintings adorn the walls and ceilings of sandstone shelters. The region’s rock paintings are the longest continuous record of human culture found anywhere in the world; images of hunters and megafauna dating back 30,000 years can be found alongside “contact” art that depicts early European activity. 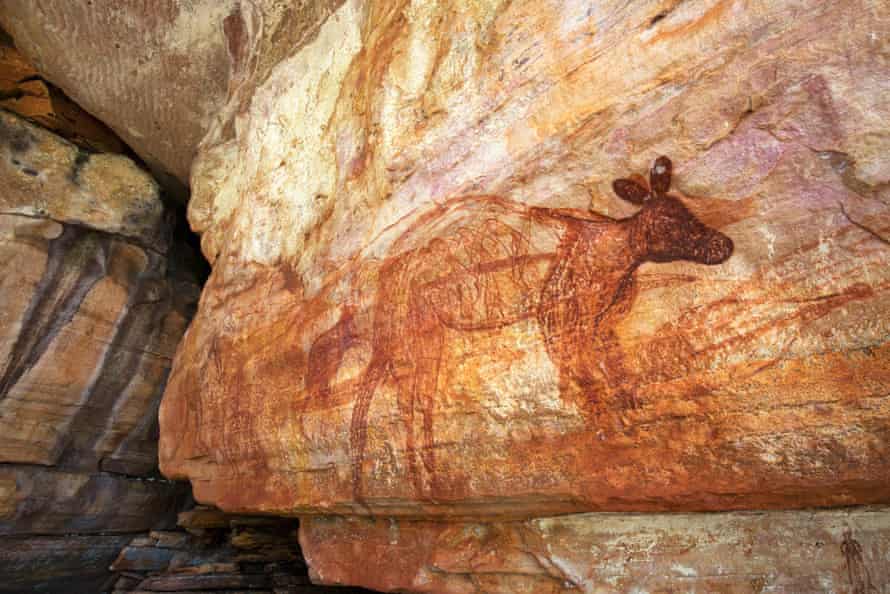 It’s home to endemic species including the black wallaroo, the chestnut-quilled rock pigeon, the white-throated grass wren and the Oenpelli python. And Kuwarddewardde is also the source of some of northern Australia’s largest rivers: the East Alligator, the Liverpool, the Daly and the Roper.

By the end of the 1940s, only a handful of clans remained on the plateau and widespread traditional land management practices had declined. Without constant care by Bininj, the plateau changed dramatically. Fuel built up and wildfires raged. Many blazes were left to burn themselves out or be doused by wet season rain.

Driven by their desire to return to country and to escape the pressures of the larger settlements, some older people went back to the bush to set up their own outstations. This was known as the “homeland movement” and began in the 1970s. Bardayal “Lofty” Nadjamerrek and his wife Mary Kalkkiwarra were among the trailblazers; they helped others and then established a settlement at Kabulwarnamyo in the stone country, clearing the country with axes and fire, and living in bush shelters and tents. 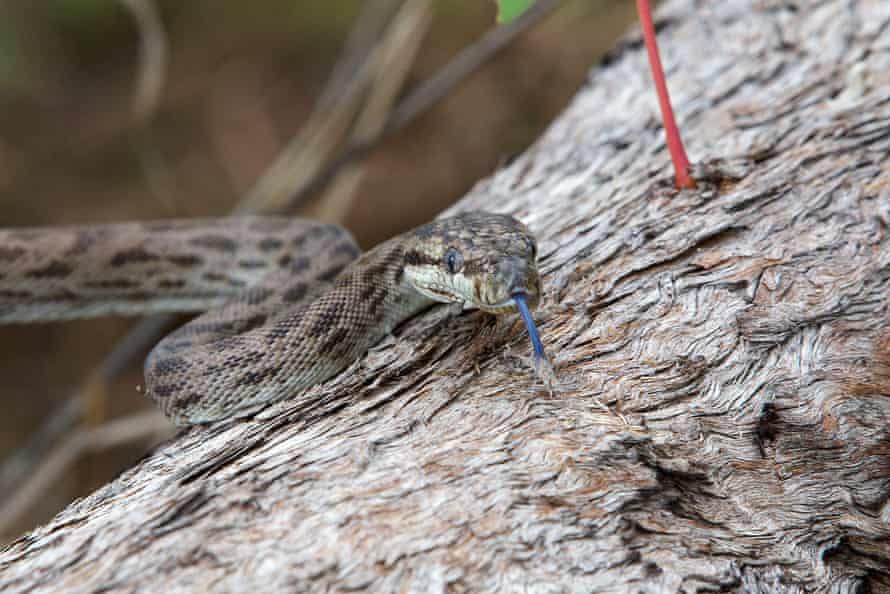 The carbon abatement achieved by Indigenous fire management offset some of the gas emissions generated by Darwin’s liquefied natural gas plant. Under the arrangement, 100,000 carbon credits were generated annually for the plant, worth more than $1m a year. The agreement runs for 17 years.

The methodology that emerged from this project became known as savanna burning and it now provides a way to measure and create carbon credits that can be sold in Australia. Savanna burning generates about 10% of Australia’s carbon credits, according to the emissions reduction fund register.

In 2009 the Warddeken Indigenous protected area was declared over the stone country along with the Djelk IPA, which covers the floodplain country from the Arnhem Land plateau to the Arafura Sea, extending west and east of Maningrida. IPAs are a preferred way for the federal government to grow the national reserve system and include Indigenous managers. 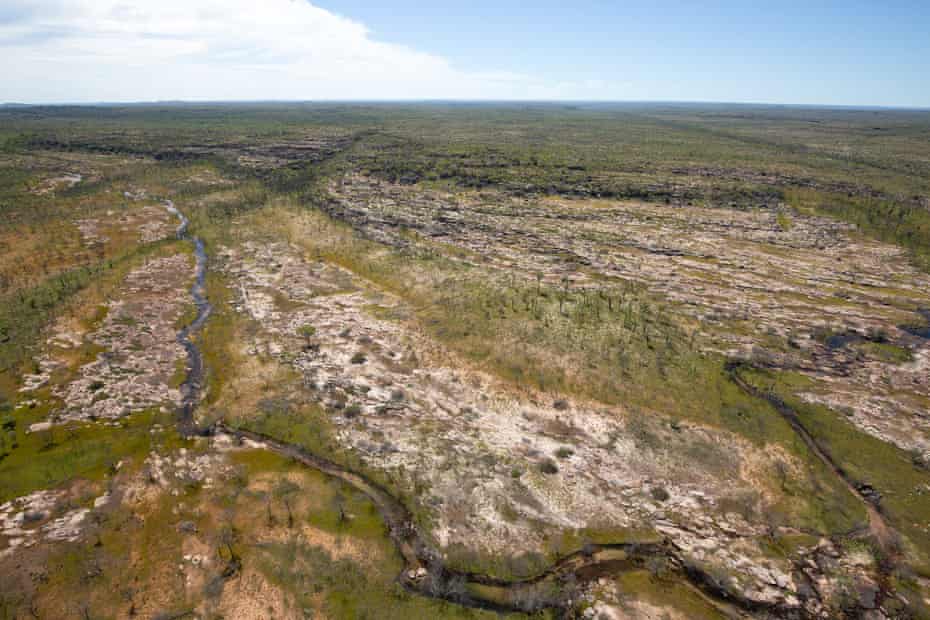 In 2015 Western Arnhem Land Fire Abatement became Arnhem Land Fire Abatement and it now supports nine Indigenous ranger groups to operate five registered eligible offset projects on Aboriginal Land Trust lands; taking the total number of carbon credits created to more than 4m. A certain number are sold via long-term contracts, including to Darwin LNG and the federal government’s emissions reduction fund, while others are sold on the voluntary market, now valued at more than $18 a tonne (one tonne equates to one carbon credit).

According to Dean Yibarbuk, the chairman of Warddeken Land Management, the concept of making money from fire was “exciting”.

“Basically, we wanted to touch base with western science,” he said. “The old people knew there would be a connection there. They knew the two systems could work together because they overlapped in many ways.

“The idea of carbon credits was unknown to us when I first started, very unknown, it just came together. We just put our hands up and decided to see where it was going to go. We knew what we were doing with fire management was working for our environment but we never thought carbon would become an industry.”

While the sale of carbon credits does not fully fund land management in Arnhem Land, it does provide groups with privately generated income that has opened up a world of possibilities, including for native animal conservation and rock art preservation projects.

Serina Namarnyilk, a stone country traditional owner, used to see mayh (small animals) everywhere when she was a child and her family regularly hunted possums and other creatures.

“We used to find all those mayh but now they are gone somewhere,” she said. “Maybe they have been eaten by cats, or maybe they eat cane toads [and die], maybe it was the wildfires that used to come across from the east and south that scared them away.” 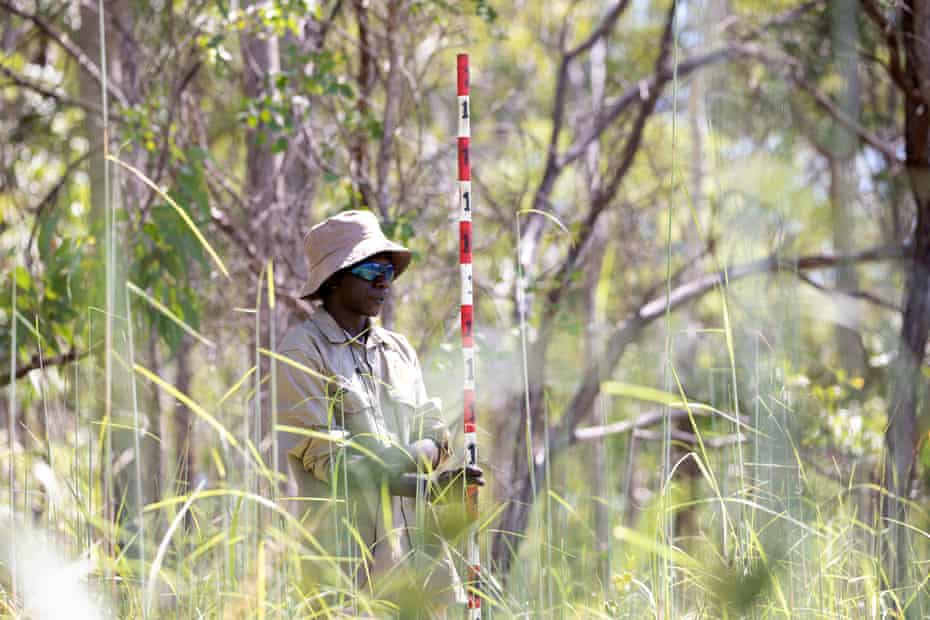 Arnhem Land is one of the last great wild areas of the world but since the 1970s many small mammals, including the northern quoll, the black-footed tree rat and the golden bandicoot, have drastically declined in northern Australia: in some areas numbers have been reduced by up to 60%. Other species have fared even worse, such as the northern hopping mouse, which is extinct on the NT mainland.

Traditional owners in the Warddeken IPA have launched their own project to understand why the animals have become less common and what can be done about it. They reinvest the income from carbon sales to employ an ecologist to help rangers undertake research using remote cameras, assessing which animals remain and how many there are at 120 locations on the rugged plateau.

Last month, before the fire meeting, the ecologist, Cara Penton, and rangers Garrett Pamkal and Frankie Nadjamerrek travelled by helicopter to a remote site in the south of the Warddeken IPA where they attached motion-sensitive cameras to sturdy stringybark trees. The cameras will be left for a minimum of five weeks, then recovered and data downloaded.

“I think a strength of this project is that the camera identification is bilingual and the work is done by Bininj,” Penton said. “It is a two-way approach between traditional knowledge and science and the information stays within Warddeken. There have been collaborations with the NT government but Warddeken owns the data. That’s the priority, to build the capacity to do this in-house.” 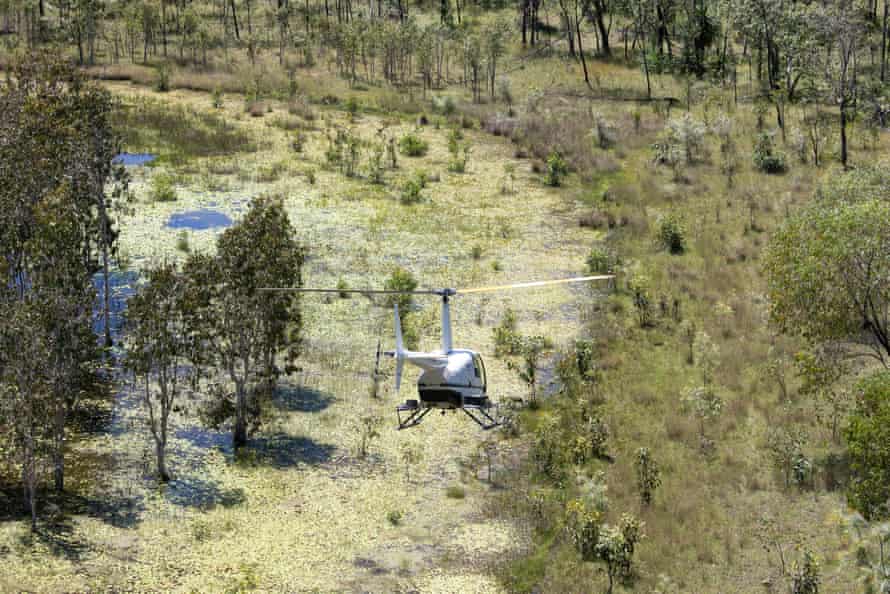 The program has been going for four years and rangers have discovered two colonies of northern quolls and two areas frequented by black-footed tree rats; they have also learned that much of the plateau is inhabited by feral cats. These discoveries have enabled them to adjust their burning programs. As data accumulates, rangers expect to be more proactive with their biodiversity programs.

‘You belong to that country’

“Fire money” was also used as seed funding for a project that saw Bininj wrest control of rock art research from academia.

Historically, this research has primarily been the domain of anthropologists and archaeologists employed by tertiary institutions with government funding; their findings, including the raw materials of traditional knowledge (interviews and documentation of conversations with traditional owners), photographic images and artefacts taken from sites, often remained with institutions. Rarely did all the data come back to a community in any form other than a research paper or government document.

Rock art research grants are largely directed through the Australian Research Council, while grants to study any aspect of rock art are rarely given to Indigenous organisations. But now Bininj have turned that model on its head.

In 2010 Aboriginal elders from the Warddeken and Djelk IPAs established the Karrkad-Kanjdji Trust to seek alternative sources of funding for land management and cultural projects. The trust approaches Australian and international philanthropic organisations and individuals. It established a $5m rock art project in Arnhem Land, with the Ian Potter Foundation the main contributor.

According to Shaun Ansell, Warddeken Land Management’s chief executive, the rock art program shows how Bininj are claiming control of their future. 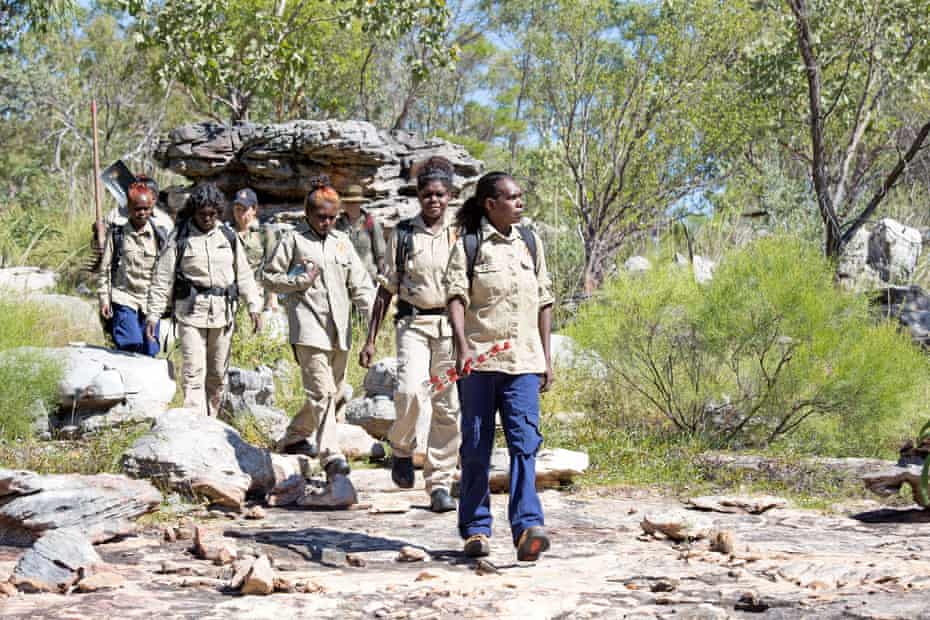 “In the past we have had to fall in line with government and bureaucratic policy,” he says. “Philanthropy allows us to connect with funders who are willing to support the vision of communities and organisations like ours.”

In 2019 Bininj established an independent school at Kabulwarnamyo and two more are planned for ranger centres at Manmoyi and Mamadawerre – education initiatives funded through fire money. Parents who work as rangers, mechanics, teachers and in administration will not have to return to larger centres to educate their kids or be separated from their families. More than 80 jobs have been created by the burning program in the Warddeken IPA, with at least 300 jobs across Arnhem Land.

The fire program has meant Arnhem Land is being rejuvenated physically and culturally.

“We are bringing young people back to the country through employment,” Terrah Guymula says. “They recognise the country, see where they come from and walk that land. A lot of people understand and many want to come back – I tell them not to be shy because you belong to that country.

“They understand their stories are here. They go there and touch the wall and see the story. It is written down, it is in the country. Once we put our foot there it comes up out of the ground. That’s how we see it as Bininj people.”