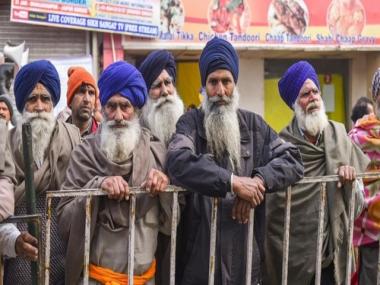 A protest in the Baghpat district of Uttar Pradesh was also vacated on Wednesday. Farmers at Baghpat accused the police of using lathicharge to disperse the agitators, but the police said that the site was cleared after talks with the farmers

Tension prevailed at the Ghazipur farmers’ protest site after the Ghaziabad administration ordered the protesting farmers to vacate the area by Thursday night. Reports said that personnel of the Rapid Action Force have been deployed at the site along with a “huge” contingent of the Uttar Pradesh Police.

However, farmers have refused to adhere to the police’s “ultimatum“, with Bharatiya Kisan Union (BKU) president Rakesh Tikait saying, “We are ready to go to jail for this but the agitation should go on.”

He also said that the farmers are “ready to face bullets if needed”, NDTV reported. “We’ll continue our sit-in protest and will not vacate site till talks with government are held. Administration has removed basic facilities including water and electricity supply. We’ll get water from our villages,” he said.

“The Supreme Court has justified the peaceful sit-in. There has been no violence on the Ghazipur border. Despite this, the government is adopting a repressive policy. It is the face of the Uttar Pradesh government,” Tikait added.

Additionally, farmer leader Jagtar Singh Bajwa was quoted by The Caravan as saying, “We are peaceful people, running this agitation peacefully. The police has tried to instigate us again and again.”

The Caravan report added that the Uttar Pradesh Police has “made its intention to vacate the site by Thursday evening clear”. Additionally, the Uttar Pradesh government has ordered all the district magistrates and senior police officials to ensure the end of all the farmers’ protests in the state.

#FarmerProtests Update | Hundreds of UP Police personnel have entered the Ghazipur site. The police has made clear its intention to clear the site this evening. Photographs by @shahidtantray and @cknotok. #Ghazipur #UPPolice pic.twitter.com/DkGH8HToDY

Reports also said that the Ghaziabad authorities have served a notice to the farmers under Section 133 of the CrPC, which is a charge of “conditional order for removal of nuisance”.

A protest in the Baghpat district of Uttar Pradesh was also vacated on Wednesday night. Protesting farmers at Baghpat accused the police of using lathicharge to disperse the agitators, but the police said that the site was cleared after talks with the farmers.

The authorities’ action comes two days after violence broke out in the National Capital during the farmers’ pre-planned tractor rally on Republic Day. Some groups of farmers broke away from the designated route approved for the rally and broke barricades to enter Delhi.

They also entered the Red Fort and hoisted their own flag. Around 400 police personnel were injured in the violence. The police has filed 22 FIRs in connection with the episode.

Earlier on Thursday, the Delhi Police issued a notice for Tikait asking why legal action should not be taken against him in connection to the violence that broke out in the course of the farmers’ tractor rally on Republic Day (Tuesday).

Reacting to the notice, Tikait was quoted as saying as saying, “I’ll read the notice. They’ve given me three days time to reply… Farmers came here as responsibility of farmer unions and they take their responsibility. We had photographed the route given to us in writing. Police barricaded it and kept the route to Delhi free.”

“Someone goes there and hoists a flag, why was no firing done? Where was police? How did he go there? Police allowed him to leave and didn’t arrest him. Nothing has been done even now. Who was the person who maligned an entire community and organisation?” he added.

Now a bunch of people have arrived at #Ghazipurborder , raising slogans and asking farmers to vacate the protest site.

UP Administration has in any case has issued an ultimatum to farmers here to clear the protest site by tonight. #FarmersProtest pic.twitter.com/XiGTyszYWZ

A similar situation arose at the Singhu border protest site, which is one of the epicentres of the two-month-long farmers’ protest. A group of people claiming to be locals staged a protest at the Singhu border, demanding that the area be vacated following the Republic Day violence in the city.

Heavy security has been deployed and “all entry points to the protest site were barricaded by security personnel, with farmers on one side and the locals on the other,” The Hindu reported.

Hindustan Times quoted the locals as saying that the farmers “insulted the Tricolour during the Republic Day tractor parade”. The report added, “Many locals, part of anti-farmer protests, also said that they are facing hardships due to the farmers’ agitation and want the roads to be cleared. Protesters had gathered from around 10 nearby villages.”

A farmers’ protest against three farm laws of the Centre, which was being held on a national highway in Uttar Pradesh’s Baghpat district since 19 December 2020, has come to an end with the protesters alleging use of force by police.

The police, however, claimed that the matter was resolved through deliberations and the protesting farmers were sent home on Wednesday night.

The protesters have alleged that police personnel entered their tents late on Wednesday night, used force on the sleeping farmers and chased them away.

Thamba Chaudhary, Brijpal Singh, Baljaur Singh Arya, Vikram Singh and other farmers who took part in the protest on Thursday said their agitation against the farm laws was going on on one side of the national highway, PTI reported.

Late on Wednesday night, a large number of police personnel entered their tents, resorted to lathicharge on the sleeping farmers and chased them away, they told reporters.

Charging the police with adopting repressive measures, they claimed that their tents were uprooted. About 40 farmers were present at the spot at that time.

Refuting the charges, Circle Officer Alok Singh said the protest ended after deliberations with the farmers and the police did not resort to lathicharge on the protesters.

“Whatever happened was in agreement with those present there,” he said, adding that the protesting farmers returned home peacefully.

The Delhi Police’s Special Cell will investigate the “conspiracy” and “criminal designs” behind the violence during the farmers’ tractor parade on 26 January, PTI reported.

The Delhi Police claimed that there was a “pre-conceived” and “well coordinated” plan to break the agreement arrived at with farmer leaders to bring international embarrassment for the government on Republic Day.

“The Special Cell is investigating the conspiracy and criminal designs behind these unfortunate events of 26 January. A preliminary assessment suggests there was a pre-conceived and well coordinated plan to break the agreement reached between Delhi Police and the leaders of farmers organisations, to indulge in violent confrontation with the security forces, to breach the sanctity of iconic and historical structures and monuments and to create an international embarrassment for the government on the occasion of the Republic Day,” the police said in a statement.

It further said a criminal case has been registered and is being investigated under provisions of the Unlawful Activities (Prevention) Act (UAPA) and sections of IPC dealing with sedition.

“The role and conduct of organisations and individuals based in India as well as those out of the country is being probed. Investigation is in progress and further details will be communicated in due course,” it added.

The Delhi Police also issued lookout notices against farmer leaders named in an FIR in connection with the Republic Day violence.

It asked the farmer leaders to submit their response within three days, explaining why legal action should not be taken against them as they did not follow conditions set for the parade.

PTI quoted sources as saying that around nine crack teams have been formed to locate all the culprits.

The farmer unions protesting against the three farm laws alleged that there was a conspiracy behind the violence.

Police have named 37 farmer leaders, including Rakesh Tikait, Yogendra Yadav and Medha Patkar, in the FIR that mentioned charges of attempt to murder, rioting and criminal conspiracy.

Additionally, the Delhi Police has registered a sedition case in connection with the violence at the Red Fort.

According to a senior police officer, a case under section 124A (sedition) of the Indian Penal Code (IPC) has been registered and the incident is being investigated.

Meanwhile, Delhi border points remained under heavy police deployment on Thursday in the aftermath of the violence. Security personnel have also been deployed at the Red Fort.

Thousands of farmers, mostly from Punjab, Haryana and western Uttar Pradesh, have been camping at several border points, demanding a complete repeal of the three farm laws.