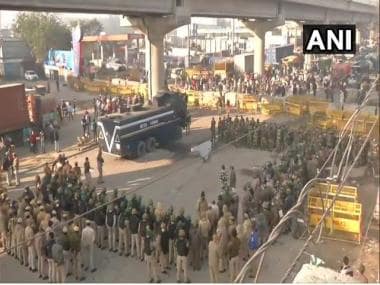 Farmers Protest LIVE Updates: Farmers gathered at the approved protest site at the Nirankari ground in Burari, Delhi on Saturday. They said that their protests will continue as long as the Centre’s farm laws are not rolled back

Farmers Protest LATEST Updates: Farmers gathered at the approved protest site at the Nirankari ground in Burari, Delhi on Saturday. They said that their protests will continue as long as the Centre’s farm laws are not rolled back.

Thousands of farmers who had gathered near the border entry point at Tikri were allowed to enter Delhi on Friday after hours of a standoff that saw Delhi Police using teargas shells, water cannons, and multi-layer barriers to block the protesters. In response, farmers broke barricades at some places and pelted stones in their determination to push through the police blockade.

Farmers from Punjab, Haryana, Uttar Pradesh, and other states began the ‘Delhi Chalo‘ march on Thursday to hold a peaceful protest against the Centres new farm laws at a north Delhi ground

Farmers gathered at the Tikri border were escorted by police personnel amid tight security around 3 pm and taken towards the Nirankari Ground, one of the biggest in the city.

“After holding a discussion with farmer leaders, the protesting farmers have been permitted inside Delhi to hold a peaceful protest at Nirankari Ground in Burari. We appeal to all farmers to maintain peace,” said Delhi Police PRO Eish Singhal.

This helped defuse some of the tension building up since Friday morning at Delhi’s borders. But those gathered at the Singhu border, one of the main routes used to access the city from Punjab, had not entered the city till evening.

The protest also witnessed one casualty when a tractor-trolley in which a group of farmers were travelling was hit by a truck in Haryana’s Bhiwani district, PTI quoted police as saying.

In this accident, Tanna Singh, a farmer from Mansa in Punjab, died on the spot while two others were injured. The police immediately rushed the injured to the Bhiwani Civil Hospital for treatment, the spokesperson added.

Earlier on Friday, clashes broke out at multiple places and Delhi’s borders resembled a virtual battle zone with restless crowds of farmers, mostly from Punjab and Haryana, milling around and a sea of police personnel keeping them at bay. Drones circled the air and plumes of smoke from teargas shells could be seen from far.

Beyond the border points, the tension spilled over on highways where groups of farmers squatted on the road, and stood in trucks and tractors, waiting impatiently to make their way into the National Capital.

At the Singhu border, multi-layer barricading, including sand-laden trucks and water cannons, was put up to block the farmers. Delhi Police used teargas to disperse farmers who had reached Singhu.

#NewsAlert | Constant tear gas shells being fired at Singhu border to stop farmers from entering the national capital.@Zebaism with the details.

At Tikri, a few kilometres away, some farmers used a tractor to pull away a truck placed as a barricade to prevent them from entering the city. Water cannons were used against the farmers there as well.

Hundreds of farmers from western Uttar Pradesh were also moving towards Delhi from Greater Noida to join the protest, PTI reported.

The Bharatiya Kisan Union had given the call to farmers from the region, including Meerut, Muzaffarnagar, and Baghpat, to come together for the ‘Delhi Chalo’ march.

“We have started our onward movement. But our route to Delhi is yet to be decided by our union leaders, BKU state spokesperson Pawan Khatana told PTI.

Delhi Police, which had expressed concern over the pandemic situation in the city, had sought permission from the AAP government to use the city’s nine stadiums as temporary jails for farmers arrested or detained, however, this was denied.

In a letter to the principal home secretary, Jain said the Central Government should accept the demands of farmers, adding that putting farmers in jails was not a solution.

As the farmers dug in their heels, police made announcements over loudspeakers asking them to retreat.

“We will enter Delhi. We will get these anti-farmer laws repealed. We were welcomed at the National Capital by teargas shells lobbed by Delhi police,” a farmer from Fatehgarh Sahib in Punjab who was among those who managed to reach the Singhu border told PTI.

Some farmers who had reached close to the Singhu border said they had taken night halts at various points and broken police barriers in Panipat, Haryana, about 100 kilometres from Delhi. While a group of farmers from Punjab were the first to reach there, some farmers from Haryana joined them later.

A farmer who had reached the Haryana-Delhi border point in Sonipat asked why they were stopped.

“Don’t we have a democratic right to protest in a peaceful manner? Farmers meet the food needs of the nation, but today the Centre is behaving as if we are terrorists and has put thousands of security personnel to stop our peaceful march,” he said.

As the day progressed, so did the chaos on the roads leading to Delhi and at its border points, PTI reported.

Checking was also intensified at the city’s entryways, including at the Delhi-Gurgaon border, leading to massive jams. Authorities in Haryana imposed prohibitory orders under Section 144 of the CrPC in several parts to prevent the assembly of the protesters.

For those needing to commute from Delhi to NCR areas or from the suburbs to the city for work or other reasons, it was a tough day.

Delhi Metro authorities had earlier announced that services from the neighbouring cities will remain suspended on Friday.

The Aam Aadmi Party and Congress were among the Opposition parties who had extended their support to the farmers protesting against the three farm laws.

AAP legislators on Friday called the Centre’s new laws as “dark laws” and said they must be withdrawn.

They also said that the farmers, mainly from Punjab, reached Delhi after “much struggle”, facing teargas shells, water canons, and lathi-charge by the police at various border points.

It was later that the farmers were allowed by authorities to enter Delhi and hold peaceful protests at the Nirankari ground in Burari.

AAP Burari MLA Sanjeev Jha, who along with party volunteers had gone to the Singhu border to receive farmers, earlier in the day met Delhi Police officials and asked them to ensure farmers do not face any hardships during their demonstration at the Nirankari ground in his constituency.

Jha said that he also met farmers’ representatives and assured them that he will try his best to ensure farmers do not face any kind of problems. AAP spokesperson and Rajinder Nagar MLA Raghav Chadha welcomed the farmers and said the party will take care of all necessary arrangements.

“We welcome farmers to Delhi. We will take care of all the farmers and make necessary arrangements for them. Farmers you fearlessly raise your voice, we stand with you,” Chadha said.

Rajya Sabha MP Sanjay Singh also extended his support to the farmers. “The farmers have been allowed to protest in Delhi after so much struggle. They were lathi-charged, teargas was used on them and when all means of the government failed then they were given permission. Why has the government pushed the meeting date till 3 3 December? The farmers are struggling now why wait till then,” he said.

Meanwhile, Congress leader Rahul Gandhi slammed Prime Minister Narendra Modi and said no government in the world can stop farmers from fighting the “battle of truth”.

In a tweet in Hindi, Gandhi said the prime minister should remember that whenever arrogance takes on truth, it gets defeated. “The Modi government will have to agree to the demands of the farmers and take back the black laws. This is just the beginning!” he tweeted with #IamWithFarmers.

Punjab chief minister Amarinder Singh welcomed the Union government’s decision to allow the farmers to enter Delhi to exercise their democratic right to protest. “They should also now initiate immediate talks to address farmers’ concerns on the #FarmLaws and resolve the simmering issue,” he said on Twitter.

I welcome Centre’s decision to allow farmers to enter Delhi to exercise their democratic right to protest. They should also now initiate immediate talks to address farmers’ concerns on the #FarmLaws and resolve the simmering issue. pic.twitter.com/9oJk296pOZ

The farmers are demanding the repeal of the new farm laws, which, they said, should be replaced with another set of legislations framed after wider consultation with the stakeholders. They also want a guarantee on minimum support prices.

Lawmakers seek to return National Guard soldiers to the Capitol after they were relocated to sleep in a parking garage.

Martin Shkreli and former journalist are back on speaking terms