Farmers’ protest LIVE Updates: The Supreme court is scheduled to hear a plea against the gathering of agitating farmers at the Delhi borders 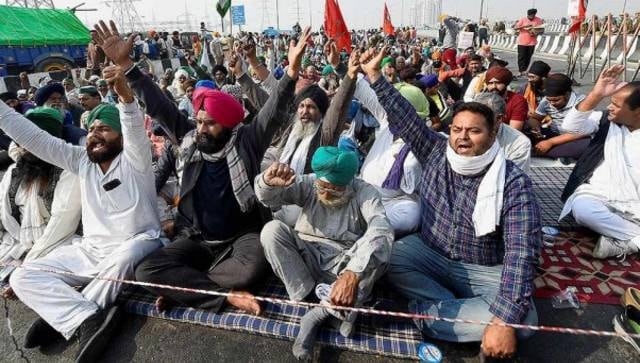 Farmers shout slogans during their protest against the new farm laws. PTI

Farmers’ protest LATEST Updates: Leaders of farmers’ bodies will observe a hunger strike on Monday and hold demonstrations across the country, two days ahead of the scheduled hearing of a plea against their gathering at the Delhi border in protest against farm laws.

In Punjab, farmer unions will protest on Monday outside the offices of deputy commissioners of all districts, Reliance Group shopping malls and fuel pumps, and outside the houses of BJP functionaries. Around 400 police personnel, including an RAF company, have been deployed by Rewari police to stop more farmers marching towards Delhi.

The hunger strike, which will be observed from 8 am till 5 pm, received the support of Delhi Chief Minister Arvind Kejriwal. “I will hold a one-day fast tomorrow in support of farmers’ protests. I appeal to AAP volunteers to join in. Centre should immediately accept all demands of farmers protesting the laws and bring a bill to guarantee MSP (minimum support price),” he said.

Punjab Chief Minister Amarinder Singh said the Kejriwal government had “backstabbed” the farmers by “shamelessly” notifying one of the farm laws on 23 November. “And now, they are indulging in theatrics by announcing that they would be sitting on a fast in support of the farmers’ hunger strike on Monday,” he said.

The Singhu border, where farmers have gathered since late November, is likely to witness a logjam with 10,000 protesters expected to join those at the protest site, The Times of India reported. Around 1.45 pm on Sunday, traffic on the Delhi-Jaipur national highway was stalled at Jaisingh Khera as hundreds of farmers from Rajasthan were stopped by police from going further. The border was opened for vehicles coming from Delhi after 3.5 hours, according to officials.

While Prime Minister Narendra Modi said reforms will “help draw investment to agriculture”, Union Minister Narendra Singh Tomar said the opposition parties ran a propaganda against the new farm laws. “When reforms are undertaken it will benefit farmers in the long run. But in the short run, some may face difficulty. We know we can achieve no gain without difficulties,” the Union Minister, who has held several round of negotiations with farmers’ representatives, told PTI.

On Sunday, the Delhi-Jaipur highway was closed for a few hours as farmers from Rajasthan and Haryana started marching towards the national capital. Over 4,000 policemen were deployed in Gurugran and Faridabad to stop the march.

The Bharatiya Kisan Union (Bhanu) faction saw discord on Sunday over the opening of a highway from Noida to Delhi, a day after Thakur Bhanu Pratap Singh, the president of the organisation, met with Defence Minister Rajnath Singh. The UP unit chief of the BKU (Bhanu) Yogesh Pratap, who was holding a sit-in protest on the Chilla road for the last 12 days, disagreed with the decision.

This is the second nationwide protest in less than a week after highways were blocked last Tuesday as a part a countrywide shutdown call backed by opposition parties and trade unions. Despite several round of talks with the government, farmers have said the protests will continue till the new farm laws are scrapped.

Choudhary on Sunday said the government will soon decide a date and call union leaders for the next round of talks. The previous five rounds of talks between the central government and representatives of 40 farmer unions remained inconclusive. The sixth round of talks did not take place after farmer leaders rejected the government’s draft proposal to amend certain provisions of the farm laws and declined to participate in the meeting.

Nine-year-old Manipur climate activist Licypriya Kangujam was at the Singhu border to back the stir. “Our farmers are the biggest victims of climate change. The government should solve the ongoing farmer crisis at the earliest,” she said. Swaraj India chief Yogendra Yadav and activist Medha Patkar were among those who reached the site at Shahjahanpur where Haryana police have blocked protesters from Rajasthan.