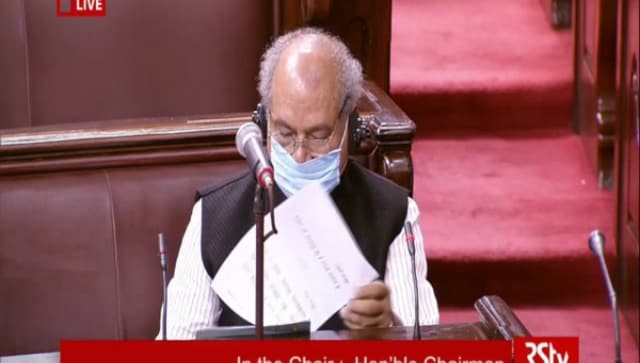 Narendra Singh Tomar in the Rajya Sabha on Sunday. ANI

New Delhi: Agriculture minister Narendra Singh Tomar on Sunday said minimum price or MSP based procurement of agriculture crops from farmers will continue and is not related to the farm bills that seek to give cultivators freedom to market their produce.

Days after their passage in the Lok Sabha, Tomar introduced the Farmer”s Produce Trade and Commerce (Promotion and Facilitation) Bill, 2020, and the Farmers (Empowerment and Protection) Agreement of Price Assurance and Farm Services Bill, 2020 in the Rajya Sabha.

The bills are facing staunch Opposition from farmer bodies as well as from within the ruling coalition. Harsimrat Kaur Badal, the food processing minister from the Shiromani Akali Dal party, resigned from the government last week.

KK Ragesh (CPI), Derek O’Brien (TMC), Trichi Siva (DMK) and K C Venugopal (Congress) moved resolutions for sending the two bills to a select committee of the House for consideration before they are taken up for passage.

Speaking at the introduction, Tomar said the two bills are “historic and will bring a revolutionary change in farmers’ lives”.

They seek to remove restrictions on marketing farm products and allow cultivators to engage with private companies to sell their crops.

“Farmers will get the freedom to sell their produce at any place and person of their choice,” he said adding the bills were brought after feedback from stakeholders that the Agricultural Produce Market Committee (APMC) were not doing justice to farmers.

The bills seek to bring competition and ensure fair price to farmers, he said.

“There are misconceptions being spread about the minimum support price (MSP). MSP is the government”s administrative decision and not linked to the bills. MSP based procurement was there in the country, is there, and will continue,” he said.

Under MSP, the government guarantees the procurement of crops such as wheat and paddy at minimum prices from farmers.

Opposition parties as well as SAD feel the bills are the first step toward removing the MSP which will force the farmers to make distress sales to private companies.

Ragesh said the country is witnessing massive agitation by farmers over the bills. “I request the minister and the government to see the wrath of farmers and withdraw these orders and bills.”

The agri bills, he said, are being dubbed as COVID relief package for farmers but in effect, these are “package for the corporates”.

Agriculture, he said, is a state subject and the union government was “snatching powers of the states”.

He said the bills will be throwing farmers at the mercy of the corporates.

Farmers do not have bargaining power and they cannot enter into a contract with corporates from a position of strength, he said.

Opponents of the bills see them as an attempt to dilute the country”s public procurement system and lead to exploitation by private companies.

The Farmers’ Produce Trade and Commerce (Promotion and Facilitation) Bill, 2020 seeks to give freedom to farmers to sell their produce outside the notified APMC market yards (mandis). This, the government says, is aimed at facilitating remunerative prices through competitive alternative trading channels.

Farmers will not be charged any cess or levy for sale of their produce under this Act, according to the government.

It will open more choices for farmers, reduce marketing costs, and help them get better prices. It will also help farmers of regions with surplus produce to get better prices and consumers in areas with shortages at lower prices.

The Farmers (Empowerment and Protection) Agreement of Price Assurance and Farm Services Bill, 2020 seeks to give farmers the right to enter into a contract with agribusiness firms, processors, wholesalers, exporters, or large retailers for the sale of future farming produce at a pre-agreed price.

It seeks to transfer the risk of market unpredictability from farmers to sponsors.

Tomar said this legislation guarantees cultivators price they negotiate at the time of sowing itself.

A third bill, the Essential Commodities (Amendment) Bill, 2020 that seeks to remove commodities like cereals, pulses, oilseeds, onion, and potatoes from the list of essential commodities and will do away with the imposition of stock holding limits, is to be moved separately.