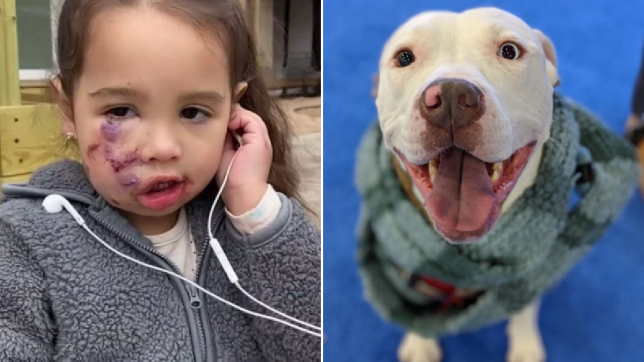 Kingston the pit bull, right, has been put down after mauling three year-old Ronin Waldroup, left, while posing as a fake service dog (Pictures: ABC13/John Kovach)

A fake service dog that mauled a toddler and ripped her cheek open has been euthanized. Kingston the pit bull was destroyed last week, almost a month after he attacked Ronin Waldroup at the Loose Caboose restaurant in Spring, Texas, while wearing a service animal vest.

The bloodthirsty animal’s fate was sealed following several days of court hearings which culminated in a justice of the peace ordering Kingston’s death. His owner Jennifer Romano did not appeal the ruling, and Kingston was put to sleep shortly afterwards.

A spokesman for Ronin’s family told of their relief at the news Kingston had been killed. They said: ‘The family can finally breathe knowing this dog won’t be back out in restaurants wearing vests, mauling more people. We won a small part of the battle today and we’re preparing to win the war.

‘Jennifer Romano’s blatant disregard for the law and public safety needs to be brought to light and businesses need to know how to look out for other people like her.’

They also called on business owners to familiarize themselves with the Americans with Disabilities Act (ADA) to try and weed out other dangerous dogs masquerading as service animals.

Ronin’s mother Cleveratta Gordon-Waldroup was among those who gave evidence during the hearing, insisting Kingston could not be rehabilitated after biting the toddler

She said: ‘I don’t want anyone else to go through this. We are standing firm on putting Kingston down.’

The Waldroups also cited a previous bite inflicted on one of Romano’s friends by Kingston as further evidence of the dog’s instability, KTRK reported.

Romano was filmed fleeing the scene after Kingston bit Ronin, despite the youngster’s dad James Waldroup asking her to remain at the scene until police arrived.

Ronin’s cheek was badly injured in the attack, although doctors think her wounds will heal completely.

The Waldroups say they also plan to pursue civil action against Romano over the bite.