Giuliani, who also had his law practice in New York suspended last month, was dealt a fresh blow by a US appeals court on Wednesday which ordered him to stop working in the capital.

The two rulings come after Giuliani claimed, without evidence, that the 2020 presidential election was influenced by fraud and ballot-rigging.

Giuliani led Trump’s legal challenge after his election defeat and the suspension of his licence to practice law in Washington is a direct result of the suspension in New York.

A court in the Big Apple ruled Giuliani had made ‘demonstrably false and misleading statements to courts, lawmakers and the public’ in trying to overturn the results of the 2020 elections in favor of Trump.

In issuing its order on Wednesday, the District of Columbia court of appeals cited the suspension of Giuliani’s New York law license. The court found he had lied in arguing that the election was stolen.

Giuliani’s license has been revoked while disciplinary action over his practices are being considered.

The New York appellate division, citing the 6 January riot at the US Capitol, said Giuliani‘s eagerness to trumpet false claims threatened the public interest and could erode public confidence in the election process. 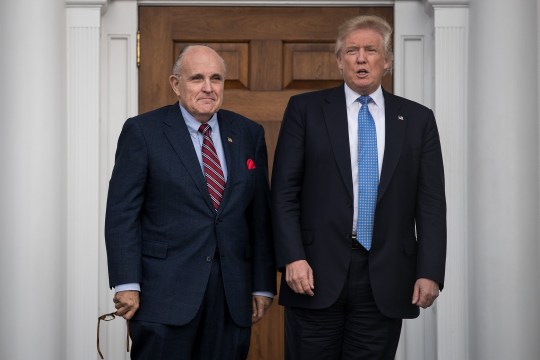 After the 24 June ruling, Giuliani said he would go to court to fight the New York suspension.

In the weeks after the 2020 election, the former president’s lawyer claimed rampant fraud during the presidential election without proof.

Speaking after the suspension in New York Giuliani’s lawyers, Barry Kamins and John Leventhal, said in a statement obtained by The New York Times they were disappointed that their client’s license was suspended before a hearing was held on the allegations.

‘This is unprecedented as we believe that our client does not pose a present danger to the public interest,’ they stated.

‘We believe that once the issues are fully explored at a hearing, Mr. Giuliani will be reinstated as a valued member of the legal profession that he has served so well in his many capacities for so many years.’

Giuliani was admitted to the New York state bar in 1969 and worked in the Department of Justice during the Reagan administration. He became United States Attorney in Manhattan in 1983. His accomplished career included becoming New York City mayor and guiding the city into recovery from the 9/11 terrorist attacks.

However, Giuliani ran into trouble while representing Trump. In April, FBI agents raided Giuliani’s home in Manhattan, seizing computers and cell phones, as part of an investigation into his dealings with Ukraine leading up to the election. Prosecutors are looking into whether Giuliani illegally lobbied the Trump administration on behalf of Ukrainian officials he asked to dig up dirt on then-presidential candidate Joe Biden.

Giuliani, who is currently not Trump’s lawyer, has denied wrongdoing.