US travellers will soon return to European destinations (Picture: PA)

Travellers from the United States will be able to return to top European destinations like Spain and Italy at the end of the month.

European Union member states have agreed to lift coronavirus travel restrictions from June 27, allowing people from eight countries and territories to enter the bloc, according to reports this morning.

As well as the US, the whitelist of places exempted from the travel ban will be expanded to include Albania, North Macedonia, Serbia, Lebanon, Taiwan, Macau and Hong Kong, according to diplomats.

It means that non-essential travel between the EU and whitelist areas is allowed again, after a months-long ban.

Some EU states had already started opening up their borders to US residents but the move by the entire bloc will provide a further boost to the ailing travel industry.

Individual countries can still choose to require travellers from the whitelist areas to undergo Covid-19 testing or to observe periods in quarantine.

It’s not known when the US will reciprocate and allow EU citizens to return to its shores.

Because of the pandemic, the EU closed its external borders in March 2020 for non-essential travel, and for the past year has drawn up a regularly updated list of non-member states whose residents are allowed to travel to Europe. 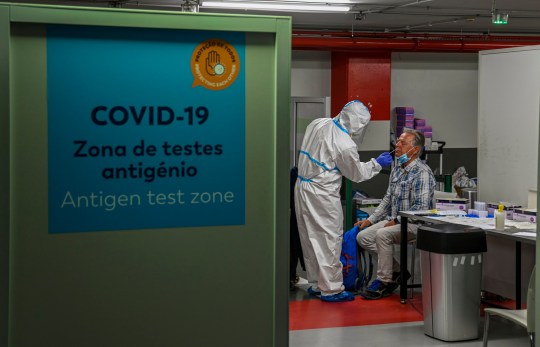 A test centre is Lisbon, Portugal is helping to keep cases out of the country (Picture: Getty)

Countries can be included if they have recorded fewer than 75 cases of Covid-19 per 100,000 inhabitants over the past 14 days. In the United States this rate is 73.9, according to figures from the European Centre for Disease Control and Prevention (ECDC).

Travel within the EU is also opening up next month, with anyone who has been vaccinated or recently recovered from the virus allowed to travel between the 27 member states.

In contrast, travel between the EU and UK is looking less and less likely due to the rise of the Delta variant first discovered in India.

The UK has become the worst affected place in Europe for Covid again due to the rapid spread of infections – while cases are plummeting elsewhere.

News that the United States is to be added to the approved list came one day after Brussels and Washington renewed friendlier ties at a summit between President Joe Biden and EU chiefs Ursula von der Leyen and Charles Michel.