LISBON—In this soccer-crazed capital of a soccer-obsessed nation, the stadiums are full again. Portugal, a country ravaged earlier in the year by the Delta variant of the coronavirus, now has the highest Covid-19 vaccination rate in Europe and offers a glimpse of a country trying to come to grips with what is increasingly looking like an endemic virus.

Tens of thousands of screaming soccer fans crammed into the Estadio da Luz here Wednesday to watch hometown favorites Benfica take on Bayern Munich. They amassed on the subway to the stadium, at the entrance as officials patted them down and, after the game, at food trucks where they downed sandwiches and beer as they tried to forget the drubbing their team had just received.

The government recently lifted a 30% capacity limit at stadiums imposed to control Covid-19. But things haven’t returned to what they were: Fans need a certificate showing they are vaccinated, recently recovered from the disease or tested negative. Masks are obligatory throughout stadiums.

Close to 100% of people over the age of 50 have received at least one vaccine dose, according to the Portuguese government. For those between the ages of 25 and 49 it is 95% and from 12 to 17 it is 88%. Some 89% of Portugal’s entire population of 10 million has had at least one vaccine dose, not far behind the rate in the world-leading United Arab Emirates, compared with 65% in the U.S. and 73% in the U.K., according to Oxford University’s Our World in Data.

On Oct. 1, Portugal ditched most of its Covid-containment rules, but in many ways life in Lisbon is a throwback to the deepest days of the pandemic. Hand pumps dispensing disinfectant gel are ubiquitous and some churches still rope off seats to ensure social distancing even though it is no longer obligatory. The Covid-19 certificate is required at large events and masks are still mandatory on public transportation, in schools for students 10 and older, and for employees in shops, restaurants and bars.

Portugal dropped most of its coronavirus restrictions on Oct. 1. 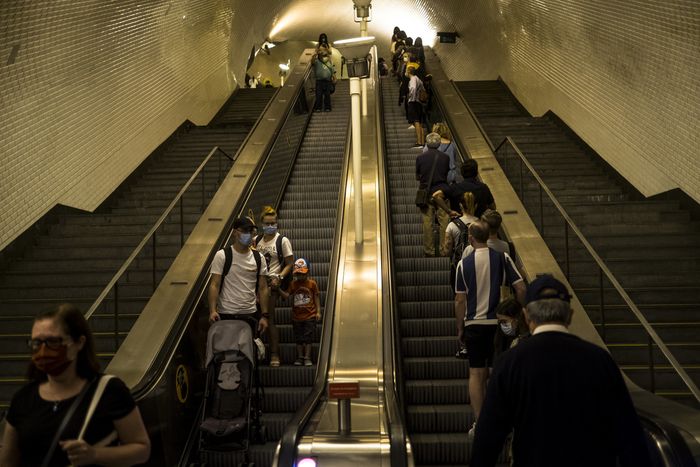 Masks are still mandatory on Lisbon’s subway and other public transportation.

At the same time, subways are full. Lisbon’s fleet of rickshaw taxis, known by the Thai term tuk-tuk, whisk tourists along the narrow streets of the city’s old town. Nightlife pulsates in various parts of the city all week, tram lines popular with tourists skip stops because they are bursting with passengers and almost every day finds a new massive cruise ship docked at the harbor.

Portugal’s cautious return to normality, despite a vaccination rate that is the envy of public-health officials around the world, is being watched as a possible way forward for other countries as their vaccinations inch higher and they contemplate when to ditch their remaining restrictions. The Portuguese approach contrasts with the U.K.’s, where a combination of fewer vaccinated people and almost no restrictions has led to a surge in infections and a rising death rate.

Soccer stadiums in Portugal can operate at full capacity, but spectators must show that they are vaccinated, recently recovered from Covid-19 or tested negative.

Benfica fans watching the Bayern Munich match at a food stall outside the stadium. Benfica lost 4-0.

“I need tourists, otherwise I have no business, but I look at the infection numbers every day and if it goes up even a little bit I get nervous,” said Paula Marques, who runs a souvenir shop in Lisbon. “I hope the pandemic is a thing of the past here in Portugal, but to be honest I still worry a little bit about what will happen as it gets colder.”

Portugal got through the first wave of the pandemic in early 2020 relatively unscathed. But a steep rise in cases in November last year and then a savage surge in January shattered the illusion some here had that this small country tucked away in the southwest corner of Europe could escape the worst of the pandemic. 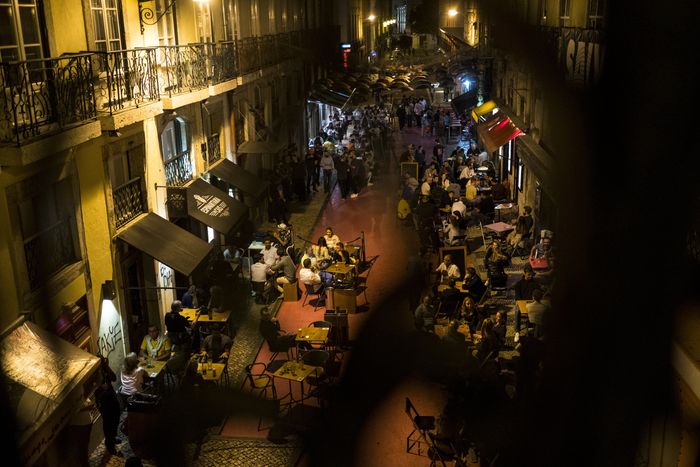 At the peak in January, an average of about 290 people were dying a day in Portugal from the virus. Adjusted for population, that equates to more than 9,500 in the U.S. The worst daily average over a week in the U.S. never topped 3,500 deaths.

Maria Mota, executive director of Lisbon’s Institute of Molecular Medicine, has one image indelibly imprinted in her memory from that period that still makes her jittery. Working late one evening at her lab, from her window she counted 52 ambulances lined up outside the emergency room of the country’s largest hospital waiting to drop off patients.

Portugal is now in a “transitional period” that likely will delineate the pandemic from the new reality of endemic Covid, said Dr. Mota. With memories of the trauma of January still fresh in the collective Portuguese memory and with question marks remaining over what will happen as the cold returns and more life resumes indoors, most people are likely to proceed cautiously, she said.

Cruise ships regularly dock at the harbor in Lisbon.

People meeting along the Tagus River in Lisbon last week.

Tourists at sunset last week along the Tagus River in Lisbon.

“Nobody will ever forget this past January, but now Covid is endemic and we need to learn to live with the virus,” said Dr. Mota. “Almost the whole population is vaccinated here and the virus still circulates, showing it won’t go away.”

As in other countries with a large proportion of the population vaccinated, a stubborn persistence of infections in Portugal hasn’t led to a significant increase in the rate of hospitalizations or deaths.

“Things are getting better, but it’s slow,” said Miguel Campos, who drives tourists around Lisbon in a tuk-tuk. “We are taking baby steps. We have a mix of optimism and hope that this return to normal will continue.” 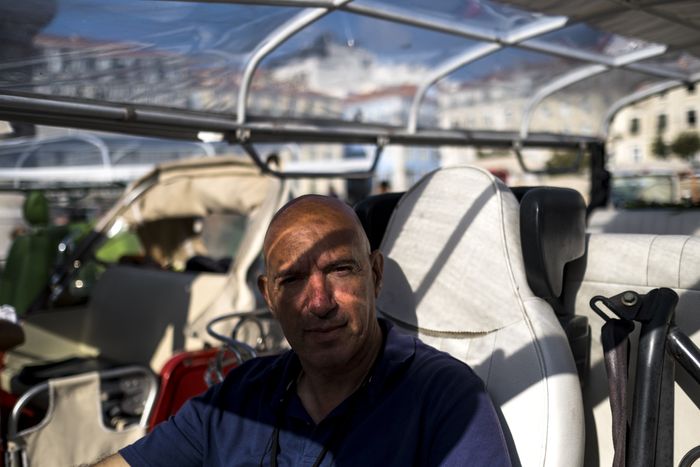 ’Things are getting better, but it’s slow,’ said rickshaw taxi driver Miguel Campos, of the Covid-19 situation in Portugal. 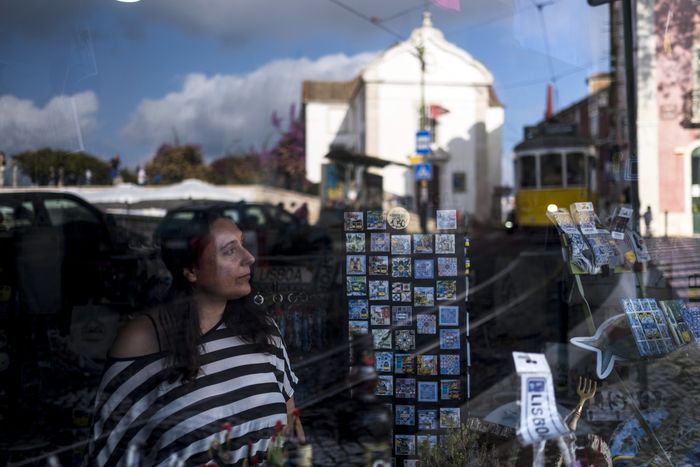 Paula Marques, who owns a souvenir shop in Lisbon, said her business relies on tourism and that she worries infections might rise when the weather gets colder.

Before the pandemic there were 800 rickshaw taxi drivers in Lisbon, but now only about 200 work during the week and 500 on weekends, said Valentim Gaspar, another rickshaw taxi driver. For now, the balance between drivers and tourists makes it possible to earn a decent living, he said.

The Portuguese almost universally attribute their vaccination success to Henrique Gouveia e Melo, an ex-submarine commander brought on to run the inoculation drive after a shaky start. He projected confidence and tapped into the population’s generally favorable attitudes to vaccinations, according to public-health experts. The vaccine rollout began in January just as the worst of the pandemic peaked in Portugal, providing a clear incentive for anybody who might have been unsure about getting vaccinated.

On a soccer-mad continent, Portugal stands out for its dedication to the sport, making the return to full capacity in stadiums all the more symbolic for many people. Spain, which also has one of the highest vaccination rates in Europe, recently returned to full capacity at its stadiums, but food still can’t be sold. Italy this month increased stadium capacity to 75% from 50%. In most of Germany, there are still limits on capacity.

“It’s time to open everything up because if somebody hasn’t gotten vaccinated at this point, then they aren’t going to get vaccinated,” said Hugo Vale, a 32-year-old engineer, as he drank beer with friends outside the stadium ahead of the Benfica-Bayern game. 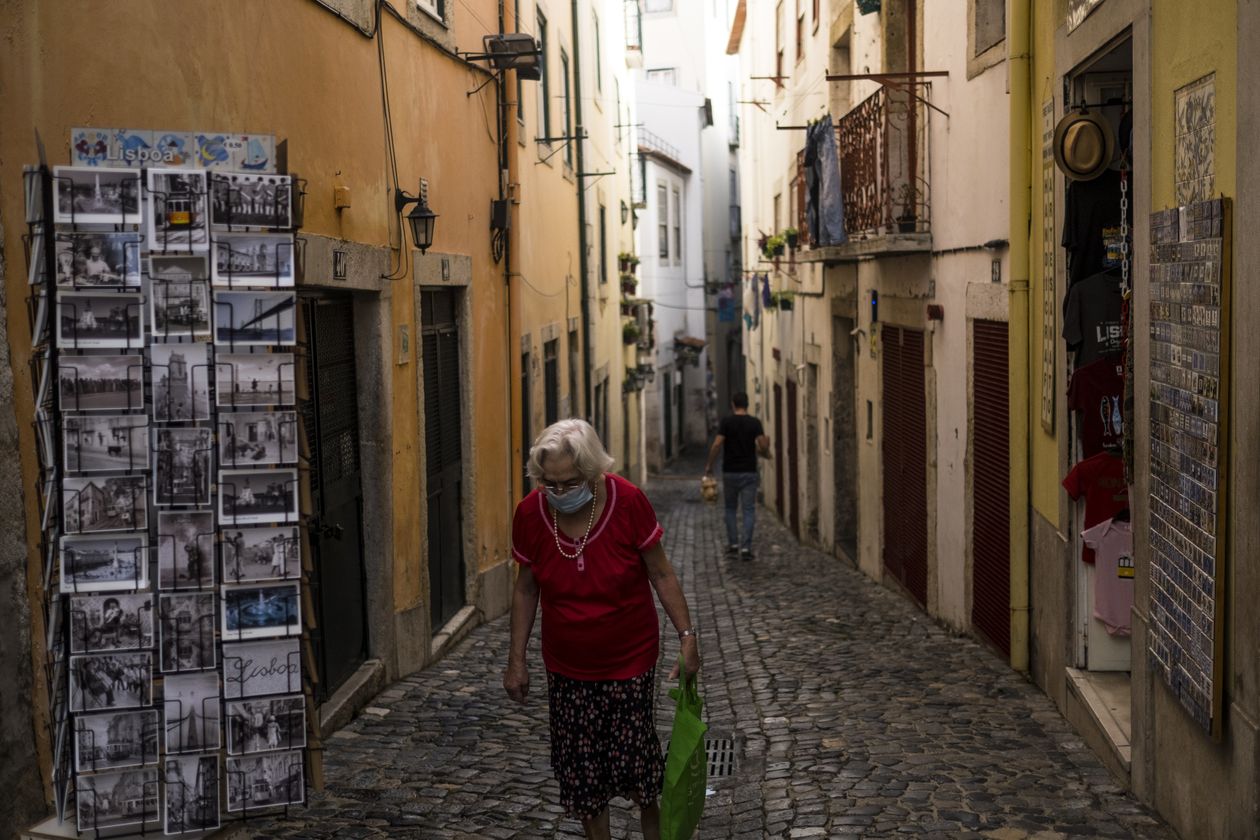 Close to 100% of people over the age of 50 have received at least one vaccine dose, according to the Portuguese government.

Write to Eric Sylvers at eric.sylvers@wsj.com 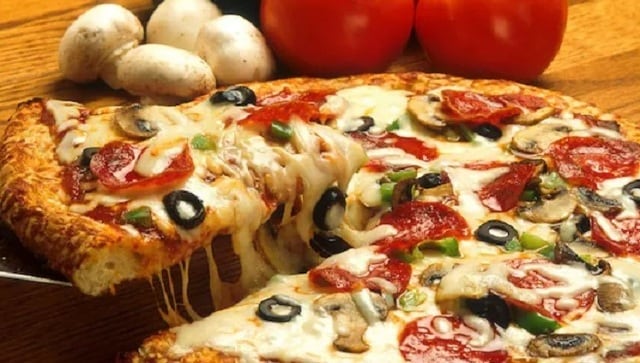