Passengers on board the aircraft reported hearing a loud bang not long after take-off (Picture: @JacdecNew)

An Emirates plane flew for almost 14-hours with a large hole in its side after passengers reported hearing a loud bang.

The Airbus A380 took off from the airline’s main hub in Dubai on July 1 heading for Brisbane in Australia.

Not long after take-off and once the plane was over the ocean, passengers reported hearing a loud bang but the crew decided to continue flying, landing in Brisbane some 13.5 hours later.

On the approach to the Queensland airport, aircraft crew contacted Air Traffic Control to request emergency services be on standby saying they suspected they had blown a tyre on takeoff, the Aviation Herald reports.

The aircraft landed safely but once on the ground emergency services were shocked to discover a large hole in the fairing on the lefthand side of the plane.

Fairing is added for aerodynamic reasons, producing a smooth outline and to reduce drag. 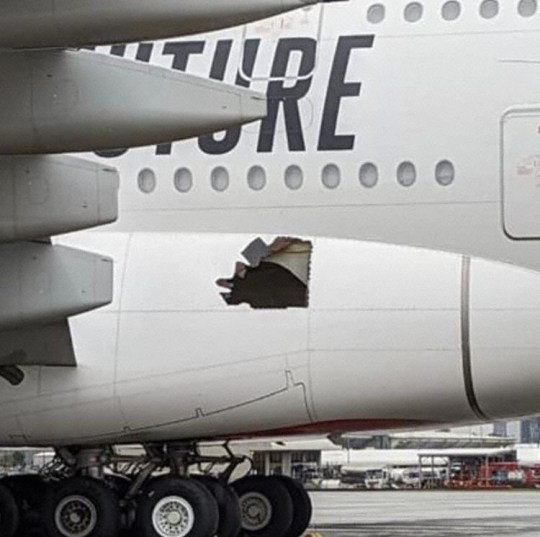 The damage was discovered when the aircraft landed (Picture: @JacdecNew) 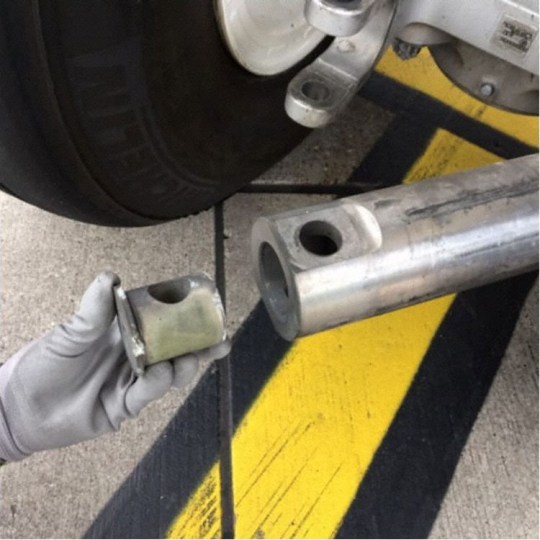 The damage meant the plane was unable to complete its return journey (Picture: @JacdecNew)

Inspectors also discovered a detached bolt in the nosegear, but it is not yet known if the two incidents are related.

The damage meant the plane was unable to depart for its return flight and was still on the ground in Brisbane about 17 hours after arriving.

One passenger reported hearing a ‘loud bang’ shortly after takeoff

‘There was a loud bang and I felt it through the floor as well,’ a passenger told The Courier Mail in Australia.

‘The cabin crew remained calm, stopped the food service and got on the phone and checked the wings, engines.’

A spokesperson for Emirates said the EK430 flight from Dubai to Brisbane experienced ‘a technical fault’.

‘One of the aircraft’s 22 tyres ruptured during cruise, causing damage to a small portion of the aerodynamic fairing, which is an outer panel or the skin of the aircraft.

‘At no point did it have any impact on the fuselage, frame or structure of the aircraft.

‘The aircraft landed safely in Brisbane and all passengers disembarked as scheduled.

‘The fairing has been completely replaced, checked and cleared by engineers, Airbus and all relevant authorities.

‘The safety of our passengers and crew has always been our top priority.’