Since Prime Minister Narendra Modi assumed office, he has toured several countries and also leaders from other parts of the world have visited India leading to enhancement of ties between India and other nations

Prime Minister Narendra Modi-led National Democratic Alliance government at the Centre is all set to complete its eighth year in office on 26 May. Besides carving out an image for himself as a global leader, Modi has also enhanced India’s position in the world since 2014.

Since Modi assumed office, he has toured several countries and also leaders from other parts of the world have visited India leading to enhancement of ties between India and other nations. During the meetings with leaders, Prime Minister Modi shared several memorable incidents which are still fresh in minds of people. Prime Minister Modi has held talks with Biden on several occasions ever since he became the US President in January 2021. The two global leaders met at the Quad Summit on Tuesday (24 March), where Biden praised the prime minister for handling the COVID-19 pandemic “successfully” and contrasted India’s success with China’s “failure” in dealing with coronavirus, PTI quoted a senior Indian official.

During a closed session of the Quad Summit, Biden said Modi’s success has shown the world that democracies can deliver, and busted the myth that “autocracies” like China and Russia can handle the rapidly changing world better because their leadership can take and implement decisions without going through lengthy democratic processes, the official stated on the condition of anonymity

Before this, in April 2022, Biden held a virtual meeting with PM Modi and welcomed India’s humanitarian support for the people of Ukraine.

In September last year, Biden had said that India and the US are launching a new chapter in historical ties and taking on some of the toughest challenges. Not just Joe Biden, Prime Minister Modi has also been a “great friend” of former US president Donald Trump. Whether it was “Howdy, Modi!” programme organised in the US or “Namaste Trump” event in India during the former US president’s maiden visit to the country, the friendship between the two leaders led to India-US ties grow from strength to strength.

At the “Howdy, Modi!” event at NRG Stadium in Houston back in 2019, Modi, in his style, vouched for Trump ahead of the 2020 US presidential polls, saying “Ab ki baar Trump sarkar” – modifying the ‘Ab ki baar Modi sarkar’ slogan coined for the BJP election campaign for 2014 Lok Sabha election. Prime Minister Modi’s friendship with Putin goes back a long way. Besides having several telephonic conversations from time to time, the two leaders met in December last year when Putin visited India for the 21st India-Russia Annual Summit.

During his visit, Putin called India as a “great power”, a “friendly” country and a “time-tested friend”.

Not just Putin, PM Modi also praised the India-Russia relations and said, “In the last few decades, the world witnessed many fundamental changes and different kinds of geopolitical equations emerged but the friendship of India and Russia remained constant”. He added that the relation between India and Russia is “truly a unique and reliable model of inter-State friendship”. A month back, UK Prime Minister Boris Johnson visited India and thanked his “khaas dost” Modi for an “amazing reception” that he received, stating that he felt like Sachin Tendulkar and Amitabh Bachchan.

During his two-day visit, Johnson visited the Sabarmati Ashram and the JCB factory in Gujarat, and later held talks with PM Modi where the two leaders discussed ways to enhance bilateral cooperation between the two nations.

Prime Minister Modi also termed the visit of UK Prime Minister to India as “historic” since it came during a time when India is celebrating “Azadi ka Amrit Mahotsav” to mark the 75th year of its independence. 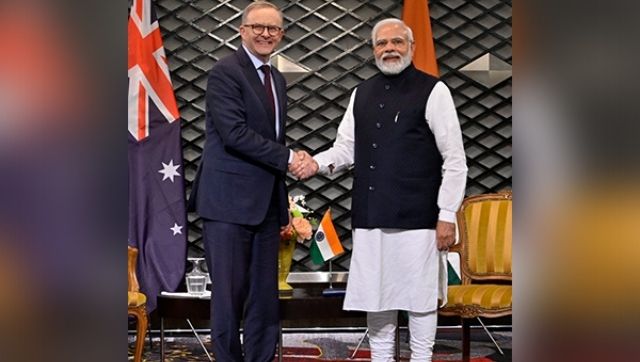 Prime Minister Narendra Modi held bilateral talks with Anthony Albanese in Tokyo, Japan on the sidelines of QUAD Summit. During the meet, the newly-elected Australian Prime Minister said that the relationship with India is very important and ties between the two countries have never been more closer.

Speaking to ANI, he said, “Our relationship with India is a very important one and it was a great honour to meet with Prime Minister Modi.” PM Modi congratulated Prime Minister Albanese on his election victory. Modi even gifted Albanese a Gond Art painting during his meeting with him. Japanese Prime Minister Fumio Kishida on Tuesday praised India’s contribution to the Quad Vaccine Initiative while recalling the country’s help to Thailand and Cambodia in extending all possible support to combat the pandemic. He also held bilateral meeting with Modi as the two leaders agreed to further enhance bilateral security and defence cooperation, including in the area of defence manufacturing.

Prime Minister Modi gifted a wooden hand-carved box with Rogan painting to his Japanese counterpart during the meeting.

Besides Kishida, Prime Minister Modi also met three former Prime Ministers of Japan. These meetings with Yoshihide Suga, Shinzo Abe, and Yoshiro Mori illustrate the huge goodwill and personal chemistry of PM Modi with the Japanese PMs. Yoshiro Mori is the current Chairperson of the Japan-India Association, while Shinzo Abe will be taking over this role shortly. Prime Minister Modi met French President Emmanuel Macron earlier this month in Paris where they discussed a range of bilateral issues including defence, space, civil nuclear cooperation and people-to-people linkages, as well as regional and global issues. In April, Modi had congratulated Macron on being re-elected as the President of France and called him a “friend”.

Back in December 2020, PM Modi had a telephone conversation with Macron and reiterated India’s full support to France in the fight against terrorism, extremism and radicalism. Prime Minister Modi during his tenure has held strong bilateral ties with Sri Lanka. This was seen recently when Sri Lankan Prime Minister Ranil Wickremesinghe expressed his gratitude to the “people of India” for handing over humanitarian assistance worth Rs 2 billion amidst the prevalent economic crisis on the island country.